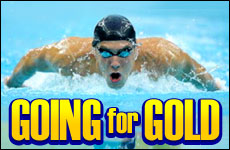 What a difference 1/100th of a second makes!

As I watched Jason Lezak come from behind to lead the US team to a gold medal, I was amazed by his drive and determination. What does it take to win by 8/100th's of a second? It means that you can never give up, not even for 1/100th of a second, that you are constantly going all out. There is not a moment that can be spared. Literally.

And in Phelps' 7th race, the difference was so minute that it was invisible to the naked eye. It could only be confirmed electronically. In that last 1/100th of a second, Cavic glided instead of stretch and Phelps touched the wall first.

That difference led to a world record number of gold medals, to the making of a champion.

I don't particularly care about the Olympics (although I confess a certain fascination). But I did learn a crucial life lesson from these swim meets, about what it means to really give your all. I don't know what was going through Jason Lezak's mind as he surged ahead to victory. Was he trying to insure Michael Phelps' place in history? His own place in history? Was he just focused on winning? Did he feel an extra sense of responsibility as the team captain? He probably doesn't even know.

But he left the crowd with more that the thrill of a last minute, come-from-behind finish. He left them with inspiration. I watched and I learned the meaning of going for broke, of not letting down your guard for even 8/100th's of a second.

The implications are obvious -- in our quest to grow, to learn, to battle our more base inclinations, to be the best we can be, every 1/100th of a second counts. "We cruise, we lose."

We can't slack off. If the US Olympic team can bring this level of drive and determination to swimming, surely we can bring it to the areas of our life that are much more important -- our marriages, our parenting, our relationship with the Almighty.

The Olympics do teach us about success. Not in the manner of the gymnast's father who told her that the only color that counts in their family is gold, but how to behave in the areas of life that really matter. If we apply these lessons to our personal lives and our personal growth, then we can all be champions.

Harry Potter and the War Between Good and Evil

It's Not About The Bike

"The Da Vinci Code" and the Jews

The World Series of Life
Deep Breaths
What Happened to the Truth?
The Japanese Everything Bagel Spice Recipe
Comments
MOST POPULAR IN Current Issues
Our privacy policy