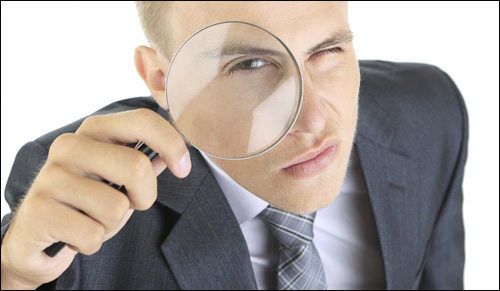 The best defense against abuse is to question what you see. Use your intellect to uncover inconsistencies and rationalizations.

In today's world, if someone asks, "How are you," the standard answer is "fine." In fact, a Jewish joke defines "nudnick" as someone who, when asked how he is, actually tells you!

A professional can immediately diagnose problems. The moment you walk through the door, the doctor says: "You're anemic." Or the car mechanic says: "It's the spark plugs." That's experience!

The 48 Ways says: Expose yourself to people who have mastered the art of questions. An expert on questions identifies the basis of the issue, sorts through the pertinent factors, determines what additional information is needed – and pinpoints the conclusion. That is power for living.

Basic questions can be applied to everything in life:

Practice these, and eventually asking good questions will become second nature to you. You have to be ready to deal with living. Because if you don't, the most profound wisdom can come your way… and it'll end up in the trash can.

We sometimes act in a way which contradicts our beliefs. "Questions and answers" helps us uncover our own inconsistencies and rationalizations. And unless we address and resolve these issues, we'll suffer from terrible confusion!

Open your eyes and mind to the irregularities in life. Don't just sit passively. If you see a contradiction, point it out.

To understand current events, you need to ask: What is the core of the issue? Why do people differ? Don't rely on analysts to give you their pre-digested opinion. You've got to do the job. Dig in and participate in the news intelligently.

There's a Jewish saying: "Nobody ever died from a question." This means don't be afraid to ask. There's nothing noble about remaining silent… and ignorant.

People might become annoyed when you start asking too many questions, or analyzing things to pieces. But don't let that stop you. Through analyzing, a person takes a concept from the abstract and makes it real. And that's making life fresh and alive.

Someone who doesn't learn the art of perceptive questioning is susceptible to all kinds of manipulation. In today's world, there's always someone eager to fool us into buying something we don't need.

The best defense against abuse is to question what you see. When you encounter a new idea or product, ask yourself: Why do I need this? What is the person's motivation in promoting this idea? This will sensitize you, protect you, and make you wise.

Ideas in a vacuum mean very little. But when juxtaposed, subtle distinctions begin to surface. A key aspect of wisdom is to see the relationships between concepts, and focus on the areas of similarity and contradiction. That's why it's so important to study history – to get a sense of context.

Life itself is full of contradictions. When confronted with any problem or situation, study the question and define the premise behind it. Ask: Is there anything that contradicts this idea? Try looking deeper into things and people. For nothing is ever as it appears on the surface…

For example: Can God make a rock so heavy that even He can't lift?

The answer is that there is a fundamental flaw in the question. The question assumes that infinities – an infinitely heavy rock and an Infinite God – are comparable. But as we should know from 10th grade math class, two infinities cannot be compared.

We all walk around with a bag full of unanswered questions. And though they may not appear to bother us, on a deeper level they absolutely do. Here's some nagging questions we all have:

Some people say: "There are no answers."

In truth, the point of all questions is the answers. Getting clarity is a long, tough haul. But don't stop! Personally I've been working on one question for 10 years, thinking about it at least twice a day.

Get your questions out of you. And start answering them.

Sit down, introspect, and see what important questions are left unresolved. If something's bothering you, don't let it fester. Put it in a list, and carry the list with you. Keep these questions in mind, readily available when you meet someone who might be able to provide insight.

Apply your Q&A skills to all aspects of living. For example, if you want to get married, make sure you know the right questions to ask. Many people get bounced out of marriage because they don't have the right definition going in. Their expectations are based on a Hollywood script.

Figure out what marriage is all about. Is it an arrangement? A contract? A tax shelter? Domestic help? Companionship? A way of living cheaper? A ritual to satisfy stodgy grandparents?

Judaism says: "Marriage is the commitment that a man and woman make to pursue their life goals together." It's a holy bond between two people who become as one. It gives strength to the individual as well as to the unit. It brings fulfillment, friendship, family, and much more.

Don't walk down the aisle until you know:

In Western society, parents take a child's first pair of shoes and have them bronzed. It's a reminder of when the baby achieved a level of maturity and independence. In Judaism, we immortalize something else – a child's first analytical question, the first time he caught a contradiction. That's independence!

The importance of good questions is engrained in Jewish national consciousness. We see from the episode of the Burning Bush, that the wise Moses posited the point of contradiction: "The bush is burning, but it is not consumed."

At the Passover Seder, children are encouraged to ask the famous Four Questions. The Seder also speaks about four children: one wise, one bad, one simple, and one who does not know how to ask. Each is defined by the type of question he asks.

A yeshiva is a school to learn the skill of analyzing and asking probing questions. The guidebook is the Talmud – the world's greatest Q&A manual. The Talmud is built on digging for contradictions, and over the centuries, Jews have developed this into a fine art.

Sometimes the Torah text will be very terse. Why? To prompt us to ask investigative, analytical questions. Torah requires great effort to work it out on our own, and the more we study, the more we sharpen our tools for independent analysis.

If you study enough questions, you pick up patterns and your brain begins to think in that analytical way. You've heard of the graduate degree called Doctor of Letters? Yeshiva students earn a Ph.D. of Questions. And the star of the yeshiva is the one who can ask the best question!

A Piece of Talmudic Logic

An apocryphal story from the last century goes like this:

A Jewish scholar from Odessa was granted permission to visit Moscow. He boarded the train and found an empty seat. At the next stop a young man got on and sat next to him.

The scholar looked at the young man and thought: This fellow doesn't look like a peasant, and if he isn't a peasant he probably comes from this district. If he comes from this district, he must be Jewish because this is, after all, the Jewish district. On the other hand, if he is a Jew where could he be going? I'm the only one in our district who has permission to travel to Moscow. Wait – just outside Moscow there is a little village called Samvet, and you don't need special permission to go there.

But why is he going? The Steinbergs have only girls, so maybe he's their son-in-law. But if he is, then which daughter did he marry? Sarah married that nice lawyer from Budapest, and Esther married a businessman from Zhadomir. So it must be Sarah's husband. Which means that his name is Alexander Cohen, if I'm not mistaken.

But if he comes from Budapest, with all the anti-Semitism they have there, he must have changed his name. What's the Hungarian equivalent of Cohen? Kovacs.

But if he changed his name he must have some special status. What could it be? A doctorate from the university.

At this point, the scholar turns to the young man and says, "How do you do, Dr. Kovacs?"

"Very well, thank you," answered the startled passenger. "But how is it that you know my name?"

"Oh," replied the scholar, "it was obvious."

Why is "Analyze the Issues" a Way to Wisdom?

Way #41: Getting Into Reality

Way #20: The Art of Conversation

Way #9: Total Concentration
Bechukotai 5782: Divine Retribution
Behar 5782: Working to Live or Living to Work?
The Wholeness of Being Broken
Comments
MOST POPULAR IN 48 Ways
Our privacy policy