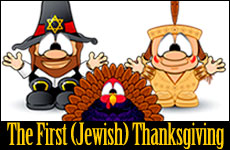 The Academy of Obscure Jewish History reveals that the actual first American Thanksgiving took place between Native Americans and Jews.

In school, we all learn the story of the first Thanksgiving in America, with the Pilgrims from England and the Native Americans from – well, whatever they called this place before we renamed it America. Not one word is said about the actual first Thanksgiving, the one involving Jews. I'm here to correct this outrageous oversight. But first, a little historical perspective. The Pilgrims, who crossed the Atlantic, landed into a bleak November winter and saw half of their numbers perish during the course of the cold season, as food was in short supply after the long journey and space heaters and thermal underwear had not yet been invented.

Having had better luck through the subsequent summer, the grateful people established a day of thanksgiving and invited the local Indians to share their bounty and play Charades. According to historical records, the Pilgrims and Indians got together in 1621, in the Virginia Colony. The two cultures shared a harvest feast and exposed one another to their strange and wonderful cultural and culinary offerings, and then settled in to watch Superbowl I.

Squanto, a Patuxet Native American who resided with the Wampanoag tribe, taught the Pilgrims how to catch eel and grow corn and served as an interpreter for them (Squanto had learned English as a slave in Europe and from watching reruns of "The Brady Bunch"). This explains the popularity of today's traditional Thanksgiving culinary favorite – Eel Corn Surprise – which is slightly less slimy, although tastier than its predecessor, Jellyfish Corn Surprise. In exchange, the Pilgrims taught the Native Americans how to steal an entire continent from a proud people who had been thriving there for centuries. But I digress.

218 Jewish settlers, under the leadership of Captain Yitzchak Eliezer Tsvi, landed on the north bank of the Farblondzhet River.

And now, the shocker. New research just made public by the Academy of Obscure Jewish History reveals that the actual first American Thanksgiving took place, three years earlier in 1618, in a part of the North American continent that would later come to be known as the Catskills. 218 Jewish settlers, under the leadership of Captain Yitzchak Eliezer Tsvi, landed on the north bank of the Farblondzhet River. They immediately began networking and setting out to develop important career contacts. Before long, they encountered the Ongepatsht Indians, a tribe of Native Americans who came to view the Jewish settlers with suspicion after the settlers attempted to rent the Ongepatcht's land back to them at exorbitant rates.

Finally, the settlers managed to find a Jewish Indian, Speaks With Shpilkes, to serve as their translator and guide to Ongepatsht culture. Speaks With Shpilkes taught the Jewish settlers how to catch wild turkey and prepare it in the kosher style, to catch salmon and turn it into lox and nova, and to create a tzimmes so luscious it would bring tears to your eyes. In exchange, the Jews taught Speaks With Shpilkes how to create and operate a pawnshop, and the differences between a Roth and a traditional IRA account.

Following a draught, Speaks With Shpilkes urged the Jews to undertake a course of prayer and fasting to bring on the much-needed rain. While seeing where he was coming from and admiring the spirit of his suggestion, the Jews responded that they were okay with the prayer part, but they weren't big fasters. Unless the fast was from breakfast to mid-morning snack, they'd end up getting low blood sugar and snapping for no reason at their friends, family, and deliverymen. Speaks With Shpilkes understood and proceeded to do a "Kakameyme" – a traditional Indian rain dance. It worked. It poured. The crops were saved. And a decision was made to host a celebratory meal to give thanks to God for His bounty. The Ongepatsht Indians would be invited and the Jews briefly considered having the affair catered before finally deciding to do it all themselves to save money.

And so, with Speaks With Shpilkes as their culinary consultant, the Jewish settlers proceeded to create the first Thanksgiving feast of the new world. Highlights included: Gefilte Fish Totem Pole, Matzoh Teepees, Kishke-shaped peace pipe, and Eel Corn Tomahawks. For their part, the Ongepatsht tribe brought Torah-shaped salmon souffle, yarmulke-shaped bowls filled with buffalo soup, and deer and antelope filets in the shape of doctors and lawyers. There was even a giant ice sculpture of one of the Jewish setters doing one of the Indians' taxes.

There was even a giant ice sculpture of one of the Jewish setters doing one of the Indians' taxes.

Following the peaceful dinner, the Ongepatsht guests invited their Jewish settler hosts to join them in a sweat lodge, an oblong hut in which heated stones were placed in a central pit in the ground. It was a purifying ritual in which singing, chanting, wailing and drumming took place, otherwise known to the Jews as "The Shvitz."

Later, the Jewish settlers introduced the Ongepatsht Indians to something they'd never before experienced – a wholesale clothing store. There, the Indians were each permitted to select one free garment and were given a 50% discount on any needed alterations. In exchange, the Indians treated their Jewish guests to an exciting visit to the world's first casino. After a spirited evening of drinking, gambling the celebratory party entered the casino showroom for a special performance by the famed Native American stand-up comedian, Shecky Powwow. Highlights: "Take my scalp, please!" "Why do Indian husbands die before their wives do? Because they want to." "I don't get no respect. I looked up my family totem pole and found three dogs using it."

Needless to say, the first Thanksgiving celebration was a huge success. Although, according to the Academy of Obscure Jewish History, it was far from the only momentous Jewish historical contribution that has been overlooked. Apparently, Jews also failed to receive credit for their having invented the wheel, given Gandhi his whole "look," created barbecue, discovered electricity, and shortened the title of James Brown's originally-titled, "I Feel Fairly Decent Considering the State of the World and a Number of My Own Economic and Psychological Issues" – to "I Feel Good." Now, that's something for which we can all be thankful.