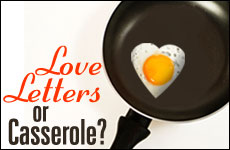 The proper path to romance, and Elul.

Shortly before I got married, I entered headlong into a massive controversy that was brewing amongst my friends, a number of whom where getting married at about the same time as me. The question with which we grappled was how to treat our wives right after we got married.

Should we go "all out" in our interactions with our spouse immediately after marriage? Should we write them little love notes every day, make heart shaped mosaics of rose petals for them to see when they get home from work, cook them four course dinners, compliment them multiple times daily on their intelligence, sensitivity, and looks, and hire a mariachi group to softly serenade them while they eat candlelit dinners overlooking the Pacific ocean crashing ashore? (Okay we didn't really discuss the mariachis. Who wants five guys in glittering pants crashing your romantic dinner?)

It may seem that this is obviously the ideal way for a man to treat his newly-wed wife. So what could be the other position in this debate?

The other stance posits that if you treat your wife that way for those first few months, you're setting yourself up for failure. Six years down the line, you will have three little kids running around the house, you'll have to work 60 hours a week just to be able to afford formula and diapers, when you come home from work your wife will be buried in mounds of laundry, and all you'll be greeted with is two smelly diapers and a mini Picasso who has been using the wall as his canvas.

All the mariachis are going to seem as far as the International Space Station, and the only love poem you can think of is, "Roses are red, violets are blue, I wish there would only be one dirty diaper, but there are actually two!" Your wife is going to feel very let down. Where is her romantic guy who just wanted to stare into her eyes for hours and tell her why she was so great? Where is the guy who used to cook her dinners, write her love letters, and pick her up from work on a white horse?

The second position states that it is better to start off life normal; tuna casserole and green beans for dinner, and a maximum of two compliments a day. Doing this will set the stage for a blissful marriage in which no one will ever feel let down, neglected or forgotten because it will have the same tone throughout.

So what's a guy supposed to do?

My answer is based on a phrase that has been a guiding light in my marriage, and one that applies in all areas of life equally well: "Do when you can, so I'll know that when you can't, you would've if you could've!"

Everyone knows that a person can't function at peak performance all the time; that is part of the human condition. But if you operate at your maximum when you can, that indicates that your heart is truly behind the endeavor, and it is only outside circumstances that get in the way of your non-optimal performance. If I go "all out" in the beginning of my marriage, even when I won't be able to later on, my wife will have the confidence that I would be doing more if only I could.

This idea actually helps us understand better the period we just entered -- the Jewish month of Elul. It has traditionally been a month in which people work extra hard in their spiritual pursuits, trying to score as many points as they can before the buzzer -- Rosh Hashana, the Day of Judgment.

Some people see this as hypocritical -- every year we suddenly work on ourselves at this point in the calendar and then, as soon as Yom Kippur passes, we go back to our old selves. But the truth is that God understands that we can't necessarily run at peak performance all year round, so He gives us a time when He tells us that He will be extra close to us. If during that time we go the extra mile, then God knows that in our hearts we really want to be living on that high spiritual plane all year long; we're just bogged down by the challenges of daily life.

Not only does God know that, but we begin to internalize that message as well. This way, throughout the year, we can slowly try to incorporate into our life the practices that we instilled in ourselves over the course of Elul.

While we struggle to make Elul into the spiritually infused month of the year that it was designed to be, let's remember, "Do when you can, so I'll know that when you can't, you would've if you could've!"

5 Marriage Mantras to Live By

8 Tips to Improve Your Marriage Under Lockdown

Unemployment and Your Marriage