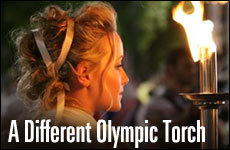 What no Jew can ignore.

As the world revs up for the 2008 Beijing Olympics, a different kind of torch is being relayed around the globe. It is the Human Rights Torch Relay, a campaign to stop the despicable persecution of prisoners of conscience in China. The campaign especially focuses on the persecution of the Falun Gong, a spiritual movement tens of thousands of whose practitioners are being held in 36 slave labor camps throughout China.

The Human Rights Torch will pass, with accompanying events, through 37 countries in six continents. It arrives in Israel on February 18. To receive the torch and the mandate it represents, a mass rally will be held on the grounds of the Tel Aviv Museum at 5 PM.

The motto of the Human Rights Torch Relay [HRTR] is: "The Olympics and crimes against humanity cannot coexist in China."

In 2006, reports began to circulate that the Chinese authorities were harvesting organs -- hearts, lungs, livers, etc. -- from live Falun Gong prisoners and selling them on the lucrative organ transplant market. The allegation was so grotesque that many people dismissed it as an urban myth.

Organs were being taken out of the bodies of thousands of live, healthy prisoners to supply the booming Chinese organ market.

The government of Canada, however, appointed two respected attorneys, David Matas and David Kilgour, to investigate the allegations. On May 8, 2006, they submitted their report. The report confirmed the worst -- that organs were being taken out of the bodies of thousands of live, healthy prisoners of conscience to supply the booming Chinese organ market.

"The atrocity is so great that there are simply no words to express it," stated Rabbi David Druckman, Chief Rabbi of Kiryat Motzkin. "It is especially incumbent upon us as Jews to lead the campaign that expresses total disgust at this phenomenon."

Rabbi Yosef Shalom Elyashiv of Jerusalem is the world's leading halachic authority. Rabbi Elyashiv was asked by an Orthodox Israeli doctor who was hired to accompany a Jewish patient to China for an organ transplant if such transplants were permissible, given the likelihood that a human being was murdered to provide the organ. Rabbi Elyashiv ruled that it is absolutely forbidden to receive an organ transplant from such a source, even if one's own life is at stake.

Several months ago, over 220 Israeli rabbis, academics, and politicians signed a petition calling for an end to the Chinese atrocities. In a rare show of Jewish unity, the signatories included the entire Israeli spectrum from the right to the left, from religious to secular.

Between 2004 and 2007, about 20 Israelis received heart transplants in China, 10 received liver transplants, and some 200-300 received kidney transplants. In 2007 all Israeli health funds agreed to refuse funding for organ transplants in China and other ethically questionable locations. Tal Babich, an Israeli Falun Gong supporter, points out that while organs are being stolen from victims in Turkey, the Ukraine, and India, these crimes are being perpetrated by Mafia-like elements. Only in China is the government itself behind the forcible extraction of organs.

WHAT'S THE VALUE OF HUMAN LIFE?

Falun Gong began in China in 1992. Today the movement has over 70,000,000 adherents in China and many thousands abroad. Falun Gong believes in the Divine, and advocates the cultivation of three principle traits: truthfulness, compassion, and forbearance.

Borys Wrzesnewsky, a Canadian parliamentarian, observed that while the atrocities being perpetrated against the Falun Gong by the Communist government of China are horrific, they are not "shocking," in the sense of surprising. Communism is, after all, an atheistic system, doctrinally opposed to belief in God and spirituality. [Witness the genocide that the Chinese Communists committed against Tibetan Buddhists.] Moreover, he points out, Communism believes that everything can be reduced to economic factors. A human being, therefore, has a purely economic value, either as a worker or, in the case of political undesirables, as the possessor of organs worth hundreds of thousands of dollars. "Harvesting organs" from a human being in the same way that one harvests cucumbers from a field is thus perfectly consistent with Communist ideology.

The Torah introduced to the world a different value system. According to the Torah, human beings are valuable because of their spiritual essence, because they are created "in the image of God." While the ancient Greeks, the originators of the Olympic games, were practicing infanticide of babies who were undesirable because they were girls or handicapped, Jews were asserting the inviolable sanctity of human life.

Jewish law requires us to spread the values of faith in the Creator and of maintaining the ‘image of God' throughout the world.

"We as Jews must therefore stand at the front lines of this war," asserts Rabbi David Druckman, "and employ every possible tactic in order that the world expunge atrocities such as this. Jewish law requires us to spread the values of faith in the Creator and of maintaining the ‘image of God' throughout the world. The same Torah that tells us to keep the Sabbath and to eat only kosher food also requires that we [ethically] influence all of mankind."

So what can we do? HTHR recommends three lines of action:

We dare not remain silent.

A Tribute to Senator Moynihan
The 21st President of the United States: Failure or Inspiration?
Hiding Their Jewishness
The Jewish Pope: Following the Questions Home
Comments