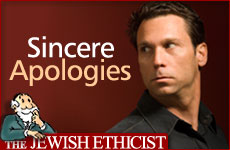 My friend has unjustified resentment towards me. What should I do?

Q. A friend is bearing a silly grudge from a supposed wrong. What recourse do I have?

A. It's too bad your friend is bearing a grudge. The Torah warns us (Leviticus 19:18), "Don't take vengeance and don't bear a grudge against the children of your nation; love your neighbor as yourself, I am the Lord." What is the difference between vindictiveness and bearing a grudge? Rashi explains as follows:

However, one thing we notice from Rashi's explanation is that the examples refer to cases where one person failed to do a favor to another -- not a case where someone was actually wronged. Expecting or demanding an apology for a perceived wrong is fair and is even a fulfillment of the previous verse in the Torah: "Don't hate your brother in your heart; surely reprove your fellow, and don't bear sin towards him." By clearly stating his expectations from you, your friend is giving you reproof, which is far better than the kind of seething resentment the verse warns against.

Even if you have made good the wrong, the wronged party still has the right to an apology as well. The Talmud states that for wrongs against our fellow man, even the holy and solemn Day of Atonement, Yom Kippur, cannot atone until the wronged party is appeased.(1)

You seem to feel that your friend's resentment is unjustified. If so, then you should clearly explain your position. The great Medieval sage Nachmanides explains that one reason we reprove someone when they think they wronged us is to give the party supposedly at fault the opportunity to defend himself, and you should avail yourself of this opportunity. Perhaps you think you yourself deserve an apology; then you can fulfill the commandment of gentle reproof.

Sometimes the relationships between people can be so charged that they can't really resolve their differences. In this case it may be useful to have someone mediate the disagreement. Tell your friend you don't really think you did anything wrong; perhaps you even feel he owes you an apology. But offer to discuss the case with some neutral person you both respect.

I would offer two additional insights. One, sometimes it is OK to apologize even if you are right. In the public sphere this can make you seem like you won't stand up for your beliefs, but with a friend this may be the wisest course of action, unless the friend is a particularly manipulative individual. "The rabbis taught: Those who are insulted yet do not insult others, hear themselves reviled yet don't respond, act through love and rejoice in tribulations – of these Scripture states, "And those who love Him are like the sun in its might". (2)

Another insight is that very often when a person expresses resentment over something inexplicable, their true resentment is over something else entirely. It is worth reflecting on whether your friend may be nursing an entirely different wrong, or perceived wrong, than the one he is mentioning. Considering this possibility may put you back on the right track to restoring good relations.

Above all, time is the great healer. Few people have the strength to carry around grudges for a long time.

The Jewish Ethicist: Oldies are Goodies
Blessing on Chewing Gum
Was Rahab a Prostitute?
Extras In Our Own Epic
Comments
MOST POPULAR IN Current Issues
Our privacy policy