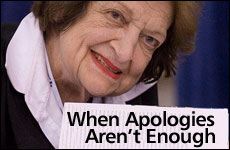 Why we should not forgive Helen Thomas.

In the aftermath of the Helen Thomas fiasco, the bloggers and the pundits and the second-guessers are having a field day.

Why are we harassing her, they ask, just because she happened to respond to a rabbinic interviewer on the lawn of the White House with the kind of vitriolic anti-Semitic venom worthy of Nazi propaganda minister Joseph Goebbels in his heyday? Yes, she did say Jews should get the hell out of Palestine and go back to the places they came from like Germany and Poland, (although she would probably concede that 6 million of them would be spared making the trip because they are already interred there as victims of the Holocaust).

But that's not the point, we're beginning to hear from some in the media. She may have said something that's unjustifiable, but come on, she did finally apologize.

When faced with public outcry and the realization that she had gone too far for any kind of reasonable defense, she managed to come up with this remarkable supposed expression of contrition:

"I deeply regret my comments I made last week regarding the Israelis and the Palestinians. They do not reflect my heart-felt belief that peace will come to the Middle East only when all parties recognize the need for mutual respect and tolerance. May that day come soon."

She is "sorry" to be losing her front row seat at White House press conferences.

While they may not reflect her “heartfelt belief” about how peace will come to the Middle East, they certainly made admirably clear her feelings about Jews and her insensitivity to the horrors they experienced in the lands she would wish them to consider their national homelands in place of their biblical heritage – something to which she seems totally oblivious.

There is absolutely nothing about this apology that smacks of an apology. There is no remorse about having gone beyond the pale of civilized discourse or of realizing upon reflection that her remarks were not only intemperate but illogical, insulting and totally lacking any vestige of the “mutual respect and tolerance” she claims as her guidelines.

It is an apology clearly motivated solely by the price she now realizes she had to pay for truthfully baring her soul. She regrets not so much the content of what she said as the recognition that the public is appalled by the discovery of her innermost feelings. So she is sorry. Sorry that her speakers bureau dropped her. Sorry that she was disinvited from serving as the keynote speaker at a graduation ceremony in Washington. Sorry that she was forced into retirement from the Hearst Corporation, sorry that her 90th birthday party to be attended by President Obama was cancelled, and sorry that she is losing her front row seat at the prestigious White House press conferences.

And yet there are those foolish enough to express outrage at our inability to embrace her once more in spite of her admitted “mistake” because according to their mindset an apology, no matter how exculpatory, incomplete or comprehensible, should trump any offense.

Paul Jay, CEO and Senior Editor, Independent World Television, is incensed that “Her apology was not enough to stop calls for her head from those who have wanted to shut Thomas up for years.” In the mad world of spin, it's just a short hop from villain becoming victim. Poor Helen, go the bloggers, “crucified” – and the choice of that particular word is not by coincidence – by a press obviously controlled by Jews, as we so convincingly know from the Protocols of the Elders of Zion.

It seems that everything is beyond reproach, as long as we go on TV and apologize.

Eric Stoltz perceived a profound truth about contemporary American morals when he noted, “It seems that whatever we do is somehow beyond reproach – murder, rape, drunk driving – as long as we go on a TV show and apologize."

The past year has seen an incredibly long list of sinners who sought our forgiveness simply because they said the magic words “I'm sorry” without regard to whether their regret was accompanied by any personal transformation. From politicians caught stealing to celebrities caught philandering to CEOs and Wall Street titans caught misappropriating, mismanaging and misleading to policemen aiding and abetting criminals - a tearful confession was offered as bribe to our sense of compassion.

And amazingly enough in many cases it worked.

Americans are all too often forgiving beyond reason. Sometimes, it's true, that may be a virtue. Forgiveness can help to redeem someone who had a momentary lapse of judgment. Forgiveness has its place if the sinner has truly learnt his lesson and is no longer the same person who sinned.

But undeserved forgiveness for incomplete and unworthy apologies heaps yet another layer of evil on the original wrong, even as it improperly absolves it. It puts the stamp of permissibility on actions that deserve only continued revulsion.

Red Auerbach had it right: "The only correct actions are those that demand no explanation and no apology."

That's why it's important to note that not only didn't Helen Thomas offer any real apology for her despicable comments but even if she had truly apologized, not every apology deserves automatic forgiveness, just as not every crime can be ignored without punishment. And if that is a judgment that seems too harsh, please let me make clear that I don't apologize for it.

Lost & Found
The Joy of Fasting
The 21st President of the United States: Failure or Inspiration?
Hiding Their Jewishness
Comments