Oblivious to the Music 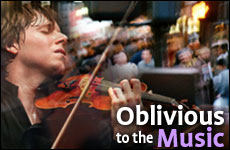 Would you notice one of the world's greatest violinists playing in the midst of rush hour?

What would happen if one of the greatest violinists alive, playing on a Stradivarius worth several million dollars, was plunked into the sterile environment of a Washington D.C. metro station at the height of morning rush hour? Would anyone stop to listen? Would anyone recognize the genius, the soaring beauty of the playing?

Gene Weingarten, a Washington Post staff writer, was determined to find out.

The idea was born two years ago, when Weingarten left a crowded metro station and noticed a ragged-looking man playing the keyboard. The musician was quite good, but he was receiving virtually no notice. Looking at the amorphous mass of humanity rushing by, Weingarten felt a surge of anger. The thought crossed his mind that even the greatest of musicians wouldn't be able to touch these rushing creatures. But he decided to test his hypothesis before indicting the public.

The result was an intriguing social experiment. Weingarten approached Joshua Bell, one of the finest classical musicians in the world. Bell, 39, is a consummate violinist who plays before awe-struck crowds across the globe. His instrument is a violin crafted by Antonio Stradivari in 1713, at the end of the Italian master's career. Bell purchased the violin at an auction several years ago, for 3.5 million dollars. Bell and his violin are musical mastery at its absolute height.

Bell acquiesced to the request with surprising ease. Finding a venue proved more difficult, as metro laws forbid busking, but Weingarten overcame this obstacle when he discovered a station with an indoor arcade owned by a private company. The owner graciously agreed to allow the experiment to take place. The stage was set.

On Jan. 12, 2007, at 7:51 on a Friday morning, Bell, dressed in jeans, a long-sleeved T-shirt, and a Washington Nationals baseball cap, opened his violin case, threw a few dollars in as seed money, and began to play. The pieces he performed were not popular, well-known ditties. They were complex, breathtaking masterpieces that have endured for centuries. Bell put his heart and soul into his music, coaxing pristine, resonant notes from his instrument. He played six pieces in 43 minutes.

During that time, 1,097 people walked by the virtuoso.

Only seven stopped to hear the music for more than a minute.

Twenty-seven tossed in some money while hurrying on.

The rest rushed by in oblivion.

Weingarten wrote up the results of his experiment early April in the Washington Post, two days before Joshua Bell accepted the Avery Fisher Prize, the greatest honor a classical musician in America can receive.

Cry for the rush of life which sucks up the essence of life itself.

And the reactions poured in. "This story got the largest and most global response of anything I have ever written, for any publication," remarked Weingarten. Over 1,000 comments came from around the globe. More than ten percent of the readers wrote that the article made them cry. Cry for the deadened souls that couldn't stop to appreciate the beauty that surrounded them. Cry for the lost moments, the opportunities that slip through our hands never to return. Cry for the rush of life which sucks up the essence of life itself.

Like the vast majority of readers, I found myself contemplating how I would have reacted had I been at the L'enfant Plaza station in D.C. that Friday morning. Surely, I thought, I would have noticed the brilliant music, even if I was rushing past on my way to work. How could I not have been one of the select few who grasped that this musician, this music, was different?

I didn't have long to ponder. A pressing doctor's appointment pulled me away from my computer screen. I gathered up my jacket and purse, and raced half a block to catch the next bus. Rushing down the familiar street, I was surrounded by the tantalizing beauty of spring. To my left, an apple tree was just beginning to bud, the small sapling crowned with a shower of delicate white blossoms. Further along, a garden boasted irises in full bloom, their deep purple heads nodding in the soft breeze. Above, fluffy clouds raced each other on a blindingly blue sky.

But, in my haste that morning, I saw none of it. I was deaf to the music surrounding me on all sides.

50 Violinists from 50 States, One Big Thank You

My Sister is Starving Herself to Death

United in Soccer
Why Are The Prayers Of Yom Kipur So Repetetive?
Ha'azinu 5783: A Time for Unity!
Twisted Thinking
Comments