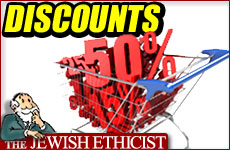 A Jewish view on fair pricing.

Q. I have a standard price list, but I'm pretty liberal about giving discounts when I need to make a sale. Is this a problem?

A. Adam Smith noted that economic progress is dependent "a certain propensity in human nature," namely "the propensity to truck, barter, and exchange one thing for another". After all, Smith notes; "Nobody ever saw a dog make a fair and deliberate exchange of one bone for another with another dog."

However, people nowadays seem to prefer facing predictable prices over having to haggle over every exchange, and so most sellers today have standard prices which apply equally to all customers.

The Jewish approach to "fair" pricing is very lenient. There is no fair price doctrine in Jewish law, and except for a few regulated staples a seller is allowed to charge any price he likes for his wares. At the same time, the Jewish approach to transparent pricing is very strict. The demand for a transparent pricing policy stems from two distinct though related prohibitions: the prohibition on overcharging, known as onaah, and the prohibition on misleading practices, known as geneivat da'at.

The prohibition on overcharging, or underpaying, is learned from the following verse: "When you sell to your fellow or buy from the hand of your fellow, don't oppress each man his brother" (Leviticus 25:14). From the context of the verse we see that the "oppression" refers to overcharging, and the rabbis inferred that it applies equally to underpaying. However, this prohibition is breached only when the price deviates significantly from the customary market price without the customer's knowledge. If the seller says, "Other stores sell this object for ten dollars, but I won't sell it for less than 20", there is no onaah. (Likewise if a customer tells the seller, other stores are selling this item for ten dollars but I'm only willing to give you five.) Since the prohibition is contingent on the buyer's reasonable expectations, and can be waived, we see that the main emphasis is on transparency.

A separate transgression is known as geneivat da'at. This is breached when the buyer is misled regarding the price of an object, even if the price itself is fair or even a bargain. A classic case of geneivat da'at in a commercial context would be advertising a product as on sale when it is selling at its usual price, or even advertising "50% off" when there is a genuine discount but it is more modest.

In your case, there is no problem if you generally charge a particular price but once in a while you show flexibility for someone who is needy or particularly stubborn, etc. The average customer is justified in believing that he is paying the going price. Assuming the law allows it, you can also decide to give discounts to a particular class of customers: local residents, college students, soldiers, etc. If you publicize these discounts, then anyone who frequents your place of business knows the score.

The problem is if the exception becomes the rule and you make so many "discounts" that the list price is only for suckers. I was once in a clothing store with a prominent sign saying that all prices are non-negotiable. The sign should have made me suspicious, because normal stores where the prices really are non-negotiable don't have signs like that. Anyway, it turns out that even without any negotiation on my part the salesman offered me "discounts" on everything I bought – discounts that still left the prices a bit above what was accepted in other stores. Anyone who paid the label price would have been ripped off not only relative to other stores, but even in relation to what other customers were paying in the same store.

Besides the ethical concern there is also a practical one. When you are too flexible with your pricing you open yourself up to constant demands for discount which can wreck your markup.

So it is okay for you to offer an occasional discount to make a sale, but you should try to make sure that they remain truly occasional.

The Jewish Ethicist: Charity and Providence

The Jewish Ethicist: Job Hunt Disclosure
Near Death Experience Panel
The Western Wall: The Heart of the World
Ask the Right Question: Tisha B’Av
Comments
MOST POPULAR IN Current Issues
Our privacy policy
Aish.com Is Looking for Great Writers