Finding My Place on the Jewish Bookshelf 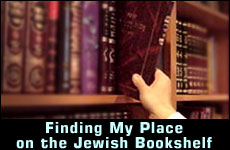 The beauty of Jewish learning is that one needs is an inquisitive mind and a desire to find what being Jewish is all about.

My earliest recollections of life are brimming with images of my father pausing to smile up at me or to contemplate an idea surrounded by disarrayed stacks of books and shelves teeming with volumes upon volumes of texts. It was my father's unquenchable thirst for knowledge and information that precluded my fundamental respect for the written word.

Books were revered, loved and treasured. Well before I possessed the ability to decipher what was inside of them, I was imbibed with the message that all books -- and Jewish books in particular -- were to maintain a dignified place in the hierarchy of my world. I was taught to tenderly kiss a sacred Jewish book before returning it to its place, as I did the Torah scrolls as they were circulated through the congregation during Shabbat services.

What is it about Jewish texts that have served to unite us as a people? After all they're just a bunch of words on bound pages, why have they played such an integral part of the very survival of the Jewish people?

People of the Book

Our standing as the People of the Book is as ancient as our nation itself. Midrashic mentions of the patriarchs depict an intense commitment to study, like Jacob who preferred the pursuit of scholarship at the academies of Shem and Aver to his brother's life of barbary and hunting in the fields. The Torah is the pinnacle of our shared Jewish legacy. It was proffered to us at Sinai and every Jew, each from his vantage point and specific ideological perspective has the innate right to reclaim his connection to its teachings.

Throughout the trials and tribulations of Jewish history the Jews continued to study. The transcription of the Oral Law, the volumes of responsa literature, the countless exegetical commentaries and philosophical, halachic and historical works attest to the Jews mastery of scholarship and their proficiency at recording and preserving ideas through the written word.

Teaching a weekly Torah portion class to a multinational group of elderly women, I am continually reminded of the power of Jewish learning. The Moroccan women explained that in their country Jewish books were so rare that those lucky enough to be schooled would have to share the text with up to twenty other students and had accordingly picked up the skill of reading sideways, diagonally and upside down.

Another woman who had spent several months in a Nazi labor camp in Austria recounted how on Yom Kippur, after someone had succeeded in passing a copy of a High Holiday prayer book into the camp, it was torn apart and each Jew was given one page of the services. The Jews were forced to treat the day as any other and they put in their grueling hours of hard labor, but at the same time each of them clung to their tattered page of the prayer book, combining to offer up a sorrow filled collective prayer to their creator.

Many Jewish Soviet refusniks were imprisoned in Siberia and tortured for their high crime of treason -- teaching Hebrew.

A friend of mine from the former Soviet Union recalled how visitors entering into the then communist countries would smuggle Jewish books, highest on the hit list of the KGB who were loathe to allow the spread of such inciteful texts. Many Jewish Soviet refusniks were imprisoned in Siberia and tortured for their high crime of treason -- teaching Hebrew.

Maimonides, the 12th century philosopher, doctor and sage, wrote the following to a man who wanted to study the Maimondean code of Law, but couldn't due to his inability to understand the Hebrew. "First of all I must tell you that you are not justified in regarding yourself as an 'am-ha-aretz' (ignoramus). You are our beloved pupil; so is everybody who is desirous of studying even one verse or a single point in Jewish law. It makes also no difference whether you study in the Holy language, or in Arabic or Aramaic; it matters only whether it is done with understanding." His reply conveys the belief that all are welcome to encounter and engage the Jewish texts.

Out of a basic respect for Jewish studies Jewish Unity Live was born, a major Jewish international celebration dedicated to the reclamation of our beloved Jewish texts. The events will launch a movement that seeks to bolster Jewish unity through a return to the basics, an invitation to all Jews to take a close look at the rich storehouse of Jewish wisdom.

The concept is based on the Siyum HaShas celebration planned for March 1, 2005 around the world. That will culminate the 7 ½ year cycle of Daf Yomi, the daily study of a folio of Talmud, instituted in 1924 by Polish Parliament member and Orthodox Rabbi Meir Shapira who envisioned it as being a powerful uniting factor to have Jews around the world study the same text on a daily basis. In preparation for Jewish Unity Live, planners are urging people to take on a personal study commitment and celebrate its completion along with hundreds of thousands of other Jews rejoicing in the culmination of their studies.

In today's information age with knowledge streaming by at unfathomable speeds, we as Jews have an opportunity to delve into our past. Jewish learning can be as diverse as the Jewish people; ranging from mastery of the Aleph Bet to Talmudic discourse, to acquainting oneself with Jewish philosophy or history.

It has been all too easy to get caught up in our differences and allow the rifts between Jews to grow deeper and deeper. It is time for Jewish people everywhere to allow their intellectual curiosity to lead them to the ancient Jewish words and plunge headfirst into a dialogue that echoes with the wise voices of our people's great teachers.

As my father taught me, wisdom abounds in the world of books, and as an adult I have become something of book fiend myself. As Jews we continue to be prolific writers and readers, but sadly the number of Jews reading Jewish books continues to plummet.

Now, more than ever, as opportunities to tap into this spiritual information data base keep cropping up, it is time for Jews to begin reading, studying and understanding Jewish texts. The amazing breadth and grand scope of Jewish learning allows for each of us to find his personal connection to his roots. The beauty of Jewish learning is that there is no prerequisite, no need for ideological debate, or sectarian labeling. All that is needed is an inquisitive mind and a desire to find what being Jewish is all about.

Click here to find out more about Jewish Unity Live.

The Michigan Rally: A Report

The Rescuer
For Every Individual, A Torah Scroll
Allegiance To The Monarch
Meet the Real You: Yom Kippur
Comments
MOST POPULAR IN Israel
Our privacy policy
Aish.com Is Looking for Great Writers