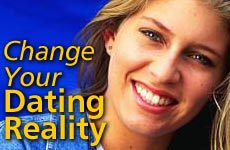 If you genuinely believe you'll get married, spiritual forces can change to bring it about.

I want to share with you the key to finding the Right One and getting married the quickest way possible -- guaranteed.

It's not hard, doesn't cost any money, and takes only about one minute a day. You already have all the tools you need to make it happen, you just need to apply this for one minute every day.

What will guarantee that you find the Right One and get married the quickest way possible? A key ingredient is to believe in yourself, and I am going to show you why it works, and how to do it the right way.

The word "manifest" means to turn a thought into a thing. Everything you see around you -- cars, houses, the table, a pen -- were all once thoughts that someone turned into a real object. When you manifest something, you make it appear in the real world. Now as a single person, you have an idea that you want to get married, and what you want to do is manifest that idea into reality, to be standing under the marriage canopy.

Through sheer will and determination, people can beat insurmountable odds.

A key underlying force that allows you to manifest an idea into reality is to believe you can do it. We can all relate to times where the situation looked bad, but through sheer will and determination people beat insurmountable odds.

Consider a life-and-death scenario of being out in the wilderness alone. Gordon Smith, an instructor who spent 26 years in the U.S. Army's Special Forces, says: "If you have a guy with all the survival training in the world who has a negative attitude, and a guy who doesn't have a clue but has a positive attitude, I guarantee you that the one with the positive attitude is coming out of the woods alive. Simple as that."
http://www.fastcompany.com/magazine/69/fighttosurvive.html

This heightened motivation of people in dire situations appears to be the force that gets them through. But that's not the whole story. The amazing thing is what happens behind the scenes, the real secret to success. There is a stronger metaphysical component at work here.

Remember the Six Day War and the Yom Kippur War? The tiny State of Israel was surrounded by hostile Arab countries numbering over 200 million people. What happened? The Arab countries should have wiped Israel off the map in short order. Instead, Israel beat them all. Miracle!

We call it a miracle when we see a dramatic change in reality. In those wars we see an obvious change of reality -- how God changed a pending defeat into complete victory.

On a smaller scale, you can use the same principle to guarantee that you will get married quickly. Let's explain:

When you believe in something, the sheer force of your will can give God reason to support your goal. Based on your belief, God actually changes reality to make the thing that you want come about. For example: You want to get married, and if you believe with total conviction that you will find the Right One, then God can take your will and actually change reality to cause your soul mate to come to you.

Let's look at the source of this idea, a story in the Talmud (Taanit 8a) about "The Weasel and the Pit." In the story, a young man promised to marry a certain woman. She asked: "Who will be the witness to this pledge?" The only things in the area at the time were a pit, and a weasel walking by. With no other option and in all sincerity, the young man said that the weasel and the pit should be the witnesses.

Time went by, and the young man forgot his pledge. Then he began experiencing serious hardships -- each time involving a weasel or a pit. In the end, he realized why these things were happening, and resolved to keep his pledge. He married the woman, and the misfortunes stopped.

If you really believe in something, God may change reality so that it comes about.

Rabbi Chaim Shmulevitz gives insight on how this works. Obviously, the weasel and the pit have extremely limited powers. Yet when the young man initially designated them to be his witnesses, God took his sincerity into account and actually changed the reality to give the weasel and the pit the ability to uphold the promise.

The same principle is true for you. If you really believe in something, God may change reality so that it comes about.

However, this powerful idea is a double-edged sword. Just as it can work to your benefit, it can be to your detriment by bringing about something that is bad for you. Let's say you meet a really great person on a date, and decide that you absolutely, positively must marry this person.

In reality, though, you may be temporarily infatuated with this person, and in fact they are really bad for you -- and marrying them will be a disaster. Yet if you will it hard enough, and are over-insistent, it is possible that God will allow you to marry that wrong person.

That's why, when you are dating, you should always ask God to help you marry the "right person" and not any specific person.

To summarize, there are two ways you can use this principle positively:

If you truly believe that you will find the Right One and get married, then God can change the reality to make it happen.

2) Ask God to bring you the Right One.

On a practical level, you need to make your belief real, by manifesting this idea -- everyday, once a day, for one minute.

Here's how to do it:

1) Say out loud: "I am ready to get married now. I am ready to meet him/her today. I am committed to being a giver in the relationship, rather than a taker."

2) Make one small effort to find them: Check for the newest members on a dating website. Call a matchmaker. Signup for a SpeedDating event. Call a friend and tell them what you are looking for.

Small, consistent steps is the key to success. "By the inch it's a cinch, by the yard it's hard." Meaning, if you take one small action every day, your small efforts turn out to be significant over time. You don't need to work hard, just be consistent.

The more consistent you are, the more you reinforce your belief. By saying positive statements and making small efforts, you send a bigger message to God, who can make it happen.

One of my mom's favorite sayings is, "Think big, be big." And it is very true.

David LeVine is the Production Manager for Aish.com. He also is the creator of Get The Ring, Keep The Ring, Uncle Bobs Tips, and Stitch n Save.

How Not to Bore Your Date

4 Things Holding You Back from a Lasting Healthy Relationship

He's the One
Were Adam and Eve Jewish?
How I Learned to Love the Multiverse
10 Big Jewish Inventions
Comments