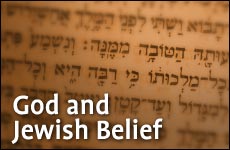 God is both the Force of creation, and the Director of history.

The foundation of Judaism and the basis of all true religion is the realization that existence is purposeful, and that man has a purpose in life.

Both man and nature have meaning because they were created by a purposeful Being. It is this Being that we call God.

If there were no Creator, then the universe would be purposeless, human existence pointless, and life devoid of meaning and hope.

The existence of a purposeful Creator is indicated by the fact that the inorganic universe contains every ingredient needed to make organic life possible. The world exists as an arena for life, and the probability that this is entirely due to chance is infinitesimally small.

God's handiwork is discernable from the very fact that human flesh can exist.

In recognition of this, the Psalmist said, “I will give thanks to God, for I am awesomely and wonderfully made” (Psalms 139:14). It is also written, “From my flesh, I will see God” (Job 19:26). That is, God's handiwork is discernable from the very fact that human flesh can exist.

It is likewise taught that even inanimate things praise God. Their very existence is a hymn, demonstrating God's handiwork. It is thus written, “The heavens declare God's glory, the firmament tells of His handiwork” (Psalms 19:2).

It is as unthinkable to conceive of the universe as arising by chance without a purposeful Creator, as it is to conceive of a beautiful poem written with a random splash of ink.

The first of the Ten Commandments reads, “I am God your Lord, who brought you up out of the land of Egypt, from the house of slavery” (Exodus 20:2). This is a positive commandment to believe in God. This commandment depends on thought and can be fulfilled at any time.

From it's wording, it is evident that this commandment includes an injunction to believe in God both as the God of creation, and as the God of history.

Judaism therefore rejects the deistic concept that God created the universe, and then abandoned it with neither ruler, guide nor judge.

The existence of God as the ethical Power and motivating Force behind the universe is indicated by the experience of men and nations that only the good is stable, while evil tends to destroy itself. It is thus written, “There are many thoughts in man's heart, but it is God's counsel that shall endure” (Proverbs 19:21).

The second of the Ten Commandments reads, “You shall have no other gods before Me” (Exodus 20:3). This is a negative commandment not to believe in any deity other than the one true God, Creator of the universe. This commandment also depends on thought and can be observed at all times.

This commandment forbids us to accept any being, entity or object as a deity and call it a god. This is true even if one still believes in the one true God.

This commandment also forbids us to accept any being, entity or object as a mediator between God and man. This is also considered idolatry.

It is for this reason that Judaism utterly rejected the Christian concept of a mediator between God and man.

A non-Jew may accept another being as a deity, but may not worship it as an idol.

Most authorities extend this prohibition to Jew and non-Jew alike. Others, however, maintain that a non-Jew may accept another being as a deity or mediator, as long as he does not actually worship it as an idol, and also believes in God. They base this on the verse, “Lest… you be drawn astray and worship them, the ones God you Lord has allotted to all the gentiles…” (Deut. 4:19). According to the second opinion, Christianity may be a permissible religion for non-Jews, and it may be in fulfillment of God's ultimate purpose.

Of all the Ten Commandments, only these first two are written in the first person. According to tradition, only these two commandments were given to us directly by God, while all the others were transmitted by Him through Moses. Regarding this, it is written, “God has spoken once, two of which I heard” (Psalms 62:12).

If a person denies the existence of God, or accepts any other being as a deity, he is denying the very essence of Judaism, and it totally rejected by God. This is the only case in which one can be punished for mere thought.

One should therefore constantly be aware of God's presence, and the psalmist thus said, “I have set God before me at all times” (Psalms 16:8).

We are similarly enjoined not to forget the revelation at Sinai where the Ten Commandments were given. It is thus written, “Take the utmost care, and watch yourselves scrupulously, so that you not forget the things that you saw with your own eyes, that they not fade from your mind as long as you live. Make them known to your children, and to your children's children: The day that you stood before God at Horeb…” (Deut. 4:9-10). This is stated in the most emphatic terms, and it is counted by some authorities as a negative commandment.

From "The Handbook of Jewish Thought" (Vol. 1), Maznaim Publishing. Reprinted with permission.

If You Were God
Chukat 5782: Let’s Play the Blame Game!
The Sin of Moses: The Two Ways to Communicate
In Aftermath of Chicago’s July 4th Shooting, Local Moms Provide Countless Points of Light
Comments
MOST POPULAR IN Philosophy
Our privacy policy