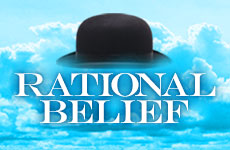 Should acceptance of the Torah be based more on evidence, or more on faith? The answer: It depends.

Judaism has two seemingly contradictory sources dealing with a fundamental question of Shavuot. Should our acceptance of Torah be based on a blind faith ― or on a rational intellectual basis?

Are you to accept [Jewish ideals] on the authority of those (rabbis) learned in Torah and tradition ― and exclusively rely on their traditions?

On the contrary! The Torah expressly bids you to reflect and exercise your intellect on such themes. After you have attained knowledge by the method of tradition, which covers all the precepts of law, you should investigate with your reason, understanding, and judgement until the truth becomes clear to you and false ideas are dispelled; as it is written, "Know this day and lay it on your heart, that the Lord, He is God" (Deut. 4:39). This admonition refers to everything in which rational methods of investigation can be used.

When God was ready to give the Torah, He first went to all the nations of the world and offered it to them. One after another, the nations all asked, "What's written in the Torah?"

Finally God went and offered the Torah to the Jewish people. They accepted it sight-unseen, as the Torah says (Exodus 24:7): "We will first do the Torah, and then we will understand it."

There are essentially two questions which these sources raise:

Question #2 ― How could the first source state so clearly that acceptance of Judaism is dependent on an intellectual process? Doesn't this directly contradict the verse in the Torah which says "we will do and then we will understand?"

The answer is that both sources are valid, but they are referring to two different situations.

When a person goes to a trusted family doctor, he will not question the recommended treatment. Similarly, by the time the Jewish people were standing at Mount Sinai, they already had an ongoing, trusting relationship with God. They had personally witnessed the Ten Plagues in Egypt, the splitting of the Red Sea, and the Manna miraculously falling from heaven. They knew clearly that God runs the world and that He wants only our good. Therefore, when He offered the Jews a guidebook for all of life, there was no doubt that they wanted it ― whatever it may contain.

Actually, the order of "we will do, and then we will understand" is the only logical way the Jewish people could have accepted Torah. If they would have said, "Let us read the Torah first, and then we will decide whether or not we want to accept it," that in and of itself would have been a rejection of the Torah! They would have in effect been saying, "We are only interested in accepting a system of moral guidelines from God if it is convenient and comfortable for us."

The Role of Rational Acceptance

Given this explanation, how are we to understand the emphasis on rational acceptance of the Torah which the first source ("Duties of the Heart") expresses?

The key is to understand which period of Jewish history we are speaking about. For the generation of Moses, which had an intimate personal awareness of God's power and His love for the Jewish people, it was obvious that they should accept the Torah sight-unseen.

"Duties of the Heart," however, is addressed to all future generations. How are we ― who lack those fundamental formative experiences of the original generation ― expected to relate to the Torah?

The answer is with our minds. We must think, investigate, and clarify to determine our relationship with the Torah.

Given the multitude of possible religions and "paths to God" clamoring for our attention (combined with the human tendency to settle for half-truths, and comfortable compromises to tough questions), we are instructed to rely primarily on our minds for our inquiry into the truth of Torah.

However, as important as intellectual knowledge may be initially ― "Know therefore this day," it must be joined by emotional realization ― "and consider it in your heart."

A complete relationship with God needs both intellect and emotion. "Knowledge of God without feeling" leaves a person disconnected and out of touch with his convictions. "Feeling without knowledge," on the other hand, is the basis for every cult, nationalistic ideology, and charismatic movement in history.

That's why both components together ― intellect and emotion ― are essential to every search for truth and relationship with God.

This Shavuot, let us therefore commit to using our intellect to probe, investigate, inquire and research the depths of God and His Torah, so that we may reach the level of a complete, wholehearted "doing and understanding."

When the Holidays Are Over

Why Are There Commandments?

What is the Oral Torah?