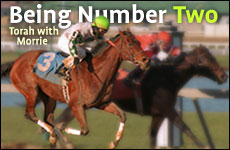 The pitfalls of trying to always be Number One.

"It is 1979, a basketball game in the Brandeis gym. The team is doing well, and the student section begins a chant, 'We're number one! We're number one!' Morrie is sitting nearby. He is puzzled by the cheer. At one point, in the midst of 'We're number one!', he rises and yells, 'What's wrong with being number two?' The students look at him. They stop chanting. He sits down, smiling and triumphant." (Tuesdays with Morrie)

When we think about it honestly, trying to be 'number one' in a competition is not so healthy for one's character. If I can only succeed by putting you down, doesn't that make me wish for you to fail, more than drive me to succeed?

You have to wonder about professional sports leagues. Every team begins the season thinking and hoping that they will win the championship. Yet everyone knows that only one team will be smiling at the end of the season. Every other team will look back at the season as having been a failure. Why? Because we have created a society which preaches that if you are not the best, then you are not worth much.

No one really believes the old sports saying, "It's not whether you win or lose, it's how you play the game."

The other oft-quoted saying is everyone's real philosophy, "Winning isn't everything; it's the only thing."

We live in an environment that motivates through rivalry. And this is a tragedy. As E.R. Holman said, "The desire to win must be wedded to an ideal, an ethical way of life. It must never become so strong that it dwarfs every other aspect of the game of life." Even our schools have student-comparison charts on the bulletin board and Bees to determine who knows the material best. The focus has shifted from 'who knows things well' to 'who knows things best.'

The Torah has a term for this that is not very complimentary, 'mitkabed bekalon chaveiro,' gaining respect through another's disgrace. Such conduct, done continuously throughout one's life, carries serious consequences (Rambam, Laws of Repentance 3:14).

If all I have to do to be successful is to beat you, it's a whole lot easier to cause you to do worse than me, rather than to get myself to do better than you. The result: students will not push themselves to truly reach their personal maximum if all they have to do to flourish is defeat someone else.

Does it really make sense to reward the brightest students more for easily winning than the slower ones who are doing their best?

And what happens to the weaker students who know that they cannot actually win the competition? What is their drive to do their best? Does it really make sense to reward the brightest students more for easily winning than the slower ones who are doing their best?

It is true that "The envy of scholars increases wisdom" (Baba Batra 21a) but this does not mean we should compete with someone else. We are supposed to observe the accomplishments of those around us, learning from them in motivating ourselves to excel as best as we can. We don't rival others; we learn from their example.

If I see that my friend completed the entire Talmud by studying a page a day (Daf Yomi) I should take note and see where I can apply the same diligence in my life. I don't look to compete with him. It may actually be unrealistic for me to copy what he did. But I certainly can become inspired and, as a result, enhance my personal Torah study habits.

Watch kids when they play sports. Do they play for exercise and for the development of their skills, or do they play in order to win? Have you seen the way otherwise pure, good-natured kids, will transform into screaming tigers on the baseball field?

"He was safe!" "No way, he was out!" When the kids choose up sides, do they try to even out the teams so they will have a good competition, or do they seek to get the best players in order to win the contest? Are they not humiliating their friend in public when they avoid picking the 'loser' players? How does the last kid picked feel when nobody wants him?

Yes, we should be competitive, but only with ourselves. If I ran the track in 10 minutes last week, let me try to run it in 9 minutes today. If I got a 90 on the last test, let me attempt to get a 95 this time. Winning does not have to mean defeating someone else. It can be accomplished by struggling against ourselves, trying to improve upon our personal past performance.

We don't have to be Number One. We can be Number Two or even Seventy-three, as long as we are striving to attain personal greatness.

In God's book, the utmost Torah scholar and holy man, and the simplest Jew can be equal.

"Every person is fit to be as righteous as Moses, our Teacher."
(Rambam, Laws of Repentance 5:2)

God doesn't expect everyone to perform superhuman feats, as Moses did. We won't ever reach the heights of prophecy Moses reached and speak to God face to face, but if we live our lives properly and according to the ways of G-d, and we maximize our personal abilities and potentials, we can be as righteous as Moses.

Through Torah study, performing acts of kindness, and observing the Torah's commandments properly, according to our God-given abilities, we are being as righteous as Moses

We should try to internalize the statement of our Sages, "Everyone is obligated to ask himself, 'When will my actions reach those of my forefathers, Abraham, Isaac, and Jacob?" (Midrash Eliyahu Rabba, ch. 25)

One of the most famous explanations of this statement is that although we really shouldn't fool ourselves into thinking we can become as holy and great as the Patriarchs and Matriarchs, we must attempt to go that far if we are to accomplish anything at all. As the expression goes, "Shoot for the moon. At the very least, you'll end up among the stars!"

This is a vital lesson as we approach the New Year. God judges us on Rosh Hashana based upon what He expects from us, not whether we are Number One. Each one of us is viewed by God as an entire world and He determines whether this world is accomplishing its purpose.

"The root of all service of God is to comprehend and internalize what his (each person's) obligation is in his world" (Ramchal, Path of the Just).

Maybe we're better than all the rest. But have we done all that we could have done to reach our individual potential?

May God grant us life and prosperity in both the spiritual and physical realms and may He guide us to become all that we can be.

Forgiveness after the Pittsburgh Massacre

Torah with Morrie #2: Living with Youthful Passion
The Promise Of The Land
Which Chat Are You On?: Parshas Behar/Lag Ba’Omer
Do You Like Slow-Cooked Food? Thank the Jews
Comments
MOST POPULAR IN Ideas
Our privacy policy