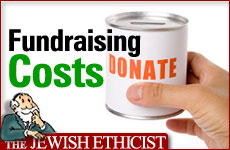 Donors should be informed of exceptional fundraising costs.

Q. We have a small, little-known organization. In order to reach donors for our very worthy cause, we would need to hire a well-connected fundraiser who demands 50% of the donations he solicits. May we hire this person?

A. Certainly there is no inherent ethical problem with having a paid fundraiser. Encouraging people to give money to charity is considered a great mitzvah; indeed, the Talmud tells us "One who induces others to do is greater than one who does himself". (1) People who engage in this calling have to eat, just like everyone else does, so it is evident that they deserve a salary. Jewish tradition affirms the legitimacy and even the desirability of giving people involved in public service respectable pay. Indeed, the Shulchan Arukh (authoritative Code of Jewish Law) states: "It is better to have a hired prayer leader than a volunteer". (2) The commentators give various reasons, including the fact that it gives the prayer leader more inducement to do a careful job, and that it will keep unqualified individuals from pressuring their way into the role. Giving a salary to community charity collectors was an accepted practice (3).

At the same time, our tradition is familiar with the danger of excessive pay. The Scriptures tell us that the sons of the prophet Samuel "did not go in his way" (I Samuel 8:3); the Talmud suggests that they exploited their office in order to give excessive salaries to public functionaries. (4)

So when a fundraiser approaches a donor for a donation, the donor has every reason to be aware that the fundraiser is a paid employee and that some of the organization's budget goes to pay his salary. However, by the same token he has every reason to believe that if a fundraiser asks for money to support the work of a charity, then in fact the majority of the money given will actually be devoted directly to this purpose.

Where do we draw the line? Based on statistics I have seen, reputable organizations typically spend about 20% on fundraising, though a significant minority spend as much as 50%. It's hard to draw a hard and fast line, but in my opinion if fund raising takes up more than 30% of the budget donors should be informed.

I can't think of any cogent objection to this rule. If the organization claims that there is no need to disclose because, say, 40% is a perfectly reasonable amount, then by the very same token they have nothing to fear by disclosing this. If by contrast they say it is not fair to make them disclose this because it will deter donors, then they are basically admitting that donors don't know where their money is going and are effectively being misled, actively or passively, as to the true use of their donations.

If your fundraising costs are unusually high for a good reason, then by all means explain the reason to donors. If donors are poorly informed about the costs, then educate them; for instance, you could show them that many reputable organizations have high fund-raising costs. The professional you hire can tell the donors very frankly: I'm getting 50% of funds collected, because I'm making initial contact with donors, or because my expenses are very high, etc.

I find that many prominent charities have insufficient respect and regard for donors. Donors are too often viewed as fair game for pressure tactics or misleading stories; their contact information is bought and sold without their knowledge, etc. In the end it is the charity recipients who suffer. One essential component of a relationship of mutual trust with donors is adequate transparency regarding the use of funds, including any percentage agreements with fund raisers.