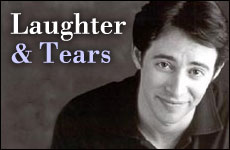 A stand up comedian grapples with laughter during trying times.

There's nothing funny about the 9th day of the Jewish month of Av – the quintessential Jewish day of mourning that marks all tragedies that have befallen the Jewish people in our long history. But what would you do if you were an observant Jewish comedian and Comedy Central offered you a chance to perform on their popular comedy showcase "Premium Blend," that just happened to be taking place on Tisha B'av?

That's exactly what happened to Los Angeles based comedian Avi Liberman. "My agent called me. He said, you can either do Thursday night or Friday night," explained Liberman who was born in Israel and grew up in Texas. "I don't drive on Shabbos, so I didn't want to do Friday night. But Thursday happened to be Tisha B'av. Now, I know that Tisha B'av being the day of Jewish mourning -- it was a little weird to be doing a comedy show, but that's my job -- I'm a comedian. So I took it."

As the ramifications of Liberman's decision began to set in, he realized that doing his act in front of millions of television viewers while being hungry, thirsty, and cranky after a long day of fasting and praying probably wouldn't bode well for his comic timing. "I am not a bad faster so I wasn't concerned about fainting on stage or anything like that," related Liberman, "but I was really worried about my throat being dry and just not being able to perform. I checked with my Rabbi to see if I could at least gargle with liquid to keep my throat from getting too parched. He said, ‘I already gave you the most lenient time possible to end the fast, but I can't work miracles.' We had a good laugh about it."

The day of his performance arrived and despite the high pressure situation, Liberman remained committed to his religious convictions. The Premium Blend special was being hosted by well known Comedian D.L. Hughley (The Hughleys, The Original Kings of Comedy) and to what Liberman attributes to a "Divine stroke of luck," Hughley continued to slip-up when introducing the comics, necessitating a number of re-shoots. "I was slated to go 4th," Liberman recounted excitedly. "I couldn't stop thinking about my dry throat. As time went on, and as DL Hughley kept making even more mistakes, I realized that the fast was coming to an end. Sundown came, I quickly had something to eat and drink, and then they called me onstage – it was perfect timing. Like God himself didn't want to miss the show."

"It was perfect timing. Like God himself didn't want to miss the show."

It is not a stretch to suggest that God may very well be interested in Liberman's career as he has used the medium of comedy itself to demonstrate his commitment to the Jewish people. In 2003, he organized a tour of Israel by American comedians called "Stand Up and Laugh, The Best of America's Young Comedians." It featured Liberman and three other comedians: Los Angeles' Wayne Federman and Gary Gulman and New York's Dan Naderman, who all have appeared on "The Tonight Show With Jay Leno" and "The Late Show With David Letterman" with Naderman and Gulman also appearing on NBC's "Last Comic Standing."

The idea for the tour came when Liberman visited the Jewish state in 2002 and decided that he wanted to make his own contribution. At the time, it was the height of the Intifada, and he figured that what Israelis could use most was probably just a good laugh. Simultaneously, he located a Jerusalem area center for homeless and drug addicted teens called "Cross-Roads," that ticket proceeds would be donated to, if he could find some other American comedians to join him on his tour.

At first, he had some recruiting difficulties due to the violence. "I would call up someone and ask if they were interested in doing a few shows in Israel, and they would tease me and say things like, ‘I can't do it Avi, I'm doing a week at the Baghdad Funny Bone," laughs Liberman.

But after some light cajoling, he was able to convince his friends Federman, Gulman and Naderman to join. The shows were a resounding success – not just for those who attended, but for the comedians themselves who all thoroughly enjoyed their time in Israel.

During his act, Liberman remarked about an experience he had with Israelis saying, "I don't know if you go to shul normally in your life, but when you're on El Al, you're going. ‘There's a plane full of Jews, but we specifically need you.' The amazing thing is, I was still late..."

"I don't know if you go to shul normally in your life but when you're on El Al, you're going"

The audiences enjoyed themselves as well, not just because it was a night out on the town -- but in a more profound way. For some, the humor was almost therapeutic. One woman approached Liberman after the show and confided, "I just wanted to thank you. I haven't had anything to laugh about in over a year."

Perhaps therein lies the success of Liberman's tour, and the deeper, perhaps even more mystical connection between comedy and the Jewish people. Jews have no doubt suffered countless tragedies throughout our existence. At the same time, we are noted for our senses of humor. Are we gluttons for punishment or, perhaps, is there a correlation between the two?

Laughing through difficult times is one of the things that the Jewish people do best and it may very well be one of our attributes that has enabled us to survive. On cue, almost with a sense of Jewish comedic timing that God Himself may not have wanted to miss, Avi Liberman has helped people laugh through the horrors of terrorism and on Tisha B'av itself.

Unfortunately, the Jewish world continues to experience difficult days, just as we have throughout our existence. And just as we have done in the past, we have shown the ability to overcome our tears with laughter. In fact, we have nearly put a new spin on the ancient Biblical verse which states, "To everything there is a season... a time to cry and a time to laugh." For the Jewish people, that time has often been one and the same.

Yiddishe Mammas
It Takes A Lot Of Faith To Be An Atheist
How Instagram Brought Back This Nostalgic Soup
What Makes Eli Run?
Comments
MOST POPULAR IN Jewlarious
Our privacy policy