From Lebanon, with Love 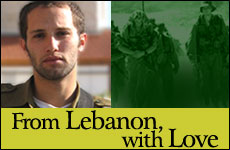 As a mother of a soldier in the Israel Defense Forces, I pride myself on being pretty calm. But all that changed this past summer.

As a mother of a soldier in the Israel Defense Forces, I pride myself on being pretty calm. While I can't compete with my extremely laid-back husband, I don't lose any sleep over my olive green-clad son. Chananya, my first-born, has been stationed in Gaza, Ramallah, Kalkilya -- not particularly friendly places, to say the least -- and while I may worry a bit, I figure that the chances of anything happening to him are very small.

But I was ready to throw all that calm to the winds this past summer. Hezbollah terrorists, based in southern Lebanon, crossed into Israel and kidnapped two reserve soldiers. Israel retaliated by bombing Lebanon. Hezbollah started raining down missiles on northern Israel. We were at war.

Chananya was on the Golan Heights. I immediately called him.

"Don't worry, Imma, " he assured me. "Our unit isn't going into Lebanon. We're staying here to guard the Syrian border. It's so safe we're patrolling in open jeeps. It's totally boring."

"Good!" I exclaimed. "You should be bored stiff for the whole war!"

"Good!" I exclaimed. "You should be bored stiff for the whole war!" He laughed. I didn't. I said I loved him, he said he loved me, and we hung up. Thank God, I thought as the tension left me. I'll still be able to sleep. 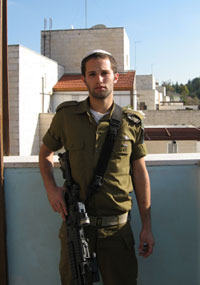 The war progressed. I listened to the radio often, and called Chananya frequently to make sure he was still on the Golan and everything was quiet. His cellular phone was off a lot -- much more than usual -- but whenever I managed to get him, he told me with a yawn that he was still there and nothing was happening. Israel was deliberately dropping bombs close to the Syrian border to send them the message not to get involved, he informed me, and while Syria was on high alert, we both knew they wouldn't attack Israel. His unit was still hanging out. It was still boring.

Meanwhile, despite Israel's heavy bombing of terrorist targets in southern Lebanon, Hezbollah's missiles kept falling. After a couple of weeks, the news reported that we had begun a ground invasion. My stomach tightened, because I knew that meant casualties. Young men, my son's age, would be killed. But my son, safely positioned on the Golan Heights, wouldn't be among them.

During the entire war, Chananya came home only once, and I barely saw him. He arrived in the evening and fell into bed, as he often does. The next morning he changed into his good uniform, mumbled something about having to go down to Ashkelon for some ceremony, and quickly left. He came back late, fell into bed again, and the next morning returned to his unit. I was disappointed to see so little of him, but I figured that in wartime, he was needed on the Golan, boring or not.

The war finally ended with a ceasefire. Over 50 soldiers had lost their lives. My heart broke for the bereaved families, who had surely suffered considerable fear only to have their worst nightmare come true.

A short while later, my friend Batya and I treated ourselves to a day at the separate beach at Rishon LeTzion. The ocean is one of my favorite places. Floating far out with the sea all around me and the blue sky above, I feel overwhelmed by God's love for me.

Sitting on the beach afterwards, I sighed. "Batya, my life is so good. I have a home in Jerusalem, a wonderful husband, seven precious children, rewarding work, trips to the ocean... The problem is, I know I don't deserve all I've been given. What's more, I know I'm not growing as much as I would if I had to contend with difficulty or pain. And that's scary. I feel that sooner or later, something's going to have to happen and I'm just waiting for the axe to fall."

Batya looked thoughtful. I could see she was choosing her words carefully. "What would it take to feel that the axe had fallen?"

I shuddered. "I don't want to think about it. Getting a terrible disease. Worse, something happening to my husband. Or one of the kids."

"And in what ways do you think that would inspire you to grow?"

"I guess I'd work on myself harder. Pray better. Give my family more love. I don't know."

A couple of weeks later, I noticed something unusual in the mail. It was from the army. I opened it. Inside was a letter addressed to all the parents of my son's unit. I read it -- and froze.

The letter was thanking us for supporting our brave sons who had fought so courageously in Lebanon.

Chananya had been in Lebanon.

I confronted my husband. It turned out he had known all along, but recognizing the limits of my calm, he told Chananya not to tell me. I wasn't angry -- I knew the decision to spare me from worrying came only from love. Meanwhile, basically the rest of the world -- including Batya, and Chananya's next three younger siblings -- knew. Only I was allowed to continue naively believing that my son was sitting bored on the Golan.

Shortly afterwards, Chananya came home on leave. I waited for a good time and quietly told him I knew where he'd spent half his summer. He didn't look surprised -- it was just a matter of time before I found out. I asked him what he'd been doing in Lebanon. He told me, matter-of-factly, that he was shooting, being shot at, and blowing up terrorists' bunkers.

Then I asked him what ceremony he had attended the day he was home. He told me it was a funeral for a soldier in his unit.

It's very disturbing to have your past reality change so dramatically. But once I recovered, I thought deep and hard.

My son had been in Lebanon. Had I known, I would have prayed with more intensity than ever. I would have taken upon myself some huge mitzvah as a merit for him. I would have done just about anything in the hope of ensuring his safe return.

Could gratitude motivate me as much as fear?

Well, he did come home safely. Did I not now owe God just as much as if I'd suffered that worry and tension? And even more, for the incredible blessing of having been spared it?

Could gratitude motivate me as much as fear?

Jews are commanded constantly both to love and to fear God. Fear is a lower level of relationship, and it comes more easily to most of us. On the eve of the 1991 Gulf War, when Saddam Hussein was threatening to destroy Israel with chemical weapons, there was a lot of fervent praying and repentance. Fear is a great motivator.

Love is tougher to muster up, because as long as things are going well, we take most of our blessings for granted. When the Gulf War ended on Purim, the 39 conventional missiles that had fallen on Israel had left only one fatality. It was clearly miraculous, and for a short time everyone felt it and was thankful. But that quickly dissipated, and within no time at all, life was unfortunately back to normal.

I felt that God was now testing me, saying: You're good at fearing Me, but look what I've given you: I saved your son from danger that you didn't even know he was in. Can you now love Me as much -- and keep loving Me?

I'll be honest: I tried, but not hard enough. I slipped back into complacency. So a month later, God sent me a different kind of wake-up call. While hiking in a wadi, I dislocated and broke my wrist. This time I think I responded better. Despite the pain and the prospect of slow healing, I made two long lists of all my reasons to be grateful.

First I listed the many blessings accompanying the accident. My ever calm husband was there; my wrist and not my ankle was injured, so I could climb out; it was my left wrist and not my dominant right; I had fast emergency room care and a nice doctor; it was after beach season(!), and more.

Then I listed all the spiritual benefits that resulted. To name a few: My irreligious sense of invincibility was destroyed; I acquired greater empathy for my handicapped mother; and I was forced to develop patience and trust in God for the long months ahead.

Most importantly, my accident drove home the lesson I hadn't fully learned from Lebanon: that I should deeply appreciate everything I've been given, never take it for granted, and constantly love God for it.

Simple and obvious truths, it seems, are those we often have the most difficulty internalizing. Thankfully, God always gives us the opportunity to try again.

From Mother to Son
The Promise Of The Land
Which Chat Are You On?: Parshas Behar/Lag Ba’Omer
Do You Like Slow-Cooked Food? Thank the Jews
Comments