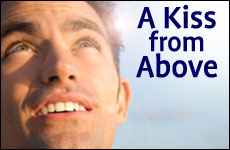 Don't wait for a near miss with a bus to realize that God is guiding your every step.

I'll never forget the day I was almost run over by a bus. I was in Jerusalem, trying to squeeze too many errands into too little time. Rushing to get to some store before it closed, I reached a small side street off a major intersection. I looked both ways and stepped into the street.

Then I heard the roar of engines. A bus had suddenly pulled around a bend in the street and was rocketing towards me. For a moment I froze. I was in the middle of the street and this red and white monster was bearing down on me, a ton of metal that could crush me in a moment. Should I run to the other side? Race back to where I stepped off the curb? I was paralyzed with fear. Then my brain leapt into action. I quickly backed up to the street behind me. The bus whizzed by inches from my body, and I slumped against a nearby wall.

Several people were nearly as shaken as I was. One elderly woman just kept looking me and shaking her head in relief. Another roundly denounced the profound irresponsibility of the bus driver. One man turned to me and said "You just experienced a miracle," before he disappeared in the crowd. I took a few deep breaths and then crossed the street and walked to the store.

What if I hadn't gotten to the curb on time? How would they have told my husband? My parents?

But the images kept intruding. What if I hadn't gotten to the curb on time? Would I have survived? Would I have been crippled for life? How would they have told my husband? My parents? What of my children -- I may never have seen them grow up; they may have had to face a motherless life. Each thought was more horrific than the one preceding it.

For the next week or so I felt an overwhelming gratitude towards God. I had been given the greatest gift of all -- life, and I wanted to use it properly. I had been spared. There was a palpable sense of closeness to my Creator. He had plucked me from danger and left me unscathed.

Two days ago, for no particular reason, I found myself reminiscing about two of my favorite novels as a child. I'd read each one numerous times, and felt intimately connected to the characters. Now, as I thought about those books, I reflected on how much I'd love to be able to share my childhood favorites with my own children. How I'd love to see them enjoy the same books I had loved. But I realized that there was a good chance that they were no longer in print, and had long disappeared from the bookstores. I made a mental note to begin searching for them online as soon as I'd have a chance. And then my mind moved on to other matters.

The next night I was up late cooking for the Sukkot holiday. At midnight my cell phone rang. It was my husband. He had gone to buy a lulav and esrog and had been successful in his search. Now he was about to head to home. But he had noticed that a neighbor of the esrog seller was having a book sale. There were dozens of book piled on a table outside their apartment.

"I spotted that book you've mentioned so many times," he said. "And I remembered how you loved it. Should I get it?"

"Sure," I responded jubilantly. "And maybe she has the other one too?"

"Yeah, right," my husband responded with a laugh. He then patiently went through the piles, reading titles to me as I chose books from afar. Suddenly there was a pause.

"Bassi," he said excitedly, "You won't believe it, but I just found your second favorite book."

"Grab it," I told him, as though he was fighting mobs of shoppers at the tiny sale at this unearthly hour. He did.

God's hand was so evident. I felt cherished and loved.

A short while later, he came home bearing the loot. I was thrilled, and very grateful. What were the chances that 24 hours after I had thought of two old favorites my husband would stumble across both of them in the hallway of the apartment building of his esrog merchant? God's hand was oh so evident. Like the woman whose husband brings home a bouquet of her most prized flowers or a box of her favorite chocolates, I felt cherished and loved. I had received a kiss from above.

There was a story one of my rabbis in seminary was fond of relating. One of the great rabbis in pre-war Europe didn't want his daughters attending the State-run schools. So he decided to home school them. One of the state requirements was that the students write a short essay daily. So this rabbi instructed his daughters to write down one personal incidence of Divine providence every single day. Doing so, he explained, would sensitize them to the many small and large ways God personally cares for them. Our seminary teacher suggested we do the same, and many of us took up the challenge.

At first it was very difficult. Life in seminary was wonderfully monotonous -- great classes every day, day after day; study sessions; breakfast, lunch and supper; a jaunt to the laundromat or the pharmacy. Nothing too earth shattering. When and where were all these incidents of Divine providence supposed to happen? But once I started looking, I started seeing.

"I really needed to speak with Dina, but was having a hard time finding her, and then there she was across the table when I sat down for lunch."

"We had a speaker who said just what I needed to hear. And then I had a chance to put her words into action that same day."

During the two years or so that I kept this going, I felt perpetually connected to my Father in Heaven.

"We were on a hike and I wasn't feeling well. Just then the bus which was meant to pick us up farther along drove by and let a few girls on. I was one of them."

The fact that I knew that I'd have to write something in my little book that night kept me alert and attuned to the myriad manifestations of my Creator's love. During the two years or so that I kept this going, I felt perpetually connected to my Father in Heaven.

There are times when God shows us His providence in full force, minutes when life hangs in the balance and we are saved by Divine intervention. But to wait only for those moments to feel our Father's love is to lose out on the day-to-day steady outpouring of care. Not always will His messages come as a dramatic shake; sometimes there is a just a gentle tap on the shoulder, a subtle whisper. It is up to us to attune ourselves to hear it.

Perhaps no time is as suitable for such work as immediately following the grandeur of the High Holidays. After a month of high-voltage spirituality, after being swept through four holidays, one on the heels of the next, it's often hard to return to mundane routine. Life seems flat, and we wonder how the intense feeling of connection can dissipate so fast. Looking for the little instances of Divine providence that light up every day can nurture and sustain that connection over time.

It can be the appointment you should have missed -- save for the fact that the doctor was running late. It can be the chance comment that reminded you of the birthday you'd have otherwise forgotten. It may be immediately finding a parking space in a crowded lot. Instead of saying, "How lucky," and moving on, pause for just a moment and allow yourself to feel the kiss from above.

During the Holocaust, A Kindness Returned: A Yom Kippur Message