You Think Your Job Is Bad? 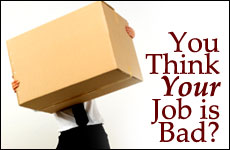 Mark Miller shares the worst jobs he's ever had. And they're bad. Very bad.

There's an old Jewish saying, or at least one that my grandparents who were Jewish would say to me: "Work as though you will live a hundred years; think as though you will die tomorrow." My experience in the working world has been closer to a slight variation of that quote -- I've had jobs for one day that felt like 100 years and have prayed for a quick death so I wouldn't have to return.

Allow me, won't you, to share the most painful, embarrassing, humiliating, soul-draining jobs I've ever had. Of course, this could dredge up a lot of residual anguish which may impact upon my psychological development. But then again, so does watching my Uncle Mort pick the pieces of brisket out of his teeth after a meal.

Of course, it's not just we commoners who've had to toil in the nitty gritty real-world employment scene. Even today's celebrities had to work to become celebrities, often by doing mundane jobs to support themselves en route to their fame. Danny DeVito worked as a hairdresser in his sister's beauty salon. Steve Martin was employed in a magic shop at Disneyland. Whoopi Goldberg applied make-up to corpses in a mortuary. Even Moses was a shepherd – well that was his day job in between smiting the Egyptians, leading the Israelites out of slavery, getting the Ten Commandments on Mount Sinai….he was apparently the world's first multi-tasker.

How fascinating it is to discover these early jobs of history's greatest names. Somehow, it makes them more human, more relatable; perhaps it's even inspirational--as if to say, "Heck, President Truman was a hat salesman, so maybe there's hope for me, too. Maybe even though today I'm just following this elephant around with a shovel and a broom, I could one day become President." Freud described this kind of thinking as "delusional."

But back to, for want of a better word, me.

Note: the following are absolutely real jobs that I have actually held. Sadly, nothing was made up or enhanced. Feel my pain. In fact, go ahead and give me a sympathetic "Oy!" Thanks; I needed that.

I started out as a towel boy in a massage parlor. That's right, a towel boy in a massage parlor. No, I'm not joking. And yes, I wish I were. Granted, not your typical job for a young Jewish man. Especially considering the fact that this was, of course, a theme massage parlor where masseuses dressed up as Egyptians. After their hands were through working their magic, I had to enter the private "pyramids," collect used towels and wash them. Can you hear my ancestors spinning in their graves? Oddly enough, I chose not to pursue a career in massage.

Can you hear my ancestors spinning in their graves?

Instead, I moved into the burgeoning field of office management, for a casket-making company. The highlight was taking grieving families into the showroom to let them select a casket. I still remember the phrases I used most often: "I'm sorry for your loss"; "I guess that one's comfortable—we've never had any complaints," and, "Yes, I do enjoy the job, but what I really want to do is embalm."

After that, I made the next logical job choice—stand-up comic at a Jewish old age home on New Year's Eve. What I remember most was various audience members, during my act, saying to one another loudly, "What did he say?!", shouting to me, "TALK LOUDER!" , and "You still have some brisket in between your teeth!" Afterwards, the home's director took me aside and confided, "We can either pay you, or get Dottie Feinberg that hip operation."

But why dwell on those lighthearted, carefree jobs, when I can share with you the one that proves that no matter how badly you think you have it, there's always someone who's sunk lower? Sunk, in this case, to being a fake perfume salesman in a parking lot. No, unfortunately, that's not a misprint.

I was trained to lurk, like a ravenous tiger stalking its prey, in the parking lots of huge outdoor malls, and wait till customers exited the stores and reached their cars. I was then to lick my paws and creep slowly and silently toward those with the weakest common sense, ready to spring.
While they fumbled for their keys—innocent, unaware and vulnerable—my mission was to pounce and, using a memorized sales pitch, attempt to sell them $27 re-creations of brand-name perfumes from the mobile stockroom of my car. If any of my victims were even slightly good at reading eyes, they surely would have seen "I hate myself for doing this" in mine.
Most of these people had an understandable response: As they saw me coming, clutching my faux perfume bottles and my most sincere insincere smile, they fearfully hurried to get their children safely into their cars, lock the doors and start the motor, desperate to escape the happy lunatic who was approaching. At least I smelled good.

As they zoomed away, I thought of my college degree and my parents' high hopes for me, and wondered if Dr. Kevorkian, that doctor who assisted suicides, would be willing to take me on as a client and if so, would his phone number be listed. If it was, I knew it wouldn't take much to persuade him to put me out of my misery. He'd most likely respond to my request, "You're selling perfume knock-offs in a mall parking lot to no one who wants them? I'll be right over."
In the six hour shift I endured, I sold just one bottle, and that to a woman whom I'm not quite sure had a completely working grasp of the English language, because she kept pointing from the perfume to her car's oil container under the hood.

My heart goes out to anyone who has to do any bad job. I suppose it's all part of the price of figuring out who you are and what you want in life. On second thought, who am I kidding? It's generally because you need cash and it's the only job you can get. Still, for every day you have to do one of those jobs, your heart and soul shrinks just a little bit. A Jewish proverb (or my grandmother again) states, "Not to have felt pain is not to have been human." If that's true, my jobs have made me the most human man alive. And that's why if one day I see you coming toward me with your own selection of perfume knock-offs, you don't even have to launch into the sales spiel; I'll just open my wallet. Help yourself. I know exactly what you're going through. And I'm truly, truly sorry.

Mark Miller has written on numerous sit-com staffs, performed stand-up comedy in nightclubs and on TV, and been a humor columnist for the Los Angeles Times Syndicate. He can be reached at mark.writer@gmail.com
Like What You Read?  Give Jews around the world the chance to experience engaging Jewish wisdom with more articles and videos on Aish. It would make your mother so proud and as a nonprofit organization it's your support that keeps us going. Thanks a ton!

Jewish Solutions to Global Warming
Don’t Believe in Other Gods Versus God is One
Seeing Without Eyes
Why Shouldn’t We Eat Whatever We Want?
Comments
MOST POPULAR IN Jewlarious
Our privacy policy
Aish.com Is Looking for Great Writers