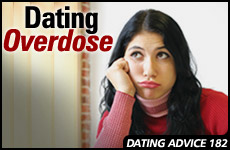 Her emotions are on short circuit. Can anything save this couple's future?

I have been dating a woman for nearly a year. We spend most of our time together, both during the week and on weekends. She is divorced with one child.

Over the past year our courtship has been progressing and I thought everything was going fine. But then a few days ago she that she "needs some space." I was shocked and asked why. She explained: "I have mixed feelings. One day I see a future with you, and the other day I feel it's too much."

But she agrees that we get along great.

So now what do I do? Should I give her time alone and hope that she comes back to me?

This women's request is one we've heard from many others who've "overdosed" on dating. Two people who are in the process of getting to know each other usually can't spend as much time together as you have. Even though they enjoy each other's company, and care for each other, they need a certain amount of personal space. (This is also true in marriage -- even happily married spouses need personal time!)

Our experience has shown that, in this regard, there are differences between the genders. Many men work out their feelings very quickly, often during the actual date itself! Most women tend to process their feelings over time. It is not uncommon for a man to come to the conclusion that this is the woman he would like to "spend the rest of his life with," while she is at a much earlier stage of the courtship.

Often, a man is so sure that this woman is right for him, that he constantly tells her so. This can make her feel overloaded, because she hasn't yet reached that point. She then may interpret this as a sign that the guy is not right for her. In many cases, this "conclusion" is wrong. She simply needs more time to allow her emotions to work themselves through, without being pressured.

Fortunately for you, the woman you are seeing hasn't decided to end things. She simply realizes that she needs more personal space.

We have found that many people, particularly women, need personal space for another reason. They have other things going on in their lives besides dating. They need to spend time with other members of her family, pay bills, take care of household chores, fulfill community obligations, touch base with friends, and unwind through a hobby or outside interest.

By spending too much time together, it can monopolize her attention to the degree that her individuality is being suppressed.

Additionally, in your case, this woman has a child that needs private, personal attention -- and her mother hasn't quite figured out how to balance all the dating with her role as a mother.

So with all the time you spend together, it should not be surprising that she feels overwhelmed by the growing pile of responsibilities that she's neglected.

[Actually, this idea applies even after marriage. Although marriage is a total bonding, a married couple must still strike a balance between their "married life" and their "individual lives" -- i.e. jobs, hobbies, friends, families. This a particularly challenging adjustment for newly-married couples.]

We suggest that the two of you take a few weeks off. This will allow your friend to get her life back in order and to sort through her feelings. Then, as long as she is agreeable, start to date the way you did when you first met: no more than 2-3 times a week. These should be real dates, rather than just hanging out together. During this time, don't bring up the subject of your future. Instead, enjoy each other's company. You can speak by telephone on the days you don't go out, but don't allow these calls to take up large blocks of time.

We can't predict how this story will end. We've seen some women get so emotionally overloaded that they cannot recapture the good feelings they once had. Other times, this break and subsequent "dating diet" is enough to get a lifelong romance back on track.

Dating Advice # 126 - Double Dating
Should I Break Up, Get Engaged or Keep Dating?
Time Is Your Precious Commodity
A Constant World in Flux
Comments
MOST POPULAR IN Dating
Our privacy policy