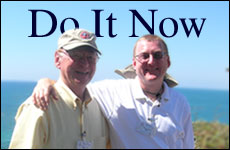 Sometimes there are no second chances.

It was June. I had been working very hard for a number of months, and had just successfully concluded a very large transaction. Physically and emotionally, I needed a break.

An email was pushed to me -- a trip to Israel, with speakers I had never heard, and to places I had never been. It was perfect, and my wife graciously agreed. It was fairly last minute and the only flight I could get was Los Angeles -- New York -- London -- Israel. Grueling, but worth it.

The Sunday before my trip, I was barbequing in the backyard and called my father on the cell phone. My parents, who live in Dallas, were going to be in Connecticut for a bar mitzvah the same weekend that I was flying through JFK, so I thought it would be nice to try and meet.

I was telling my father about the trip, and he was interested in every detail. "Wow, that just sounds wonderful. I wish I could go to Israel again."

And in one of those rare moments of clarity, I blurted out, before I could really think of all the reasons why what I was about to say was wrong, "Why don't you come with me?"

"You are going to be in New York anyway. Just bring two extra shirts and a passport."

My father played his hole card. "The money -- it's just too expensive."

It must have been because I was sitting out in the sun, or maybe it was the half a beer I had drunk, but the next thing out of my mouth was, "It's on me. I have a single room and you can stay with me."

Taken aback, my father said, "Let me speak with your mother. I'll get back to you." Five minutes later, the phone rang. "I'm in."

What had been a respite from work had suddenly become a father/son trip.

I gulped. What had been a respite from work had suddenly become a father/son trip. I got online, and ten minutes and one large credit card bill later, he had a seat next to me on the plane and a spot on my trip.

Before I knew it, I was on the way to New York to meet my father. I had mixed emotions -- excitement over the trip, but also trepidation about my traveling companion.

My father and I were close, but we hadn't lived in the same town for 30 years. Eight days together, without any other family... I couldn't remember ever spending that much time alone with my father.

TRYING TO KEEP UP

I was waiting by the gate, reading the newspaper, and I felt a hand on my shoulder. I looked up, saw his smiling face, and all trepidation disappeared. With many decisions we make, we can see pros and cons -- with this decision, there were only pros, no cons.

Two flights and a long cab ride later, we were in Jerusalem. I needed to make phone calls home and to the office. My father (and I'm supposed to be the religious one in the family), wanted to go to the Kotel to take pictures. I needed to take a nap; he needed to see the town. Who's the elder one in this relationship?

It's hard to explain how special our time was together. Seeing my father passionate about something so central to who I am and doing it together, was one of the highlights of my life.

Friday night, we got dressed up and went to the Kotel. And for the first time in my life, I danced to Lecha Dodi with my father and a hundred yeshiva boys. And I thought, God willing, maybe my children will take me here someday.

When we hugged, we knew that we had done something special together.

In what really felt like the blink of an eye, we were on a plane back home. Israel -- London -- New York. At JFK, we parted, him to Dallas, me back to Los Angeles. But when we hugged, we knew that we had done something special together. Something unplanned, unprepared for, and in the end, spectacular.

My father mentioned the trip many times to me over the summer. He sent me copies of his pictures. There we were, in Tel Aviv, overlooking the Mediterranean, smiling together. Memories that will last a lifetime.

In September, my father contracted a staph infection. The doctors didn't know why, and it took weeks of penicillin to cure. He came home older, but determined to recover.

Two weeks after he got home, he was given permission to start exercising. His first morning back on the treadmill, he died, probably of a heart attack.

I miss him badly. I miss him three times a day when I say Kaddish. I miss him in the odd minutes, when I should be working, or concentrating on my driving. I'm comforted that he lived a long, fulfilled life, and that although he had much left that he wanted to accomplish, he had accomplished much.

I think back to what might not have been if I hadn't blurted out, "Why not come with me?" If I had stopped to think how much this trip was going to cost. If I had spent even a moment thinking, "Do I really want to burden myself with my father?" One of the greatest opportunities of my life would have been lost.

Sometimes it's better not to think. Sometimes you just have to say, "Do it now." Because if you don't, you may never get the chance.

Israel Calls
Vayelech 5783: Regret and Repent
Rabbi Sacks: Focus On the Important, Not the Urgent
Put Your Foot Down: Are Human Feet Poorly Designed?
Comments
MOST POPULAR IN Israel
Our privacy policy
Aish.com Is Looking for Great Writers