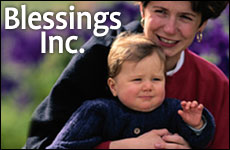 The Puah Institute provides fertility counseling and assistance for couples throughout the world.

"The hardest time for us is Passover," one childless woman explains. "My brothers and their wives smile from ear to ear as their children sing the four questions. And my husband and I sit there in pain, feeling inadequate and worthless."

One husband who waited five years for a child recalls, "There was a lot of tension and fighting in the home because we were terribly in debt from all the treatments, and because, frankly, we were miserable. We stopped attending the family celebrations of friends because we found them too depressing."

Another woman says, "I used to be a happy, energetic person. After three years of fertility treatments, I am a different person. I have lost my joy of life. What does it mean to be a woman if I can't be a mother?"

Eighteen years ago, at the encouragement of former Chief Rabbi Mordechai Eliyahu, Rabbi Menachem Burstein founded Jerusalem's Puah Institute to address the needs of the one in seven Jewish couples, like the ones quoted above, who experience difficulty becoming pregnant.

Rabbi Burstein, who had dedicated 25 years to Torah study, quickly became a self-educated expert on the new and revolutionary field of fertility medicine, as well as a leading expert on fertility in Jewish law.

Initially, the Institute was housed in a corner of the already crowded two-room apartment.

For its first two years, The Puah Institute was housed behind a curtain that was pulled out in the evening hours across a corner of the living room of the Burstein's already crowded two-room apartment.

When Rabbi Burstein counseled couples, he turned on music tapes in the living room so that the eight Burstein children would not hear or disturb the couple meeting with their father behind the curtain.

Today, thanks to Rabbi Burstein's tireless efforts, the Puah Institute has grown into a worldwide organization with its headquarters located in a four-floor building in Jerusalem's Givat Shaul neighborhood.

Rabbi Burstein devotes almost every moment of his day to doing good for others. This means that he and his wife, a teacher, often eat dinner at one in the morning, after the rabbi has spent a long morning, afternoon, and night speaking with couples in need, or consulting with medical experts and leading rabbis on behalf of those couples. 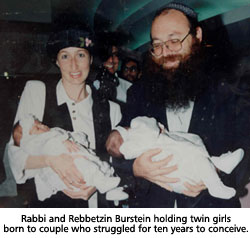 When I asked Rabbi Burstein where he acquired his selfless drive to help others, he mentioned his grandfather who was the only kosher butcher in the small Jewish community of Uruguay.

"My grandfather would always stay open extra hours since he knew that if his store was closed, his customers would simply kill a chicken themselves, and eat non-kosher meat."

Self-sacrifice for the individual needs of a fellow Jew was also a central value in his parents' home. His father, who headed a yeshiva for many years, and his mother, who was an active volunteer, taught their children by personal example that Torah learning must always go hand in hand with performing acts of kindness for others.

Rabbi Burstein's demonstrates great sensitivity to the individual needs of each couple.

He told the story of a mother of two with fertility problems who was afraid to fly to Cyprus to perform an important fertility treatment. Rabbi Burstein spent days speaking to doctors, the Israeli Ministry of Health and the Israeli Ambassador to Cyprus, trying to arrange for this woman to receive the treatment without leaving Israel.

After tremendous effort, Rabbi Burstein was able to arrange for the woman to perform the first part of the procedure in Israel. He then flew a Puah employee to Cyprus immediately after the procedure with her fertilized egg.

The only problem was that after the procedure, the egg had to be re-implanted inside the woman by the end of the day, and in Cyprus there were no more flights back to Israel. No problem! Rabbi Burstein tracked down someone with a private plane to fly the employee back to Israel.

Nine months later, this grateful woman and her husband cried tears of joy when she gave birth to a healthy baby boy.

This story exemplifies Rabbi Burstein and the Puah Institute as a whole.

Rabbi Burstein could have easily told the woman, "I'm sorry you're afraid, but get over it! No Cyprus, no baby."

But he took her emotional needs seriously in order to ensure that she would be totally comfortable during the procedure.

He could have thought, "She's got two children. Why should I go to such great efforts to help her?" But for Rabbi Burstein, every couple struggling with infertility equally deserves his help. In his mind, there is no hierarchy of misery.

Puah's staff now consists of eight rabbis who are experts in the medical, halachic, and emotional issues surrounding infertility. They receive over 150 phone calls and emails a day from couples in need from around the world. All of these people are assisted by the Institute free of charge. The organization is funded completely by donations.

The Puah Institute brings 1,500 babies each year to couples struggling to conceive.

Just under a fifth of the couples served by the Institute are English speakers living in Israel as well as in the United States and other English-speaking countries. These couples are counseled by British-born Rabbi Gidon Weitzman, the director of Puah's English department.

The Puah rabbis will often meet with a couple for several hours. After a careful look at their medical records, the rabbis will suggest a treatment plan, and the top doctors to treat them. The rabbis also speak with the couples about how the procedures can be performed in strict accordance with Jewish law.

The Puah Institute is directly involved in bringing about the births of 1,500 new babies each year to couples who had struggled to conceive.

To learn more about counseling, educational seminars, or halachic supervision of individual IVF treatments provided by the Puah Institute please visit www.puah.org.il or call 718-336-0603 (US) or 02-651-5050 (Israel).

Related Articles:
My Own Stroller
Filling the Void
Pregnancy and Loss
Adopting Ilana

Israel is the New Jew