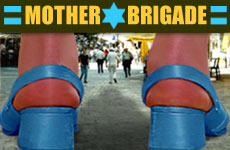 My mother led a one-woman solidarity mission to Israel to prop up the nation's economy and flagging spirits.

My mother stands all of 5'2 but, sometimes, she seems like a giant.

The same week that the largest movement in American Judaism cancelled its summer youth trips to Israel, my mom showed up at Ben Gurion airport ready to make up the difference.

My mother is a very cute little woman who, at 56, has retained something of a wide-eyed cheerleader air. Yet, when she gets a hold of an idea, she just won't let go. Although it happened to coincide with the painful canceling announcement, her trip was hastily planned a few weeks ago, squeezed in between major projects at work. Sure, she wanted to check up on her only daughter. But she really wanted to do whatever she could to stand in solidarity with the people of Israel.

WHAT CAN ONE PERSON DO?

At first, I found this quite funny.

As the e-mails flew back and forth hatching the details of her trip, I'd snort to friends about my mom's Mission: she wants to spend as much money here as she can. Understand, much as I might wish otherwise, my mom is no Michael Steinhardt. She's a generous woman, but the thought of her disposable income making any serious dent in the shortfall left by the tourism drought seemed laughable.

Yet when I chuckled affectionately about the one-woman-solidarity-mission, I was met not with grins, but with pauses, long moments in which indecipherable emotions crossed my Israeli friends' faces.

The emotion behind the pause, I came to realize, was gratitude.

In normal years, Jerusalem overflows with tourists - Jewish tourists - during the summer months. There are entire swaths of downtown I customarily avoid, lest I be crushed by hordes of baseball-cap wearing kids from NFTY teen tours. At the Western Wall, synagogue after synagogue trips pose for group pictures. Tour buses clog the already-crowded streets and we Americans-by-birth cringe listening to our visiting countrymen try to bargain down shopkeepers' set prices.

Not so this year. We practically had Ben Yehuda, the pedestrian mall in the center of Jerusalem, to ourselves. The square in the middle of the Jewish quarter of the Old City, ringed by stores, stood empty.

The economic effects are devastating. Tourism is down by 46 percent compared to last year, according to the ministry of tourism. The ministry estimates the loss for the last quarter of 2000 alone at $1 billion. Even if the situation improved dramatically tomorrow, it would take 12 to 18 months for the tourist trade to begin to recover. Groups book that far in advance, so filling up the hotels and empty tour guide schedules won't happen overnight.

Hotels and restaurants have laid off staff, closed wings or branches, or even shut down altogether. Tour operators and tour guides are almost completely without work. In the hotel industry alone, a minimum of 15,000 to 20,000 jobs have already been eliminated or furloughed.

As devastating as the economic impact is, the absence of tourists hits deeper. Israelis feel abandoned.

We are going about our daily lives, expectantly listening to the news every hour, hoping and praying that the latest cease-fire violation won't take anyone's life along with it. We're losing sleep when our husbands, sons, boyfriends and brothers are called for reserve duty in greater frequency and trying to squeeze out the sensation that, no matter what we do, the whole world is going to condemn us.

And then comes the news that our American brothers and sisters are staying home.

My mother mortified me time and again as she whipped out her camera to take pictures of the lines of people at the newly opened IKEA in Netanya. Yes, there's a crisis going on here, but that doesn't stop the entire country from massing on the reasonably priced Scandinavian furniture store.

Nor did it stop people from filling Jerusalem's Shopping mall in Malcha. There, my mother snapped shots of two cherubic-looking soldiers, telling them sternly to "BE SAFE" as she walked away.

"I want people to know that life is going on here, that life is normal," she would explain to shopkeepers and passersby as she documented their comings and goings, as I stood, face burning, in the corner.

"I want people to know that it's safe here!" she would declare, insisting that she feels less safe on the streets of Phoenix than she does on the streets of Jerusalem. She would explain to them how I walk my dog around my neighborhood in the middle of the night without a second thought.

"I'd want an armed guard for her to do that in the States!" she'd exclaim.

She told everyone who would listen that she is angry with her fellow American Jews for staying home, for leaving hotels empty, beaches abandoned, tourist sites barren, and an economy devastated. She is angry at them for staying home at the very time Israelis need to feel that someone in the world stands with them.

And, like every good daughter, I rolled my eyes when she said all this, until I realized something: I may have thought that was she was saying was silly and overdramatic and maybe even condescending to the tough Israelis. But the Israelis didn't.

Hearing her speech, a cab driver tried to refuse her money for a ride. He was overwhelmed and she had to force him to accept payment. Storekeepers, instead of taking advantage of a willing customer, gave her incredibly fair prices. The $15 or $150 she spent in each store isn't going to make up the huge losses businesses have been suffering, but her attitude - I saw slowly in the faces of the storekeepers - made a huge impact.

At some point, it occurred to me that the Torah portion being read the Shabbat she was here told of the spies who scoped out the land of Israel and can back bearing tales of a foreboding and dangerous land. The Jews cried and lost faith in the land that God had promised to them. For this sin, God punished us severely.

It dawned on me: my spunky little mother was enacting a modern-day tikkun, repair, of what the spies did. They came to Israel and scared people off, as some do today, whether it's talking about terrorism or inflation. But my mother came here to document the vitality and beauty and energy that is Israel. She came to scope out the land and go back and tell her fellow Jews how wonderful a land it is that God gave us, and how excited we should be that we can enter it.

In every store we passed, she marched in and bought some sort of trinket, big or small. "I am here to show solidarity with the Israelis!" she'd chirp.

She'd proudly explain to the storekeeper how her daughter lives here and she came to make a difference.

The thing is this: she did.

It's a complete body and soul experience, which will inspire you in every way. Learn from the greatest minds in the Jewish world today, just steps from The Western Wall. Spend Shabbat together in The Old City of Jerusalem. Hear first hand from Jerusalem Mayor Ehud Olmert just what is really going on there. What is the Palestinian claim to the land? Are they really using their children as human shields in battle? What can we do to support Israel at this time?

Stay in the luxurious Dan Perl Hotel overlooking the walls of The Old City. Enjoy tours, banquet breakfasts, cafe lunches, and shopping in the outdoor malls. And meet women just like you-- thinking, growing, questioning...make friendships that will last a lifetime.

There is still space available, but call today! Toll free, 1-877-613-0613, ask for Sheryl. She'll answer all of your questions and take care of all your needs.

Out of the Mouth of Roni
It Takes A Lot Of Faith To Be An Atheist
How Instagram Brought Back This Nostalgic Soup
What Makes Eli Run?
Comments
MOST POPULAR IN Israel
Our privacy policy