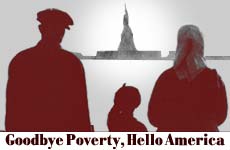 On July 4th, after the fireworks and the watermelon, I remind myself that we're celebrating the signing of the Declaration of Independence, the second paragraph of which contains those magical five words, "All men are created equal". In its day, in 1776, that short phrase was a political thunderclap that shook the world -- especially our Jewish world.

And it leads me to remember our Old World origins, B.A. -- before America. Of course, after a glass or two of Magen David every synagogue member will claim his grandfather was the Head Rabbi of Poland and his grandmother was the only Jewish Grand Duchess of Lithuania.

If you believed all these bubbameisers, you'd have to admit that the Jewish population of Eastern Europe featured 300,000 rabbis, another couple hundred thousand Lithuanian duchesses, and three guys named Herschel who left no descendants whatsoever.

After my wife, in grand tones, describes her lineage, she adds, "Oh, I forgot, we're also kin to Joseph Goldberger, our relative who cured Pellegra in the South."

"Yeah, how's that? 'Cause your maiden name is Goldberger? So by the same logic you're kin to Bugs Goldberger, a champion serial killer of the 40's."

My heritage is a little different. I think my Great Uncle Chafetz was a scrap dealer in Vilna -- a time-consuming profession which prevented him from becoming one of those 300,000 learned rabbis.

My family missed the Mayflower by a couple of centuries.

My family missed the Mayflower by a couple of centuries. They also missed the Queen Mary. There were no deck chairs on the cattle ships that brought them to the New World of silver lampposts and golden sidewalks. And I'm sure my grandmother never dined at the captain's table. More likely, she brought a sack full of kosher hamburger or the 19th century Lithuanian equivalent.

They were stuffed in the hold like pickles in a jar and probably didn't spend the eight-day crossing mourning what they left behind -- the poverty, hunger, persecution that ruled the masses of Eastern Europe -- Jew and gentile alike.

There's a deep ache in our hearts when we think of the old world consumed by the Holocaust, as lost to us as the Holy of Holies destroyed by the Babylonians in the 6th Century BCE. What would those martyrs say to us? What would they think to see our cars and homes and VCRs and full pantries? What would they say to our dilution -- our integration with a warm, tolerant society?

Anyhow, that was the grim world fast receding in the rear vision mirror of the Good Ship Hatikvah, steaming for the New Jerusalem, a brave New World where the only king was "Abie, the King of Corned Beef" on lower Hester Street.

They poured out of their boats into the sidewalks of New York, which they found to be of concrete, not gold.

And they poured out of their boats into the sidewalks of New York, which they found to be of concrete, not gold. But concrete was better than the muck and mud of Polish villages. And sweatshop bosses had hearts as hard as the concrete sidewalks, but they wouldn't kill you or take your daughters for pleasure and your sons for their army.

They would only fire you. And right around the corner was another who'd give you the same handful of silver that bought lots of bread and cheese and even meat.

There was too much work and not much leisure. But nobody starved. And if a family jammed up in a cheap flat and emptied all their handfuls of silver in a single pile, eventually they could transform themselves into the nobility of this new world. Here, it only took money -- money for goods, money for education. This was a game they knew how to play. Suffer now -- prosper tomorrow. A bargain -- a very small price compared to the fate of those they left behind. A meshuberach, as we say in shul: God bless America on this 4th day of July.

The Figure in the Doorway

Hanukkah and Breaking Free from Mindless Routine
Vayelech 5783: Regret and Repent
Rabbi Sacks: Focus On the Important, Not the Urgent
Put Your Foot Down: Are Human Feet Poorly Designed?
Comments
MOST POPULAR IN Family
Our privacy policy
Aish.com Is Looking for Great Writers