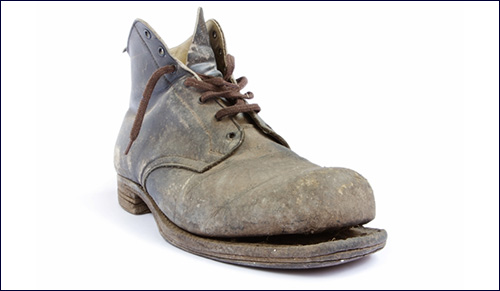 From the Death March to Israel, a piece of leather connects generations.

Velvele was about 13 years old, with a face that told of horrific experiences in the Holocaust. No one ever asked him what he had been through. In the detainment camp in Cyprus you knew what you could ask and what you couldn't. No one wanted to make the wounds even deeper.

Velvele didn't usually participate in the social activities and when he did, he appeared distant, strange. Now he had a fever and they'd sent him to the hospital in Nicosia.

"We thought we'd give Velvele a surprise," said two kids from his hut, "and make him a new pair of shoes. He always walks around in those tatty shoes three times his size."

Moshko, their counselor from Israel, pat them on the back and said, "Good idea. Go for it!"

Velvele returned a few days later. Next to his bed stood a brand new pair of shoes.

"What are these?" he asked in horror. "Where are my shoes?"

"Err… we wanted to surprise you so we made you some new shoes and threw your old ones out," his friends said apologetically.

Those shoes belonged to my father. We were on the Death March and my father knew he was going to freeze to death.

Velvele was distraught. He held his head in his hands and screamed, "Bring me my shoes back!"

The boys rushed to call Moshko.

He tried to calm Velvele down. After a few more minutes of shouting and screaming, Velvele told Moshko his story.

"Those shoes belonged to my father. We were on the Death March when one night my father knew he was going to freeze to death. He said to me, ‘My beloved Velvele, I'm about to die, so when I do, take these shoes. They will warm your feet and keep you going to the end of the march. They will keep you alive.’ The next morning I removed the shoes from my dead father and have worn them ever since.”

Moshko immediately gathered the boys together and told them Velvele’s story. He ordered them to search every single garbage can in the camp and told Velvele they were going to do all they could to find his shoes.

After an hour of searching the boys came back. "It's impossible. We can't find them. We tossed them out a few days ago."

Moshko did not give up. He managed to get a special permit from the British to follow the garbage truck out to the dump and have the boys burrow their way through the huge mounds of dirt and garbage.

But the second was nowhere to be seen.

Moshko had to tell Velvele the bittersweet news. "We found one, Velvele," he said hugging the boy, "but we couldn't find the other."

Velvele began to shake but Moshko held him tight. "You know Velvele, maybe this is a sign from Heaven. You certainly need to remember your father and all the love and warmth his shoes represent, but perhaps it's a sign you've started life anew and you don’t need to wear them any more. The shoes saved you then, but now you have to walk a new path."

Velvele listened, hugging his shoe and – without looking up – slowly nodded his head.

A few months later, Moshko helped Velvele and the other boys move to Israel, where Velvele fought in the War of Independence. Sadly, he fell in battle. There was barely anyone to tell of his death.

When they went to his room to gather up his belongings, they found the shoe.

One Jew.
One shoe.
Holding the history of an entire people.

Translated and adapted from "To Build a Land: The life of Moshe 'Moshko' Moskowitz,” by Efrat Krausz, recently published in Hebrew by Sifriat Bet El

Deborah Lipstadt on Anti-Semitism and the Joy of Being Jewish
Big OnThe Little Things
Chraime Egg Boil
Is Grease the Word?
Comments