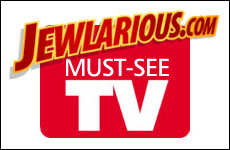 Genre: Situation Comedy
Date: Thursday Nights 8 p.m.
Synopsis: A geriatric father and animal-rights advocate struggles to raise three boys while the world around him is destroyed.

Television's favorite "Man who walks with God" returns for a second smash season. Save yourself and join the fun as Noah's three sons Shem, Ham and Japheth compete with an Ark-full of animals for their father's attention. Just don't forget good old Mom. And do you know her name? All will be revealed this Thursday night.

This is one Full Houseboat of laughs you won't want to miss! See what critics call "The #1 reason to come in out of the rain."

Noah's wacky neighbor ‘Og the Giant' pays the family a surprise visit. The laughter is contagious when Noah must draw on his sheer animal magnetism to contend with this real ‘hanger-on' who refuses to leave.

THE FINAL CUT: THE SEARCH FOR ISRAEL'S NEXT SUPER MOHEL

Fourteen mohels live together 24/6 to compete for incredible prizes including $50 in gauze plus, a feature fashion spread in MoyElle Magazine. Contestants able to endure the rigors of Bris Boot Camp advance to the Catwalks of Tel Aviv where they are judged on their poise and technique. Panel judges are comprised of mohels and representatives from several world-wide kashrut agencies with the authority to offer international moheling contracts.

The highlight of every show concludes with one winner chosen to perform that week's Bris on a surprise (and surprised) Celebrity Guest Baby.

At his son's Bris, Ashton Kusher gets Punk'd! Don't miss this, and Mazel Tov, Ashton!

IN THE HEAT OF THE NIGHT II: FATAH'S DEADLY FALAFEL

Genre: Made for Israel TV Movie Special Event
Staring: Sydney Poitier
Synopsis: A rabbi solves a murder at a falafel stand in Jenin while winning the respect of local Arab terrorists.

Two anniversaries commemorated in one movie makes for one full night of spectacular television!

Back in ‘67 he was a cop from the racially torn streets of Philadelphia. Today, he's a rabbi from Jerusalem with a nose for falafel. The only one trusted by both Fatah and Hamas to identify the poisonous chick peas that have been used to kill in the terrorist war between the two factions. Forty years ago his name was Virgil. Today he's Shmuel.

And by the way; they no longer call him Mr. Tibbs. Instead, they call him... Mr. Tibbon. Shmuel ben Judah Ibn Tibbon, that is.

Newton Hoffer is a Senior staff writer for the popular comedy website www.funnyandjewish.com. He currently resides in Thornhill, Canada, as part of a Minyan Protection Program under an assumed name with his unassuming wife Hadassah and 4 children."