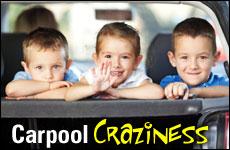 I miss the school bus. Not that I’m chasing after it yelling “Wait!” but I yearn for it.

Sometimes I miss the school bus.

OK, I just reread that sentence. I meant that I yearn for the school bus. Not that I chase it with my coat on one arm and my knapsack half open, yelling, “Wait!”

I don’t miss actually going on the school bus and vibrating my way to school while the bus driver keeps yelling at everybody to sit down because for some reason, large vehicles full of small children do not legally require seatbelts. I actually like that I can drive now, at my own schedule, in my own vehicle, in which I try not to hit every single pothole on the street. But I have been driving long enough that I’m starting to resent schlepping out in the car sometimes.

I refer here, mostly, to carpools. My kids’ school doesn’t have bus service, for reasons that are not entirely clear. So we have to carpool twice a day for each kid, and some of them don’t end at the same time as the others, and some of them, such as my daughter, go to school in an entirely different building than my sons.

It all gets very complicated, because of the car seats.

It’s not even like there’s some organized school-wide carpooling system with someone overseeing it and focusing on convenience, and if you live in the same basic area or on the same basic block as someone else, you get to be in their carpool. Everyone has to fend for themselves. You move into town, and it turns out that everyone on your block already has a carpool that they’re happy with, but it’s not with each other, because it’s not like they all moved onto the block at the same time either. And then when one of their carpools falls through, they have to find someone else who doesn’t live near them, because the chances of two carpools on the same block falling through at the same time are pretty small too.

It all gets very complicated, because of the car seats. Kids nowadays have to sit in car seats until they’re old enough to drive. So sometimes you carpool with someone for several years, and then all of a sudden, you each have another kid entering school, and you have no room. Or someone suddenly has more babies, and she can’t very well leave them at home, because if they’re too young to go to school, they’re too young to babysit each other while she does carpool. And most people have vehicles that are just big enough for their own families. So if a family becomes too big, even if you’ve been carpooling with them for years, you’re going to have to drop them and try to find someone who for some reason has a car that is way too big for their own family, but for some reason can’t convince their chauffeur or any of the maids to drive carpool every day.

So every carpool ends up with a different system based on everyone’s specific situation. For example, my kids go to a private Hebrew school and my sons are on the boys’ campus while my daughter is on the (very distant) girls’ campus, and they get out at approximately the same time, so it’s pretty much the same parents driving single file across town from one school to the other. So if you’re carpooling with another family, you have a choice:

This is why, at the end of the day, I would do pretty much anything to avoid driving carpool. So my wife makes me drive in the mornings and she does afternoons.

This is my wife’s current carpool system on some afternoons: She drives the boys’ carpool, consisting of our sons and a kid named Langstein who lives a few blocks away. Not a huge deal.

We actually have a family right across the street from us -- the Kagans -- who have a whole mess of boys (a group of boys is called a mess), but they don’t carpool with us. They carpool with the Kirschenbaums, who are actually friends of ours.

But unfortunately, Mrs. Kirschenbaum’s car is not big enough to hold all the Kagan boys and whoever else she’s doing carpool with, PLUS all of her own kids, and she’s actually one seat short. So the kid that she doesn’t pick up is her own son, which I think kind of defeats the point of carpool.

So instead, my wife picks up Mrs. Kirschenbaum’s son, and he hangs out at our house until his mother shows up across the street to drop off the Kagan kids, at which point there is finally room for him in her car.

At that point, my wife drops our boys off at the Weinsteins, who live next door to the Kagans, and then goes to pick up the girls, including the three Weinstein girls, which is why there’s no room in the car for our boys. Although technically, Mrs. Weinstein isn’t home at that point. She is actually off at the boys’ school, picking up her son’s carpool. We actually leave our boys with the Weinsteins’ cleaning lady, who doesn’t really speak English and doesn’t understand any of this. I do speak English, and I don’t quite understand it, so I could have gotten some of this wrong.

And this is only one night of the week. The other nights are worse. My wife actually spent several hours at the Weinsteins’ house at the beginning of the year, planning all of this out with action figures. But I don’t have to understand it, because while all this is happening, I’m stuck teaching high school, thank God.

So I drive every morning, which means that I have to get up bright and early every morning and realize that even though my kids have been out of bed for at least two hours, they’re all still in pajamas, and have given absolutely no thought to breakfast or lunch. I don’t drive my daughter, though. My daughter goes to school with a carpool, driven by Mrs. Zilber, who honks outside our house, which is my daughter’s cue to get out of bed, stop playing around, and get dressed, and maybe pack some lunch if she remembers. And then, when my daughter gets into the car, Mrs. Zilber makes a U-turn and honks outside the Weinsteins’ house for ten minutes, with her van still technically in front of our house, and even though the school is in the opposite direction. Then, after all three Weinstein girls get into the car, one at a time, Mrs. Zilber makes another U-turn, passes our house again, and drives to school.

So I’m lucky. I take no one but my own sons. But I still view it as even, because my wife doesn’t have to get up, according to my calculations, until about three-thirty.

So yes, I’m over thirty years old, and I still miss the bus. 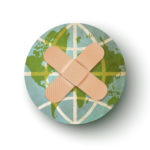 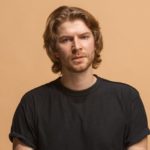