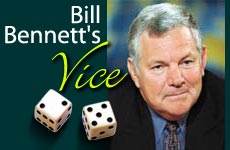 Accusations of hypocrisy leveled at the author of "The Book of Virtues" teach us an important lesson about how we instill values in our children.

Is William Bennett a hypocrite?

Turns out the best-selling author of "The Book of Virtues" has a vice: he likes to gamble. A lot.

According to recent reports in Newsweek and The Washington Monthly, the former drug czar and moral crusader lost millions of dollars in Las Vegas and Atlanta City since the early 90s. And the commentators sure are having a field day.

Michael Kinsley writes in Slate, "Sinners have long cherished the fantasy that William Bennett, the virtue magnate, might be among our number. The news over the weekend -- that Bennett's $50,000 sermons and best-selling moral instruction manuals have financed a multimillion dollar gambling habit -- has lit a lamp of happiness in even the darkest hearts."

Hypocrisy is saying one thing and doing another -- while justifying it with a double standard.

Personally, I don’t know what all the fuss is about. Bennett never claimed to be the perfect role model of virtue and morality. Nor is he a hypocrite. Hypocrisy is saying one thing and doing another -- while justifying it with a double standard. "You should quit smoking! But I don’t have to."

Saying something and not succeeding to live up to the standard one has set for himself and others is not hypocrisy. It’s inconsistency.

Every one of us is inconsistent to some degree. We tell our kids to eat healthy foods, and then lose ourselves in a pint of Ben and Jerry’s once they're in bed, safely tucked away. We yell at our kids, "Don’t yell at each other!"

The hypocrite can do no wrong. We take offense to his arrogant preaching that is directed at everyone but himself.

An inconsistent person doesn't apply a double standard. He's not perfect. He recognizes his flaws and often berates himself for succumbing to his weakness.

Bill Bennett never said, "Americans should not gamble. But I? No problem!" The only scoop here is that -- surprise, surprise -- Bennett isn't the embodiment of all the virtues that he believes are important to instill in today's youth.

Perfection is not the prerequisite to teach values to others. If it were, what right would we have to teach our children?

Perhaps part of the reason for the vociferous attack on Bennett stems from the prevalent but misguided notion that the only way to teach morality is by being a role model.

Don't get me wrong. "Do as I say, not as I do" is obviously an ineffective tactic. If you want to instill the trait of humility in your kids, being a role model is extremely important. But it is just as important to actively teach and articulate the ins and outs of developing this trait. Why is it important to be humble? How does it differ from meekness?

"You shall repeat them to your children and speak of them" Deut. 6:7.

Teaching any important subject requires comprehensive understanding and lucid instruction. The same goes with teaching values. Just being a role model leaves far too much unstated and fuzzy. It reinforces what a child learns, but it doesn't replace the actual education of values.

Even if parents don't model the value they're teaching, the lesson can still be inculcated, albeit not as effectively. My six-year-old son brought this lesson home to me. A few weeks ago we were walking by one of his favorite local spots -- an enclosed yard that housed two ducks. That day, a few kids from the neighborhood were lobbing pebbles at the ducks, taunting them. My son was completely flabbergasted at their behavior and exclaimed, "What -- didn't they go to heder [religious school] and learn about tzaar baalei chaim [the Torah prohibition against causing needless pain to animals]?!"

For my son, it was a just a given that he and his peers should live according the ethics they are taught in heder. It wasn't my role modeling that taught him this value (we don't happen to have any animals around the house). It was something he was taught as part of his Jewish education.

For the same reason, my ten-year-old daughter, who spent the recent spring break running a small "camp" for a group of kids, decided on her own to give ten percent of her earnings to charity. She didn't pick this mitzvah up from watching her parents write checks (which maybe we should be doing in front of the children), we had discussed it with her around the Shabbat table.

My kids are not angels. But seeing that their Jewish education is actually being internalized and informing their personal decisions gave me an appreciation of an aspect of Torah's genius that I previously knew only in theory. It takes a whole lot of clarity and curriculum to raise moral children. The Almighty didn't leave anything up in the air, vague and non-descript. He gave us a Torah that explicitly defines and delineates the values to teach our children, the first "Book of Virtues."

Bill Bennett may not be the perfect model of ethical living -- who is? But his flaws do not forfeit his ability -- and responsibility -- to teach values. If they did, none of us could be effective teachers or parents.

I am struggling to become a role model for my children. I realize the more congruent I am with Torah, the deeper the impact I will make.

But my kids can't wait that long. They need to be taught Jewish values now.

How to Help Your Child Succeed

Coronavirus and the Challenging Child

Opening Our Homes: What's In It For Our Kids

Who's Minding the Kids?

Tales Out of School
Faith: the Axis Upon Which the Wheel of Science Turns
Love - Not Just About Chemicals Anymore!
Is There a Moral Code in a Virtual World?
Comments
MOST POPULAR IN Family
Our privacy policy