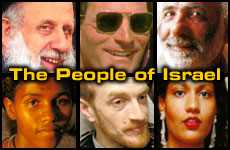 What shaped our trip to Israel wasn't the death of Arafat or even the beauty of the land. It was the people.

Every trip to Israel leaves me with a different impression. When we returned home this time, everyone wanted to know what it was like to be there during Arafat's death. Although we weren't oblivious to the situation or its potential significance, that wasn't what shaped our trip.

We traveled throughout the country. We saw the lush Carmel Forest, the green of the Galil; we sailed across the still waters of the Kinneret and we experienced the golden light of Jerusalem. But it wasn't the physical beauty of the land that shaped our trip (although it certainly enhanced it).

It was the people.

We were given a tour of an army outpost on the northernmost border with Lebanon by a resident of a nearby kibbutz. In his mid-40's (like our group), he lived with his wife and children in this remote corner of the country producing fruit (we tasted the apples and kiwis) and internalizing the power of the land with each action. Unafraid of the closeness to Lebanon, he left his comfortable world in the city to build a life of the land, on the land. Because the Jewish people and the land of Israel mean everything to him. Why was he unafraid? Although not religious, he quoted the words of the prophets affirming God's love for and protection of His nation.

Touring the army base, we met the young men and women (boys and girls really!) who are giving their lives to physically protect the land. We spoke to the girls who monitored any breach of the border fence (usually by animals). Talking to them -- with their braces and friendship bracelets -- they could have been teenagers anywhere. But they weren't.

The army representative on our tour was a young American who had made aliyah. Now, instead of listening to Eminem and hanging out at the mall, he was studying the terrorist patterns of Hezbollah and the different styles of armored tanks.

As we journeyed south we ate dinner overlooking the Kinneret. The proprietor of the restaurant explained how she chose that spot. To catch the tourist trade? Certainly. But what does “location, location, location” mean in the land of Israel? This was the spot, the renowned Kabbalist Rabbi Kadourie stated, where Miriam's well was extant. When you build a restaurant you think of the Jewish people.

We visited the Technion in Haifa -- Jewish know-how respected world-wide, improving lives through advances in technology and medicine. We met with a lovely, young observant mother of four -- and the leading stem cell researcher. After five years at MIT, she had come home to work for her people.

In Jerusalem we toured Shaarei Chesed, one of the oldest and simplest neighborhoods in the city, with a 70-year old woman who had grown up there.

“We didn't have a lot materially,” she explained, “but we had each other.” Times were tough, food was scarce, but the community stood together. And some of the greatest Torah scholars and righteous men and women of recent generations grew up and flourished there, nourished by the love of God for His people and the love of His people for each other.

And then there's nothing like Shabbos in Jerusalem. On Friday night we ate in the Old City at the home of some former American friends. At their beautiful home overlooking the Temple Mount, they host soldiers from throughout the country, not just on Shabbos but during the week as well.

Shabbos lunch in the German Colony. Our hosts were very involved in two organizations -- one to give aid and succor to victims of terror. Sleeping 3 - 4 hours a night, our hostess, who is also the mother of numerous small children, works tirelessly for the needs of others. The other organization is committed to bring Israeli schoolchildren (70% of whom have never been!) to Jerusalem, and educating them about its centrality in Jewish life.

And Saturday night was…sushi at the hotel.

Traveling through our land, each resident had a story more impressive than the last. And I even left out a few names -- a former cabinet minister working with a businessman from American to help revive the economy through shoring up “old” businesses, a professor at a Middle East think tank, a prominent author…

And our lives seemed smaller, less vivid, in comparison. There are many decisions one can make after a trip to Israel. There are many ways in which it impacts us. There are many needs. Our group made one small but significant resolution: we too would try to bring that level of commitment to our nation.

We too would try to commit all to help the Jewish people and the land of Israel. Each in our own way.

We would try to give our Heavenly Father nachas by doing what we can to bring unity to His children, throughout the world, across all borders.

And if we can hang on to those moments in Israel when we really believed it was all possible, maybe, just maybe, this time we can succeed.

Found in Translation
Is Grease the Word?
Dried Fruit Compote
Scientific Curiosity and the Divine Encounter
Comments
MOST POPULAR IN Israel
Our privacy policy
Aish.com Is Looking for Great Writers