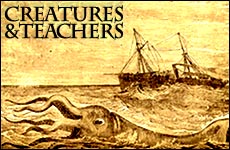 Maimonides' mystifying rodent and the limits of science.

What might the giant squid have to do with the venerated Jewish scholar Maimonides? On the surface, of course, very little. All the same, though, serendipity recently brought them both to mind.

An article about the quest to capture a live giant squid, a monstrous and elusive sea creature that can grow to sixty feet in length and surveys its surroundings with 18-inch-wide eyes, appeared recently in The New Yorker Magazine. Then, just about a week later, students of the page-a-day Talmud study program known as Daf Yomi focused on a reference in the tractate Chullin to another bizarre creature, a rodent described as spontaneously developing in stages from soil.

As it happens, in the contrast between a French zoologist's comments on the giant squid and Maimonides' on the soil-rodent lies an invaluable lesson about what a true scientist is, or should be.

Until 1873, there were only claims, but no hard evidence, of the giant squid's existence. That year, though, a fisherman off the coast of Newfoundland struck a large sea-creature with a hook and then hacked off one of its tentacles. The appendage was later measured to be nineteen feet long. Over subsequent decades, intact carcasses of giant squids were discovered washed ashore on various beaches. Thus ended centuries over which the animal was assumed to be imaginary.

Just a few years before the monstrous tentacle was obtained and the giant squid passed from the realm of myth to reality, Arthur Mangin, a French zoologist, dismissed sailors' claims that they had seen the animal, urging that

"the wise, and especially the man of science, not admit into the catalogue those stories which mention extraordinary creatures... the existence of which would be... a contradiction of the great laws of harmony and equilibrium which have sovereign rule over living nature."

Just about 700 years earlier, Maimonides crafted what would prove a powerful literary legacy. He was not only a Jewish legal scholar and authority of the first order (one whose religious texts are a mainstay of Jewish study to this day) but a philosopher and scientist as well, and he earned his livelihood as a man of medicine -- an author of medical texts and the official doctor of Saladin, the Sultan of Egypt. So great a master of so much was he, a contemporary thinker once wrote, if one did not know that Maimonides was the name of a man, one would naturally assume it was the name of a university.

Among Maimonides' important works is his commentary on the Mishna, the foundation of the Talmud. According to Jewish law, the carcasses of some dead animals confer a certain form of ritual contamination, and the Mishna addresses whether contact with the still unformed soil-part of such a spontaneously generated rodent would impart such defilement. Consider Maimonides' words regarding the reference to the creature in question:

"...the existence of [such a creature] is something well-known; countless people have told me that they have seen it, even though the existence of such a living creature is incomprehensible and cannot be explained in any way." [Commentary to the Mishna, Chullin, chapter 9]

The difference between the reactions of the two scientists, each confronted with a claim that flew in the face of conventional wisdom, is subtle but profound.

Both are compelled to state that the reports before them defy scientific explanation. But whereas Mangin counsels a final rejection of the possibility that the report he received might have merit, Maimonides -- even as he notes the inadequacy of scientific knowledge to explain what he has heard - takes pains to allow for the incomprehensible.

The Talmudic creature could well have been intended as a theoretical construct. There are other references in the Talmud -- like another one in the realm of ritual defilement, to a "building that flies through the air" -- that are clearly intended as thought-experiments (although, ironically, the airplane would become entirely real a couple of thousand years later). And Maimonides, famed for his rationalist approach to things, could well have so characterized the rodent case. But, an open-minded thinker first and foremost, he chose instead to simply express the inadequacy of science to explain the claim, but to allow for the possibility that the popular lore might nevertheless somehow be accurate.

That, in fact, is what a true scientist does when an observation or report doesn't "seem to fit." In most cases a simple resolution soon presents itself -- an experiment clears up the matter, or the testimony is conclusively revealed to be flawed. In some, a new mechanism is postulated and demonstrated. And in others still, a question mark remains, sometimes until a revolutionary breakthrough - like the discovery of DNA or the idea of relativity or of quantum mechanics - turns yesterday's "science" on its head. And sometimes indefinitely.

Spontaneous generation may remain a discredited notion today (although it is intriguing that the theory of evolution would seem to be predicated upon it). And it is certainly not my intention to make a case for it here. But regardless of its veracity, how Maimonides treated a report of it in his day should have great meaning for us. Scientific hubris -- the conviction that the contemporary state of the discipline is surely the ultimate one -- is decidedly, in fact fatally, unscientific. A true scientist, like Maimonides, never loses the sense of the possible, acknowledges the unknown, holds tightly to the feeling of wonder that lies, in the end, at the roots of discovery.

Scientific self-assuredness, the assumption that ours is the generation that knows all that can be known, is no stranger to contemporary times. And so we dearly need the lesson Maimonides teaches us by his example, the realization that while science has surely made figurative and well as literal quantum leaps, none of us can really know what further leaps may lie ahead.

The Teen Who Got Oregon to Mandate Teaching the Holocaust

Kyle Kashuv and the Limits of Forgiveness