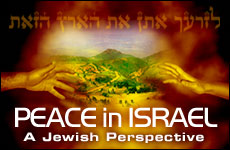 Peace in Israel is possible, but ultimately not through the force of arms.

The State of Israel may be 58 years old, but we are still fighting for our existence. We do not need the experts to tell us that this ceasefire is merely a respite; experience has taught us that lasting peace in the Middle East is a chimera.

The Declaration of Independence in 1948 defines the State of Israel as a Jewish country. No other country on earth is defined in terms of its religion. There are many countries where the majority of the population is Moslem or Christian, but a Christian has no right of return to England or France or the United States, nor will Egypt or Iran accept every Moslem. Every Jew, however, has the right of return and can become an Israeli citizen on demand. Why? Because Israel is the Jewish homeland and a place of refuge for world Jewry.

This is an inspiring concept, but it presents the Jewish people with an extremely challenging issue; how to define a Jew. It is absurd to call yourself a Jewish country if you have no clear idea of what being Jewish means, and yet that is precisely our situation.

To appreciate the problem from a Torah standpoint, we need some historical perspective.

At the time of the Exodus over 3,000 years ago, the world Jewish population stood at well over a million. All things being equal, the Jewish population today should be roughly equivalent to the Chinese; yet there are only 14 million Jews worldwide.

No doubt this enormous discrepancy is partially attributable to our blood drenched history, but most of the attrition in our numbers is the result of fallout. It took a lot of self-sacrifice to be Jewish throughout most of recorded history, and many Jews elected to drop out under compulsion or when the opportunity presented itself.

For example, in 1492 when the Jews of Spain were faced with the choice of conversion or expulsion, two thirds elected to convert rather than face exile. As the creation of the Inquisition attests, this conversion was no more than lip service, but over the course of generations these Jews disappeared entirely. Five hundred years down the road it is impossible to distinguish between the descendants of these conversos and ordinary Spaniards.

We owe the survival of the Jewish people to the Jews who chose to pay the cost of being Jewish in a hostile world.

We owe the survival of the Jewish people and therefore by extension, the existence of the modern Jewish state, to the Jews who elected to remain in the fold throughout the ages and pay the cost of being Jewish in a hostile world. The most recent evidence of the enormous cost of being Jewish is the Holocaust, an unprecedented phenomenon in human history. Not that genocide is rare, but systematic genocide on such an enormous scale when there is no territorial dispute between the contending racial groups to trigger the violence has no historic parallel.

The Holocaust in particular has a special connection with the establishment of the modern State of Israel. The collective guilt and horror of the nations of the world at the immensity of the atrocity perpetrated against the Jewish people was the major factor behind the recognition granted by the international community to the nascent Jewish state. For a brief moment, the peoples of the world recognized the necessity of a Jewish refuge. The State of Israel was paid for with Jewish blood -- the blood of the six million victims of the Holocaust as well as all the Jewish blood spilled over the last 2,000 years.

The majority of Israelis are secular and perceive themselves as members of the developed world; the aspirations of the modern Israeli are more or less the same as the aspirations of Western Europeans or Americans. Walking around Haifa or Tel Aviv feels little different than walking around Manhattan, Los Angeles or Toronto. The cars and buildings are not as big, but the people look and feel the same except that the language is Hebrew instead of English.

We have a long, long way to go before reaching end of Jewish history.

Is this what all the bloodshed, suffering and self-sacrifice of the past 2,000 years were about? Is this an appropriate culmination of the mighty heritage of the Jewish people? Did the heroic Jews of history surrender their lives to preserve their faith and stubbornly cling to their Sinaic covenant so that their descendants could enjoy the "good life" in the Holy Land and recreate a Hebrew speaking version of New York?

Modern Israel is not the culmination of Jewish history. It may be a step toward the fulfillment of our destiny, but given the fact that there is nothing particularly Jewish about happily pursuing the "good life" sheltered and protected by the might of the Israeli army, it is clear that we have a long, long way to go before reaching end of Jewish history.

The Almighty has made a covenant and He will not allow Jewish destiny to slip into oblivion. If the present situation in Israel fails to justify the existence of a Jewish state, Divine Providence will by necessity react with a tailor-made response designed to deliver the clear message that the Jewish nation requires. Israel will not be allowed to simply live peacefully here in the Holy Land when a wake up call is in order.

Jews are an extraordinary people. When I encounter non-Jews, I always attempt to enquire if they have any idea how many Jews there are in the world. The general response is hundreds of millions. This makes sense to me. Who could really believe that a people who are less than one percent of the world population could accomplish so much? Jews have won 30 percent of the Nobel prizes in science since they were awarded. Much of the intellectual progress made in the 20th century was fueled by the ideas of three Jewish thinkers: Albert Einstein, Sigmund Freud and Karl Marx.

Jews are an appreciable percentage of the intelligentsia of the developed world; they are doctors, lawyers, professors, writers etc. out of all proportion to their numbers. In prestigious universities they are a large percentage of the student body. Jews are at the forefront of all movements for social justice, and despite their relatively tiny numbers are responsible for a lot of the philanthropy in the Western world. They have managed to rebuild the Jewish state after a 2,000 year hiatus and to revive a dead language, both unprecedented accomplishments in the annals of human history.

Jews themselves are the only people in the world who do not realize how special they are. The desire to fit in and be like everyone else prevents them from focusing on the significance of their Jewishness and reaching clarity about what being a Jew means. There is little urgency in defining a Jew if Jews are identical to other people anyway. They need to be reminded that they have a historic mission which sets them apart, and it is essential to their security and well being to understand this mission and define it clearly. Divine Providence will present them with thought-provoking stimuli whenever they show signs of ignoring their Jewishness and abandoning their mission.

There is no question that a terrorist is fully accountable for his evil acts. It goes without saying that anyone who commits indiscriminate horrors in God's name will ultimately suffer due retribution. In addition to this fact, let us touch on the behind-the-scenes workings of Divine Providence that transcend the willing agents of destruction.

God will not let us ignore the question.

The suicide bomber who blows up a bus and the Hezbollah terrorist who aims his Katyusha rockets at innocent people with the declared intent of killing as many Jews as possible are powerful spiritual stimuli. They force Israelis to confront the existential issue of their Judaism. Why us? Why is it our fate to suffer bloodshed no matter how reasonable we try to be and no matter how many withdrawals we make? Why is it necessary in today's world, where civil rights have finally become entrenched in all developed countries, to maintain a Jewish enclave in the Middle East at such great cost? If we are really no different than other people, why is it worth sacrificing our children's lives to maintain a Jewish State? Perhaps we would be better off in the U.S. or Europe?

God will not let us ignore the question. The Jewish people signed a solemn agreement with God to be a "kingdom of priests and a holy nation". This undertaking is our social contract; it defines our place in the world as God's representatives. And this is especially true about the Land of Israel. The Almighty's promise to Abraham to deliver the land to his children is clearly conditional on their observance of their covenant with God. For I have loved him, because he commands his children and his household after him that they keep the way of God, doing charity and justice, in order that God might then bring upon Abraham that which he had spoken about (Genesis 18,19).

Peace in Israel is possible, but ultimately not through the force of arms. Our forefathers who were driven out of Israel twice knew this well, and Divine Providence treated them with greater severity than it treats us. Instead of sending them a wake-up call, Divine Providence banished them altogether.

In contrast, the typical modern Israeli is ignorant of the need to hold on to the Covenant of Abraham in order to hold on to his country. Providence will not banish him; it will provide him with stimuli to prompt a series of soul-searching questions that if taken to heart, could provoke genuine change.

This is no doubt painful, but the thrust is entirely benevolent. In Jewish thought ignorance is never bliss and the acquisition of knowledge is always painful. But through the workings of Providence, the Jewish people are learning. When the lesson is fully internalized there will be lasting peace.

While studying at the famed yeshivas of Chaim Berlin, Lakewood and the Mir in Jerusalem, Rabbi Noson Weisz also received a degree in Microbiology from the University of Toronto, MA in Political Science at the New School for Social Research and his LLB from the University of Toronto. Rabbi Weisz is currently a senior lecturer at Yeshiva Aish HaTorah in Jerusalem. Listen to a class by Rabbi Noson Weisz

97-Year-Old Holocaust Survivor is a Viral Sensation on TikTok
The Blue Beyond
Great Place to Live
Is Eating Supposed To Be Spiritual?
Comments
MOST POPULAR IN Israel
Our privacy policy