An Army with a Heart 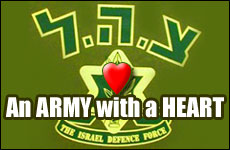 The IDF's duty is not only to defend the country, but to strengthen the weaker elements of Israeli society as well.

What does a combat-ready officer in Israel Defense Forces have in common with David Z., a 40-year-old man with a severe cognitive disorder, and Jacob M., a poorly educated, delinquent 16 year old boy? The answer is they all wear an IDF uniform and perform essential tasks for the Force.

The popular notion of the IDF is one of a highly professional, no-nonsense fighting force: It is the spectacular victory of the Six-Day War, the daring rescue of hijacked travelers at Entebbe airport, and more recently, the tough, if controversial, response to Palestinian terrorism.

However, this image overlooks a feature of the Israeli military, a feature that David and Jacob personify. The IDF has a softer, more caring side. It believes that it has a duty to strengthen the weaker groups and individuals in Israeli society as well as to defend the country.

Colonel Ronnie Kalinski, a senior officer in the IDF's Education Division, encapsulates the relationship between IDF and Israeli society as "the nation builds an army that builds the nation."

The nation builds an army, that builds the nation.

This view is more than that a single idealistic officer; it's part of the IDF's mandate. As such, two units of the Education Arm have specific responsibility for promoting and carrying out community-oriented programs.

A major focus of those programs is volunteerism. Soldiers devote some of their free time to underprivileged groups and groups with special difficulties in nearby communities. They provide companionship to isolated old people, and help them with minor repairs, house painting and other tasks. They also work with the children and youth of the area, especially those with learning difficulties and unfavorable home backgrounds, and with the handicapped.

For example, sailors help out at a club for pupils of the Shafririm School for Special Education on Kibbutz Givat Chaim. The voluntary work has a second explicit purpose, to expose young soldiers to the problems of society and inculcate the responsibilities of good citizenship.

In the case of David Z., the IDF benefits by giving him a chance to contribute. The International Center for Enhancement of Learning Potential (ICELP) is treating David with the aim of making him functionally independent. He and 15 young men like him spend five days a week at a nearby IDF base, where they perform essential work in the stores, kitchen, and mechanical workshops.

The project is an unqualified success. The IDF has found that the example of the special needs volunteers spurs the regular soldiers to improve their performance; and it has asked ICELP to extend the scheme to other bases. The head of ICELP, Professor Reuven Feuerstein, says that the program is more effective than any other method of treating people like David.

"They think of themselves as givers and not dependent on the goodwill of others. From this they are given the feeling if normality and the confidence that they can fit in – if they behave in such a way that they can be accepted... They learn new skills and work habits in a demanding environment."

David's mother sees her son's progress from a different angle. "He has become is more systematic, and more independent. Things I used to do for him, he insists on doing himself; and he plans and prepares in advance. When he has problems with others, he confronts them himself rather than whining to someone in authority."

Another aspect of the IDF's humanitarian persona is directed to what are called, euphemistically, 'special groups' of recruits and potential recruits. What is special about these groups is that they do not meet the regular criteria for enlistment – level of education, communication ability, acceptance of the norms of society. Knowing that rejection would add to the stigma associated with their objective deficiencies, the IDF relaxes the criteria for a broad spectrum of the problematic youth. Then, it helps them remedy their problems during the course of their service. The objective is to convert them into good, productive citizens rather than to transform them into model soldiers.

Most problematic are the youth who have been deprived of a proper education and who have not acquired a respect for the law and the norms of society. They come from dysfunctional families, or families that value the child's earnings over his education. Some of them had dropped out or were expelled from school, some are completely illiterate, some have learning disabilities, and some have criminal records.

Where possible, the IDF starts its work before the individuals reach the recruiting base. The specially trained soldiers that are sent into schools to prepare the leaving classes for recruitment, identify problematic pupils and begin to work with them.

An individual that does not meet the recruitment criteria is referred to the Center for Rehabilitation, which designs a program around his or her needs. He might remain in basic training for an extended period to provide an opportunity for adjustment to the realities of service, and for observation and evaluation of his abilities and needs. Then he participates in the decision his assignment for the remainder of his service. He often has to make do with something less than the combat unit he might prefer, but some individuals do make it to crack outfits such as the paratroops.

The approach is flexible and diverse. In the case of Jacob M., the IDF takes advantage of a synergy with the objectives of a Haifa pnimiah (boarding school.) The school in question is a closed institution whose pupils are referred to it by the welfare authorities.

Some of the children come from broken homes, many are victims of abuse or have fallen foul of the law, and all have a low level of education. The pnimiah's goal is fit the children for integration into normal society by helping them overcome their anti-social attitudes and poor self-image, and closing the gaps in their education. In Israel, an important stepping stone towards this goal is acceptance by the IDF.

As a means of preparing those, like Jacob, who a priori have little chance of surmounting this hurdle, the Vice Principal of the pnimiah, Jossi Saragossa, arranges for the local naval base to employ them for one or two days a week. They report to the base in uniform and learn the skills needed for specific logistic or service tasks. The project has shown concrete achievements in its nine years of its operation.

The IDF accepts most of the 'problem' cadets after they have spent three years in the scheme, and some enter the navy. A few have joined the permanent force at the end of their regular service. Sargasso has now initiated a similar scheme with the Armaments Division of the army, in order to provide a similar opportunity for troubled girls.

New immigrants are another special group. The IDF is the melting pot for Israel's diverse cultures and a vital tool for integration. When newcomers are found to have an inadequate command of Hebrew, and a poor knowledge of their new country and the structures and objectives of the IDF, they are given intensive instruction in Hebrew and familiarized with army terms and Israel's culture

Finally, there are programs for groups with specific problems, for example, the hard of hearing, and those who have passed through drug rehabilitation treatment. For the latter, the army experience, with its intensive socialization serves as a powerful vehicle for reintegration into society.

The IDF helps individuals overcome particular difficulties as part of their rehabilitation. It facilitates the conversion of those whom the State does not regard as a Jews, and might recommend that an individual's criminal record be expunged on the basis of his behavior in the army.

But the IDF's responsibility is not limited to the period of compulsory service. Towards the end of the three period, the individuals are given career counseling and guidance on furthering their education. In doing so, the Israeli army completes the circle of building the nation on which it is built.

This article originally appeared on Israel21c.org

A Wedding for the Jewish People

My Israeli Army Experience
The Promise Of The Land
Which Chat Are You On?: Parshas Behar/Lag Ba’Omer
Do You Like Slow-Cooked Food? Thank the Jews
Comments
MOST POPULAR IN Israel Diary
Our privacy policy