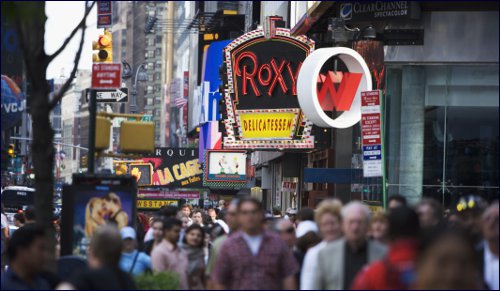 Something about Manhattan breeds detachment. Pedestrians cram the sidewalks. Their elbows practically touch. Yet eye contact is a rarity. A Manhattanite for many years, I confess that I too subscribed to anonymity on the sidewalks of New York. But that all changed on a sunlit spring afternoon in 1994.

A bank errand completed, I was heading home. I rounded the corner at Broadway and 72nd Street, my motorized wheelchair cruising me along at an impressive 7 mph. Amid the blur of people, someone halfway up the block was coming into focus. I tried not to notice her. She was impossible to ignore.

Approaching me was a slender young woman, with straight brown hair framing her pale face. She had a tentative smile and a four-footed aluminum cane. She sliced the distance one laborious step at a time.

As we neared each other, her smile broadened. I stopped and reluctantly waited. Supper, and my two children, needed attending to.

She appeared to have a problem speaking.

"Do you know my sister?"

She shook her head. "Sister."

She nodded. My brow furrowed. This wasn't making sense.

Suddenly, a scene penetrated the fog. A recent morning in my friend's spacious dining room. Some two dozen women seated around a long table. Cookies, coffee and the hum of conversation.

I had said I would visit. Two months later, I had done nothing.

"See that woman over there?" my friend had asked, her chin angling to her right. "Her younger sister had a stroke last month, just 10 weeks after getting married. She and her husband live right around the corner from you."

I had said I would pay her a visit. Two months had passed. I had done nothing. And here she was, beaming at me.

She nodded enthusiastically. I extended my hand. Her right hand remained limply at her side.

Attempting to mask my embarrassment, I effusively invited her and her husband for Shabbat dinner. She looked puzzled and glanced to her left. That's when I noticed her attendant. She must have been standing there all along.

"Since her stroke,” the attendant explained, “Bluma can't process things like days of the week and numbers." She retrieved a tiny memo pad from her pocket and recorded the pertinent information, including my address and phone number. "Her husband will get back to you," she said.

The attendant turned to her right. "Ready to go?" she asked. Bluma shook her head emphatically. Then her eyes locked with mine.

Her eyes were wistful, her voice tremulous. "Baby."

Steve, Bluma’s husband, phoned that night. I expected his voice to exude anguish or at least anxiety. Equanimity met my ears instead.

That Friday night, Steve and Bluma arrived at seven on the dot, looking like your average yuppie couple. We introduced them to our children.

We took our seats. Minutes later, my husband and I were stunned when Bluma joined in on Shalom Aleichem, the song with which Jews welcome the Sabbath angels into their home. I shot a bewildered look in Steve’s direction. He explained that some people with aphasia, the loss or reduction of speech following a stroke, are better at singing than speaking.

We spent the rest of the evening trading songs – Broadway, folk, Jewish, the works. We became fast friends, and Bluma and Steve came over for many more Shabbat meals, replete with lots of singing.

By the time Bluma traded her old four-footed cane for a sleek, slender one, she had become one of the most popular people on the Upper West Side. Everyone knew her. Everyone loved her. At the A & P, Denise, the most hostile cashier on the planet, lit up whenever Bluma approached. So did I.

I remember stopping impulsively at a clothing store one winter afternoon. There was Bluma, rifling through the sale rack. She was just as surprised to see me as I was to see her.

"Hey, what brings you here?" I asked.

"Who are you buying a present for?"

With a mischievous wink, she thumped her chest.

"Well, what with Chanukah coming up, I thought I’d pick up something for my daughter."

In a flash, she grabbed my forearm. She looked at me intently.

Her palm left my arm and flew to her chest. Her eyes widened.

"I!" Her expression made it clear that I wasn't getting away with anything. We compromised. We each bought my daughter a sweater.

On a Sunday the following autumn, Steve phoned. "Can we stop by?"

About an hour later, our doorbell rang. Bluma, her face glowing, had barely crossed our threshold when she began to hum Rock a Bye Baby.

Soon after, our family picked up stakes and headed for suburbia. Encounters with Bluma and Steve dwindled from infrequent to never. But nine years later, wedged between the inevitable catalogs and bills, a large cream-colored envelope – graced with fluid, delicate calligraphy – arrived in the mail. A bar mitzvah invitation.

Every bar mitzvah is a celebration. This was a lovefest.

Every bar mitzvah is a celebration. This one was a lovefest. The hall hummed with a palpable joy, yet fell reverentially silent when Bluma and Steve’s son gave his speech. He reflected on the Talmudic sage Elisha, who spurned his faith after seeing a boy climb a ladder at his father's behest to shoo away a mother bird before taking her eggs – fulfilling two biblical commandments guaranteeing a long life – only to lose his footing and die.

"Elisha decided that if this kind of thing could happen, then there was no God," the bar mitzvah boy asserted. "But the Talmud saw things differently: The tragedy wasn't caused by a flaw in God. It was caused by a shaky ladder."

He paused for a moment. "Now anyone who knows our family knows that we, too, started out with a shaky ladder. When my mother had a stroke shortly after my parents were married, it wasn’t at all clear that they'd be able to thrive, or to have me or my sister. However, my family had one definite advantage. Yes, we had a shaky ladder. But we also had a lot of people holding onto our ladder so it wouldn’t fall. And of course, that includes many of you who are here today.”

As I heard these words, I found myself thinking, Yes, and now Bluma and Steve are holding onto their beautiful children’s ladder.

Reliving our first encounter on the sidewalks of New York, I relived the battle we both fought and won: to become mothers when some may have considered it an elusive, unattainable dream. As I marveled at the economy of Bluma's words, her simultaneously tremulous and unwavering voice, I realized for the first time: Not only had she gotten her baby. I had gotten a sister.

My Mom Has Dementia, and I Have Her Jewish Faith
Vayelech 5783: Regret and Repent
Rabbi Sacks: Focus On the Important, Not the Urgent
Put Your Foot Down: Are Human Feet Poorly Designed?
Comments
MOST POPULAR IN Family
Our privacy policy
Aish.com Is Looking for Great Writers