A Picture of Life 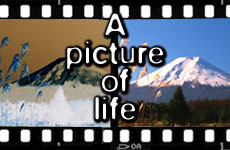 The present has become an elaborate excuse to take a picture for the future.

A guest tripped over the sprawling wires of the video camera; the rabbi was pushed aside by the photographer; a tank-like video monitor cut through the crowd like a snowplow. Then, when several people left the hall in a daze, blinded by the lights, I rebelled. The filming of the affair was so invasive, so obtrusive and interfering, that I swore I would never subject guests of mine to such treatment.

This was no longer a simcha [celebration] whose essence you attempted to capture on film. It had, instead, become a performance. The goal was to stage the affair so that a film could be created for posterity. Everything else -- the ceremony, the family, the guests, the dancing -- was secondary to the staging and photographing. It was not my cup of tea.

It did, however, convince me of something I had long suspected. We are all suffering from an insidious cultural disease I shall call Detachment. Our world seems to be so fractured and severed from its Source, that we can no longer savor each precious moment. The present has become an elaborate excuse to take a picture for the future.

The continuous clicking of shutters pierced the icy Alpine air.

Every year, hordes of visitors flow in and out of the world's tourist centers. One summer, at the top of the Schilthorn in Switzerland, a breathtaking white world was spread out beneath us. But no one was looking at the mountains. Our fellow tourists were all busy looking into their cameras. The continuous clicking of shutters pierced the icy Alpine air.

It was a doorway to Heaven, a place to contemplate and meet the Creator. Unfortunately, He wasn't available to have His picture taken, so the visitors framed and focused on His snow-capped peaks. Later they would gape in admiration, not at God's handiwork ("How great are Thy works, O Lord!"), but at their own, as they relived their recorded experience ("Look at this great picture I took!"). I took a picture of all of the people taking pictures.

Why don't people concentrate on what they're seeing? Why don't they let their minds and hearts, and not only their cameras, record? It seems more fulfilling to savor a mountain in its magnificent, stony flesh, rather than on Kodak paper or videocassette. There's nothing wrong with taking pictures, but in this age of state-of-the-art instant photography, people tend to confuse viewing a photographic souvenir (or work of art, as the case may be) with experiencing the original. It just ain't so.

Then again, lots of things "ain't so." Or at least, ain't what they should be. Take automation. How can we feel anything but disoriented in a world where people are quickly becoming a scarce commodity? We deal on a daily basis with machines as though they were people, and with people as though they were machines. An article in a financial magazine stated that only the really rich can afford people as servants nowadays. Everyone else gets a machine. Human bank tellers, for example, are often reserved for customers with large accounts. The rest of us get to use the automatic teller.

Or try filling your tank with gas at a self-service station. Once, when my husband and I stopped at such a gas station, we couldn't figure out how to start the gas pump. We finally left and cruised around, searching for a service station with a live worker. Nowadays, if you can't manage a machine, you're in danger of being stranded forever.

A simple telephone call is another contemporary hazard. In nine calls out of ten, a recorded voice answers. Even if it's a pleasant voice, it's difficult to carry on a satisfactory conversation with a recording. It's confusing too. I place a call and get a message. But I don't want a message. I want information. If I'm requested to dial further numbers for my information, I'm answered by another machine. Sometimes I'm instructed to speak to a machine as if it were a live person.

Question: Should one be serious, factual, friendly, or funny when speaking to a machine? "How are your nuts and bolts today? Did you replace those faulty chips, the ones that knocked you out of commission last week?" Or should one answer back in kind -- in an atonal, fake-friendly, computerized voice? I am waiting for the day when answering machines will speak to each other. I often try to imagine the strange, otherworldly conversations which will ensue. Sometimes it gives me the creeps.

It is demeaning to prefer an automated tollgate to a live person, created in the Divine Image.

Rabbi Moshe Feinstein once directed his driver to go through the tollgate which had a human attendant because it was demeaning to the man to prefer an automated tollgate to a live person, created in the Divine Image. I'm with Rabbi Feinstein all the way. Even if it takes a few seconds longer.

The most startling display of automation I've ever encountered was in the basement of a large building in downtown Chicago. At first glance, it looked like a combination bomb shelter, abandoned vault for safety deposit boxes, and morgue. It turned out to be a post office with a staff bereft of human life. It held scores of multi-shaped machines which, for a stipulated sum, would disgorge a variety of stamps, forms, envelopes and other postal miscellanea. I hurried past them, as if confronted by creatures from another world.

Perhaps my shell shock was a result of where I'm coming from. In Israel, the post office is definitely a creature of this world. I think there is not a post office in the country without its own particular character, flavor, way of doing things, heroes, ogres, annoyances, and charms. I wouldn't have it any other way. Humanity adds color and warmth and flavor to one's day. An Israeli post office helps me remember that it's people -- not machines -- who keep the world, and the mail, going 'round.

God's world of nature, unlike man's inventions, is a great, flowing creation. Everything is interconnected; everything has its place. Nothing is wasted or spoiled. A river begins at a point where water comes forth from the earth and continues flowing until it seeps back into the ground or meets the sea. A mountain rises up from the bowels of the earth and lifts its head to the sky. The stars are always there, moving in a constant celestial circle across the arched heavens. Even a flimsy, tenuous, ever-changing wisp of cloud is continuously absorbing and losing moisture as it wings its way up from oceans and earth only to return as drops of rain.

Everything began somewhere, moves, changes, gathers force, coalesces and continues on, forming material for something else, in ever wonderful, ever old, ever new forms.

But when we slice life up into individual moments and pieces, we still the movement and cut the threads. And of course, when we concentrate on making a copy of life and compartmentalizing it, no matter how perfect the copy, no matter how neat the compartment, we have lost the power, the force, the energizing vitality of the original.

That's why I prefer the scent of live flowers to an aerosol spray; a live concert to a Compact Disc; a live sunset with the wind in my face, the smell of seawater in my nostrils and grains of sand between my toes to a superb video of the same scene. I also prefer fresh air-to-air conditioning, and fresh orange juice to the canned, concentrated, and frozen kind -- even if the fresh juice contains a few seeds.

I'm not a nature freak or an anti-civilization nut. It's just that living as I do in the city, I often feel cut off from the nourishing quality of God's world as He made it to be felt and smelled, seen and heard. One Rosh Chodesh night, during a drive through Israel's sparsely populated southern Negev, we were treated to a magnificent, celestial display. The dark, moonless, open sky was alight with a zrillion stars. It was the kind of sky Abraham must have seen when God promised him children "as numerous as the stars in the sky." It was humbling, awesome, inspiring. It evoked prayer. And most city-dwellers today can live an entire lifetime and never once see it.

The modern world has lost touch with the Divine. We no longer experience firsthand the enormity of God's power in each and every mundane little thing. Man has seemingly tamed the world and brought it under control. Bread? It's only two minutes away, nicely wrapped, in the frozen-food section in the supermarket, as cheap as cheap can be. What's the big deal?

Water, that life-sustaining liquid without which nothing exists? Just turn on the faucet. Snow? Something to be shoveled. Rain? A pain in the neck. Mountains? Nice to look at but nothing I'd want in the neighborhood. Too hard on the transmission. The ocean? I prefer a swimming pool; no waves, no salt. Etcetera.

We've eased ourselves onto the road of comfort and in the process, we've lost sight of that Prime, Moving Force, the One Who is truly in control. We pray to Him endlessly, but in a sort of detached way: we don't live, see, hear, smell, feel, fear or stand in awe of His Presence the way they used to in the old days. Nowadays, we take a picture.

An excerpt from Yaffa Ganz's book "Cinnamon and Myrrh" (Feldheim)

Who Needs “Denazification”?
Don’t Believe in Other Gods Versus God is One
Seeing Without Eyes
Why Shouldn’t We Eat Whatever We Want?
Comments
MOST POPULAR IN Current Issues
Our privacy policy
Aish.com Is Looking for Great Writers