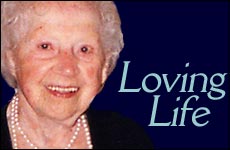 My great-grandma Bertha was amazing for many reasons, and not just because she lived life to the fullest for 106 years.

My great-grandmother, Bertha Kurz, passed away this year. She was 106 years old. She was amazing for many reasons, not just because she lived to be one of the oldest women in the United States. Think of what she experienced in her lifetime. Who could possibly be a worldlier, wiser, not to mention resilient woman than great-grandma Bertha who tenderly touched three centuries?

Bertha's mother was Lena Haft, a Russian immigrant who lost her husband in the Spanish-American War at the age of 27. She lived a poverty-stricken life as a cigarette roller in the "Jewish ghetto" of Brooklyn. Lena had five children, one of whom died at birth. Bertha was born in 1897. Because my great-great-grandmother could not support her four children, she orphaned two of Bertha's siblings. Unfortunately Bertha was born deaf, probably due to the German measles her mother contracted during her pregnancy.

Life was brutal for this poor, deaf Jewish teenager, but great-grandma Bertha was not about to let this bleak upbringing get the best of her.

Great-grandma Bertha was sent to the Lexington School for the Deaf, for both economic and education reasons. Bertha's sister died in an influenza epidemic and a year later her mother was bedridden with a severe case of scarlet fever. Life was brutal for this poor, deaf Jewish teenager, but great-grandma Bertha was not about to let this bleak upbringing get the best of her.

She graduated from the Lexington School in the spring of 1913 but because of her young age, the administrators kept her there an additional year before releasing her to be trained as a diamond cutter in the thriving business of one of the school's wealthy benefactors. This occupation provided her with barely enough money to purchase food and clothing and pay the rent.

When she was 19, Bertha married Harry Kurz, one of her classmates. A destitute sewing machine operator, he later became an insurance broker for deaf people. The young deaf couple struggled to make ends meet. They were both fluent in sign language and were able to maintain a loving relationship for over 60 years.

Great-grandma Bertha was a dynamic spirit and the driving force in their marriage. They had three children, all of whom had completely normal hearing. My grandfather described his upbringing: "We were extremely poor. Both of my parents were deaf so it was very difficult for them to find good jobs because most employers didn't want to hire disabled persons. My mother always looked out for her children. She made sure there was food on the table, even if she couldn't afford to eat herself. Bertha forced us to study hard because she wanted us to have the opportunity to live a life free of the plague of poverty. I'm so grateful that she was my mother. She made my childhood one of the happiest stages of my life."

According to my grandfather, great-grandma Bertha never complained about her hearing impairment. In a newspaper article celebrating her 105th birthday, the author writes, "Bertha Haft Kurz loves words and people even though she's never been able to hear them."

Her beaming smile was "contagious," my grandfather said, and she made a host of lifelong friends. She maintained close relationships with many of the children and grandchildren of her Lexington School classmates. Even when traveling by plane, Bertha's amiable personality attracted the passengers sitting nearby. One of her closest friends was a 68-year-old man whom she met on a flight to Orlando.

Bertha hated to miss any family event. When my father was 17, she told him that he had to hurry and get married so she could be at the wedding -- that was 35 years ago! "I'm surprised I've lived this long, but I have a love for people," she said on her last birthday.

In 1998 she received the RBS Hirsch Woman of the Year award: "This gentle woman has been active all of her life in observing Jewish rituals and traditions, serving the Jewish, deaf, and entire community from the east coast to the west coast with 100 years of wisdom."

Bertha had a passion for reading and writing, two activities she could excel in despite being deaf. She read two newspapers a day, though her real love was the crossword puzzles. She completed the New York Times crossword puzzle nearly every day for 87 years -- that would amount to more than 20,000 puzzles in her lifetime!

Over the past 17 years on every November 2, great-grandma Berth would send me a handwritten card wishing me a happy birthday, accompanied by a check for $2.00, the same amount my dad received when he was younger -- no adjustment for inflation! Even more incredible, her message continued for two full pages. Her letters included witty aphorisms, humorous anecdotes, and of course a "good luck in school this year and with your tennis game." Not only did she remember all of our birthdays every year, my Uncle Steven received a card just 48 hours before she passed away.

A few weeks after her 50th birthday, great-grandma Bertha received astounding news from her doctor: the recent invention of the cochlear implant would enable her to regain her hearing. A dream come true! The doctor wanted to confirm that Bertha would undergo this simple procedure. "Bertha, clearly you would like to undergo this minor surgery and receive the implant, right?"

"Actually doctor, I think I'll pass, though I appreciate the offer very much."

"Simple, I'm afraid I'd lose all my friends."

Her secret to happiness was "I don't worry about things, I keep my mouth shut and mind my own business."

Great-grandma Berth loved her life and did not see her hearing impairment as a disability. She couldn't imagine her life getting any better and was afraid that being able to hear would place a barrier between herself and her friends instead of removing one. Throughout all her life she maintained a vitality and heartiness that nothing could diminish.

"Her deafness never deterred her from communicating with anyone," my grandfather said in his eulogy. "Her adventurous spirit was indomitable and she prevailed in any situation. She prized love, honor and integrity above all else and she inspired the same in others. We began to think she was indestructible, but, alas, she grew weary and finally bid us all a fond, fond farewell."

What I remember best about my great-grandmother were my visits to her apartment in Queens. Although I was only one of her 13 great-grandchildren, I always felt that I had a relationship with her. Her secret to happiness was "I don't worry about things, I keep my mouth shut and mind my own business."

For inspiration, in my wallet I keep a photograph of great-grandma Bertha, sitting upright and tall (well, she was actually only 4'8"!) with a gleaming smile on her face. I can always feel her looking down on me from above.

Zach Kurz is a senior at the Horace Mann School in Riverdale, NY and will be attending Princeton University in the fall. He is a highly-accomplished national and regional junior tennis player, ranked in the top 1% of his high school class, and earned the designation of National Merit Scholar.

My Journey in the Holy Land

Faithful Soldier: Remembering My Beloved Father, Rabbi Melvin I. Burg
Korach 5782: Visit to Lift the Spirit
That Time The Ivy League Found A Way To Limit Jewish Enrollment
Would You Rather Be Right or Happy?
Comments
MOST POPULAR IN Spirituality
Our privacy policy