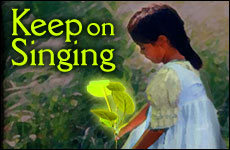 Look carefully at the quiet miracles happening all around you.

A few weeks ago, my three-year-old daughter, Julia, and I went to our local farmers market on "Earth Day," where they had added environmental booths and exhibits. Already maternal, Julia ran to the booth giving out baby trees, thrilled to have her own "baby" to care for. The entire way home she cradled and rocked the tiny plastic pot containing her tree clipping and the Ziploc full of compost. We discussed how we would plant it and with water, sun and a lot of love, like a miracle, the tiny plant would grow into her big, tall tree.

After much thought, Julia chose the perfect spot in our backyard for her baby, and we planted it. Dwarfed by the other plants and even the tall grass, her clipping slumped anemically to the side, but Julia didn't seem to notice.

Her tiny little voice lingered above the garden, its song expectant and hopeful, a prayer for something extraordinary to happen.

Throughout the day, she sat by her tree, and sang softly to it, caressing it lovingly. Her tiny little voice lingered above the garden, its song expectant and hopeful, a prayer for something extraordinary to happen. For some reason, the ethereal quality of her voice reminded me of a patient my colleague had last winter.

Typically, because I am only on call for my internal medicine group once every four weeks, I don't get to know my colleague's patients that well, but Mr. Schreiber was different. Everyone in our office heard about him. Visiting from New York for the birth of his granddaughter, he had a massive heart attack. While in surgery to repair the damaged vessels, he had another heart attack, clinically died and was revived. When I saw him that weekend, he was on full life support, awaiting a heart transplant -- his only chance for survival.

Before I went in to his room, I reviewed his chart so I knew what to expect (he had over ten different specialists), but I never got used to seeing it. A ventilator pushed air into his lungs, an intra-aortic balloon pump enabled his severely damaged heart to function just a little, multiple IV's delivered medicines to his veins, and even then his situation was extremely precarious and not sustainable for long. Dwarfed by all of these machines, he appeared shriveled and gray; his glazed eyes stared listlessly at the ceiling.

Most of his body was covered with bandages and tubing, but his wife, an elegant, well dressed woman in her early 60's, didn't seem to notice. Her face etched with shock and disbelief, she sat by his side, absently caressing the two small fingers on his left hand not used for IV's, and softly sang. Somehow her thin, tired voice resonated above the beeping and whirring of the machines -- its song terrified and longing -- a prayer, a plea, for something extraordinary to happen.

As I went into her room to introduce myself, she was startled out of her reverie.

"Oh, I'm sorry. I'm so jumpy," she choked. "It's been quite a week." Though tears filled her eyes, she took a deep breath, determined to be strong.

"And now they're telling me we're 'lucky,'" she continued, her voice tinged with irony. "We are more likely to get a heart in the winter in California because people can ride motorcycles all year round." Then she shuddered as she realized how macabre that sounded.

"He was my high school sweetheart… we've been married over 40 years." As she looked at her husband, her voice broke and the tears came. "He just retired. These were our years to travel and see family."

I sat with her and noticed a picture taped to the bed rail. The tan, handsome man holding an infant appeared to glow with vibrancy and strength. He did not at all resemble the shrunken shell wheezing in the bed, but it was Mr. Schreiber just three days earlier.

I searched his eyes in the picture for any darkness of foreshadowing, any hint of recognition that a few hours later his life was to drastically change, but there was none. They were lit up with the incredible joy that after three sons and four grandsons, he finally had his little girl.

"Little baby Kayla," his wife said wistfully. "She's why we're here. We're so used to coming out for a bris a week later, but we got to even come to the hospital when she was born this time. A little girl in our family -- it's like a miracle."

What an unfair trade, I thought, as I glanced at Mr. Schreiber, now struggling against the ventilator. After I gave the nurse the order for more sedation, I said to Mrs. Schreiber, with feigned brightness, "Well, you're in one of the best hospitals in the country, with one of the best transplant teams. I've seen people up and walking one week after their transplant." I gave her a hug. I was not at all convinced, though. The truth is many people far younger and less sick die while waiting for a transplant.

With a forced smile I said, "I'll see him next time with a new heart," and left.

He was lucky, I guess. A few days later he got his heart. A few days after that, however, it looked as if he was rejecting it and was taken back to surgery where, though the new heart was kept in, he had a minor stroke.

It was four weeks until I saw Mrs. Schreiber again. The shock on her face was now replaced by fatigue, her strength almost gone. Though Mr. Schreiber appeared to be improving and was in a lower intensity unit, it had been a tough month: he had been in and out of the ICU with infections, blood clots, and low blood pressure. She was still quietly singing, but now her voice held resignation and grief. As I looked at Mr. Schreiber, I could tell why. Much thinner than previously, his sunken eyes looked vacantly at the wall. In striking contrast to a new picture of baby Kayla, who, at one month, had full, rosy cheeks and sparkling eyes, his face was gaunt and gray, his eyes distant.

"I don't know what to do", his wife whispered. "They want him to start eating and are working with him to walk, but he refuses." Then to him, in a fake sing song voice, "Honey, remember Dr. Yaris? She says you have to eat and walk."

With great effort he turned to look at me. The despair in his eyes made it obvious to me he did not at all believe what I was saying.

It was imperative that he make the choice to rehabilitate, however painful and arduous it was. Only he could determine his recovery. He could only get it from within; our facade of cheerfulness could not give him what he needed.

As Kayla grew and embraced life, her grandfather shriveled and retreated.

Unfortunately, he didn't make that choice. Over the next few months he was in and out of the acute care hospital with pneumonia and diabetes. Each time, back in rehab, he would eat a few bites, walk a few steps and then refuse. He was given the diagnosis of "failure to thrive" -- medical parlance for "loss of will to live," and started on anti-depressants, but nothing helped. Each month I would visit them, and his wife would be singing, but her voice was becoming detached, her song distant. A new picture of Kayla appeared on the wall each month. As she grew and embraced life, her grandfather shriveled and retreated.

As I went towards his room for my sixth monthly visit, I heard Mrs. Schreiber's voice -- hopeful and strong. Maybe he had decided to try! But when I walked in I realized she was singing to baby Kayla, snuggled in her arms.

"They made an exception and allowed Kayla to come in. We are going home in a few days. We have no reason to be here."

She was right; he was probably as stable as he ever was going to be. As I looked at the thin, motionless figure on the bed I wondered, "Although it is miraculous that medical science has advanced so far that we can transplant hearts, is this a miracle?"

I went over to him and squeezed his hand. "Good luck, Mr. Schreiber," I whispered. He didn't even turn his head as he barely mustered a nod. As I was hugging his wife goodbye, I prayed that somehow he would again find joy.

They went back to New York, more than six months after they first came, not a triumphant march, but a limping straggle. After that, I didn't think about them.

Until a few days ago.

A little girl came bounding into our office. She looked familiar, but I couldn't quite place her. Then, I remembered -- it was baby Kayla, now an energetic toddler. I got chills when I realized who she was dragging behind her: Mr. Schreiber! Tan, strong, and smiling, he boomed, "We just went sailing."

Tears came to my eyes as I had watched Kayla, completely oblivious to the role her birth location and time played in any of this, climb into his arms. She giggled as she bopped his nose and he stuck his tongue out. To her, he was not a transplant recipient, a success story, or even a miracle; to her he was just "grandpa".

Just then, my thoughts were interrupted as my own little girl, Julia, came bounding in.

"Mama," she said sadly, "nothing special is happening. I've been singing and singing and my baby isn't growing into a big tree. It's not even growing at all. There is no miracle."

I looked at her and thought of Mr. Schreiber. "You know what, sweetheart. Sometimes miracles are so slow, quiet and soft that you can't even tell they're happening. But if you look very carefully, you can see that they are happening all around you. Just keep on singing, my love, keep on singing."

Growing Up Sisters
Chukat 5782: Let’s Play the Blame Game!
The Sin of Moses: The Two Ways to Communicate
In Aftermath of Chicago’s July 4th Shooting, Local Moms Provide Countless Points of Light
Comments
MOST POPULAR IN Spirituality
Our privacy policy