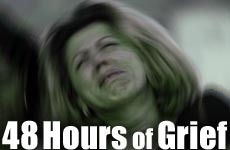 Some of those lost in the recent terror spasm.

Twelve Israelis were killed, and dozens injured, in five suicide bombings in 48 hours starting last Saturday night with an attack in Hebron. The bombings, which began just after the release of the "road map" for Israel-Palestinian peace, also occurred in the Jerusalem neighborhood of French Hill and on Monday at a mall in the northern town of Afula.

Here are some of the stories of the victims, compiled from the Israeli papers and the Israeli government.

Olga Brenner, 52, emigrated from Moldavia six years ago with her daughter, Svetlana, 27. They had cleaning jobs at two different addresses but would travel together to and from work each day on the pre-dawn bus filled with blue-collar workers. On Sunday, as the Egged No. 6 bus wound through French Hill, the suicide bomber detonated his explosives at 5:45 a.m. Seven were killed. Svetlana watched the bomb blow off her mother,s head, but Svetlana lived, although she was severely injured with shrapnel in her head. Twenty people were wounded in the bombing.

Shimon Ustinsky, 68, also killed on the No. 6 bus, was on his way to work as a parking garage attendant in Jerusalem,s Old City. Shimon, who emigrated from Ukraine in 1991, held a degree in economics and had been a lecturer in Kiev, but said he did not mind engaging in manual labor in Israel. He was happy and enjoyed traveling throughout the country. Shimon is survived by his wife, two children and two grandchildren. He was buried in Jerusalem.

Marina Tsahivershvili, 44, another victim from the No. 6 bus, emigrated seven years ago from Georgia. She was remembered as "a very dedicated and responsible kitchen worker" at Shaare Zedek Hospital, where she prepared breakfast for children and the various clinics. Marina was remembered as a kind woman, always willing to volunteer, and among the first to offer help following previous terror attacks in Jerusalem. Shaare Zedek,s administrator, Yonaton Levy, eulogized her, saying, "We lost a dear woman." She is survived by her mother, sister and two nieces. Her father died two months ago.

Yitzchak Moyal, 64, left his Pisgat Zeev community on the No. 6 bus on his way to his job in a post office. His oldest son, Sharon, was a bus driver on a different line. Sharon and his siblings were searching the hospitals for their father after the terror attack when they were called to the Forensic Institute, where they saw their father in death, his body intact. Sharon held his father,s limp hand and bent over to kiss him goodbye on his forehead. Yitzchak was buried in Jerusalem by his wife of 40 years and their six children and grandchildren.

Dina Esther Levy, 37, of Kiryat Arba, was killed Saturday night by a suicide bomber while walking with her husband, Gadi, in Hebron. Israeli soldiers were alarmed by the behavior of the bomber, ordered him to halt, but the Hamas terrorist quickly detonated his explosion near the first people he encountered -- the Levys. Gadi died at the scene. Dina, who was pregnant, died after arriving at Hadassah Hospital. Gadi and Dina were married about 18 months ago, Gadi,s third marriage and Dina's second. Dina had two children from her previous marriage, and friends said they dreamed of having a child together. Dina was buried in Jerusalem. She is survived by her children, aged 10 and 11.

Gadi Levy, 31, worked in a supermarket. His boss, Rafael Avitan, said: "We all attended their wedding at the Jerusalem Rabbinate and celebrated. Gadi was a special person, very dedicated to his wife and mother and always willing to help anyone who needed assistance. He was a very special person. He wanted so much to be a father. He loved children." Gadi was buried in Holon.

Reprinted from the Jewish Week

The Professor and the Baby