The Jewish Ethicist: Was this Stolen? 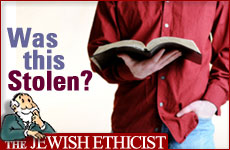 Q. I bought a book through an on-line bookstore and it says inside it belongs to a well-known yeshiva. I contacted the yeshiva and they confirmed that it belongs to them. What do I do?

A. In general, the rule in Torah law is that anytime an object makes its way into our hands, we have an obligation to return it to the owner. The Torah commands this return in two places:

If you encounter the ox of [even] your enemy, or his ass, straying in the way, surely return it to him. (Exodus 23:4)

Don't see your brother's ox, or his sheep, straying and ignore them; surely return them to your brother. (Deuteronomy 22:1)

From the point of view of the original Torah law, there is really no difference how the lost object made it into your hands. If it was lost and you can identify the owner, you have to take steps to return the object. (As we explained in previous columns, you are not required to incur net expenses to do so.)

However, Jewish law, just like civil law, makes certain provisions for objects obtained in good faith in an open marketplace. The Talmudic sages made a regulation known as "rectification of the market" (takanat hashuk) that enables a person to recover lost property yet prevents a person from suffering a loss if he makes a purchase in good faith. Good faith means that he did not know, and had no reason to know, that the merchandise was stolen. They were worried that if inadvertently buying a stolen object would result in a total loss, people would be reluctant to buy and general commerce would suffer.

In this case, the buyer still has to fulfill the commandment of returning the lost object, but the original owner has to reimburse him for the price of his purchase (assuming it is a fair market price). Any legal action against the thief will be taken by the original owner, who is left with a monetary loss.(1)

The logic behind requiring the payment is to encourage market activity; the logic behind the return is that the original owner values the object particularly highly. There are many different justifications for this idea. From an economic standpoint, we would say that the fact that the original owner refrained from selling the object even though he could have obtained the same price as the thief proves that he values it more highly than the thief did and more than we know the purchaser does. From a psychological point of view, we know that people develop an attachment to their property over time. There is also a spiritual element that until ownership is uprooted we view a special providential connection between a person and his possession.

This rule is subject to various conditions. First of all, if the original owner can be assumed to have given up hope of ever recovering the object, the subsequent owner may obtain full ownership, what is sometimes known in secular law as "clear title". Second of all, the acquisition must really be in good faith. If the site, or the particular vendor, involved have a shady reputation which you could have verified, this condition may not hold. If you had reason for suspicion you may be obligated simply to return the book. Finally, what we just explained is the Jewish law approach. There may be various secular laws and regulations which would change the picture. Since this column does not discuss issues of secular law, we cannot even relate to these.

Note that actual application of takanat hashuk in your case would be problematic. In your case we are discussing a standard object. The book that you obtained is exactly identical to another copy the yeshiva would obtain. It is true that a private individual develops a special attachment to his books, and particularly to religious books, and probably most people would be very reluctant to trade their familiar prayer books for a new and "better" one. But this consideration rarely applies to an institution such as a yeshiva.

In other words, the yeshiva would probably find the prospect of receiving your copy of the book and returning you the money very unattractive. It is probably better for both of you if the book remains in your hands, though you should certainly notify them and give them the option. The yeshiva will probably want to obtain from you the contact details of the seller so that they can try and obtain recompense from him. Even if the book was taken inadvertently, the taker still has to return it to the original owner. That is the essence of the mitzvah to return lost objects.

According to Jewish law, you should offer to return the book to the yeshiva and obtain recompense, but probably they will be more interested in the contact details of the seller so that they can try to recover the value of the book.

The Jewish Ethicist: Ethics of Being Overweight

The Jewish Ethicist - Forgiving and Forgetting to Ourselves