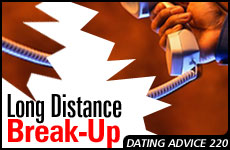 After a few months of distance dating, she's hesitant to end things on the phone.

I have been dating a man for a few months now. We live in different states, so our manner of dating hasn't been very conducive to building a courtship. I do enjoy his company when we are together, but because we don't see each other often, every time we do it feels like we are starting again. And I hate the constant doubts in my mind while we are apart.

He is a great person, with a lot of the qualities I am looking for in a spouse, but I don't feel like I have an 'emotional connection' with him, even though it has been a while since we started going out. I gave it a lot of time because I believed there was potential, but at this point I just can't see myself marrying him.

I feel awful that it took me so long to finally realize that I don't want to continue seeing him. I know it is really wrong of me not to tell him how I feel, but I am hesitant to do so over the phone. Do you have any suggestions or advice as to how you think I should proceed?

Ending a courtship is never easy, because we want to cause as little hurt as possible to another person. However, when it is inevitable, as your upcoming break-up seems to be, it is best for both people to do it sooner rather than later.

It's understandable that you would prefer to break the news in person, because you think it is more personal. However, given the fact that you would have to travel some distance in order to see each other, it may be fairer to tell him over the telephone. Why should he anticipate your time together and travel to see you, only to be severely disappointed and have to face a lonely and depressing trip home? Or why should you have to travel to see him, dreading what you are going to say to him, and then enduring a guilt-ridden trip back?

Now let's talk about what is the best way to break the news. It should be done in a considerate, concise and clear way. You must convey clearly that your courtship is over and you do not wish to resurrect it. We're concerned that because you feel guilty about the time it has taken you to come to this decision, you might vacillate about what you have to say and not convey a clear message.

What should you say? Try this: "Over the past several weeks, I've done a lot of thinking. I think that you are a very special guy, but I realize that our courtship isn't moving in the direction I would like it to. I feel bad saying this, but we should stop seeing each other." Considerate, concise, and clear.

Don't try to soften the blow with a lengthy explanation of how hard you tried to make it work, what a wonderful person he is, or that if it weren't for the distance between you perhaps things would have been different. In addition, if you start to rationalize things, you may end up giving him false hope that if he made some changes, your relationship has a chance. Both of you should understand that this courtship simply didn't work out, and it is over.

There is no need to "feel awful." You saw potential in your courtship and did your best to pursue the possibilities. The fact that you ultimately decided that notwithstanding all of his positive qualities, the two of you aren't right for each other, is something that happens to many people. Many of us date someone who is "almost the one," and it takes time to realize that he or she isn't Mr. or Ms. Right. You didn't spend an unreasonable amount of time coming to that realization. A few months isn't too long, especially since you didn't see each other often because of your long-distance courtship.

Often, when someone sees that there is no true "marriage potential," even though she likes and values the person she is dating, she tends to try harder to make things work. In our experience, if after a few more weeks she continues to be bothered by the same issues, and can't find a way to accept it or work it through, additional time isn't going to make a difference.

Some people "spin their wheels" for months (or years!), vainly trying to make things work. It seems to us that you realized what was happening at a relatively early point, and will spare everyone a lot of frustration if you break up now.

We'd also like you to give some thought to the fact that the "long-distance factor" is not the only reason this courtship hasn't worked out. It's true that it is hard to maintain momentum if you have to wait weeks between seeing each other. Even with that difficulty, however, if the two of you were right for each other, you would have at least gotten a sense that you were connecting, and may have tried to engineer opportunities to spend more time together, or shorter periods apart, to allow momentum to develop. Further, your e-mails and phone calls to each other would have helped the connection develop further. (Many long distance relationships succeed in this manner.)

Break-ups often come with the territory of dating, and your decision to break up now is a reasonable and timely one. So, give yourself a pep talk and muster up the courage to end your courtship. The reality is that he'll be hurt and you'll be sad, no matter what you say. But before you know it, each of you will be able to move forward and find the person who is really right for you.

Dating Maze #251 -Pre-Marital Counseling
Vayelech 5783: Regret and Repent
Rabbi Sacks: Focus On the Important, Not the Urgent
Put Your Foot Down: Are Human Feet Poorly Designed?
Comments
MOST POPULAR IN Dating
Our privacy policy
Aish.com Is Looking for Great Writers