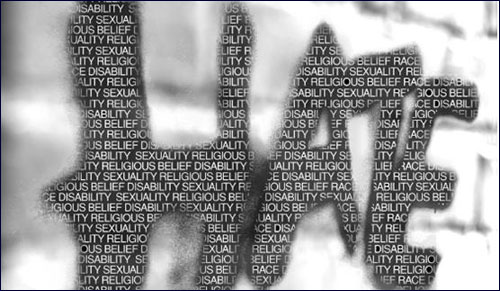 Jewish students face ongoing anti-Semitism and no one is doing anything about it.

On the stage the American flag rippled in the dim spotlights alongside the Israeli flag, and I thought about the refuge that this country has been for so many Jews. My grandmother used to tell the Santa Claus who offered us candy canes at the mall: "No thank you. We're Jewish so we celebrate Hanukkah. But happy holidays!" I'll never forget the way her green eyes lit up with her fiery pride for Judaism. As her granddaughter, I grew up believing that being Jewish was a gift, and that anti-Semitism was an archaic form of ignorance that lay far away in mid-century Europe.

Unfortunately last week’s headline in the New York Times, "Swastikas, Slurs and Torment in Town's Schools" shows that virulent hatred still simmers right here. In the Pine Bush Central School District in New York State, located 90 minutes north of New York City, going to school has been a nightmare for Jewish students. Swastikas have been found on walls, desks, lockers, textbooks, computer screens, a playground slide and, in an especially horrifying incident, scrawled onto a Jewish student's face. Three Jewish families are suing the district and its administrators in federal court for flagrant anti-Semitism and the apathy of school officials.

In 2011, when a parent complained about the harassment of her daughter, the school superintendent, Philip G. Steinberg, wrote in an email: "I have said I will meet with your daughter and I will, but your expectations for changing inbred prejudice may be a bit unrealistic." The affected students’ grades have been dropping, and many of them have felt depressed and socially isolated. The swastikas that were carved onto school property were often accompanied by messages such as: "Die Jew." One of the students said that he stopped reporting swastikas to teachers because no one was doing anything about them.

The school superintendent said that he found the situation especially challenging because there were so many students accused of anti-Semitic behavior. When a NYT reporter visited the town and asked its citizens if they were aware of the swastikas and incidents, one man said: "We don't want them (Jews) in our town. They can't drive, for number one, and they already have Sullivan County. Who really wants them here? They don't belong here."

The families say that their discussions with school officials were fruitless, and that they were not informed that other families had raised similar issues. A father once asked an assistant principal why his son was disciplined for defending himself against a student who had grabbed him after teasing him about the Holocaust. The school official answered: "We have a zero-tolerance policy for fighting." The Jewish students have had coins thrown at them, been told to retrieve money from garbage cans and have been shoved and beaten.

The parents who have lodged complaints have been asked by the superintendent why they are still living in a community with such a level of hatred for Jews. One frustrated mother answered: "In a better economy that might be nice (to leave), but I can't sell my house and move from here right now. Something needs to be taken care of at the school level."

Years ago, I heard Rav Noah Weinberg ztz"l repeat a powerful statement made by Rav Elazar Shach ztz"l: "If one man can kill six million Jews, then one man can save six million Jews." If one or two or even 30 ignorant people can shove and put down our fellow Jews right here in New York, then one or two or even 30 of us can uplift and support them. At the gates of Auschwitz, Rav Noah stood with a group of Jewish educators and said: "We're not serious. The Nazis were serious. They didn't stop improving their methods until they were operating at full efficiency. Just as the Nazis were motivated to destroy the Jewish people, we have to be motivated to build the Jewish people."

The worst thing that we can do when we hear about a horrific story like this is nothing. The Jewish families in this rural town should not feel like they are on their own. They're not. I think of the light in my grandmother's eyes. I think of the empty seats at that Holocaust assembly so long ago. And I know, now more than ever, what a gift it is not only to be Jewish but to be proud of who we are. The courage and strength of these families in Pine Bush is an example for all of us. Let's stand by their side.

Please write a comment of support below. They will be forwarded to the Jewish families in the Pine Bush case.

Intellectual Honesty
Faith: the Axis Upon Which the Wheel of Science Turns
Love - Not Just About Chemicals Anymore!
Is There a Moral Code in a Virtual World?
Comments
MOST POPULAR IN Israel
Our privacy policy