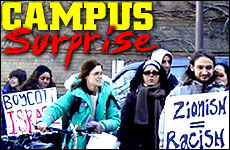 by Professor Jonathan Adelman
May 9, 2009

At a growing number of university campuses, ignorant and hostile anti-Israel sentiment has become the lingua franca of an influential chattering class.

When Jewish parents take their children to university campuses this fall, those who have not set foot on a quad from the 1960's through 1980's may be in for an unpleasant surprise.

It's not that they'll face an open barrage of anti-Semitism or even virulent anti-Israel displays. It's not even that most campuses exhibit the anti-Israel hostilities associated with San Francisco State University, Columbia University, the University of Colorado or Concordia University.

Still, for parents who haven't visited a campus for a while, what they experience will shock them. Since the outbreak of the second intifada in September 2000, American campuses have become incubators for a new kind of anti-Israel bias, one that leaves a large number of Jewish students feeling uneasy and unwelcome. In place of the open arms that once embraced Jewish students, parents visiting campuses today may be taken aback by the strong support of professors and students for the Palestinian cause and the anti-Israel rhetoric (occasionally sliding into anti-Semitism) espoused by those teaching and studying in Middle Eastern studies departments. Sadly, at a growing number of university campuses, glib, ignorant and hostile anti-Israel sentiment has become the lingua franca of an influential chattering class.

Why are American universities less welcoming to Jewish students?

In short, the national perception of Israel has undergone a radical transformation. Once viewed as a brave little country dominated by socialist kibbutzim and moshavim, a safe haven for thousands of Holocaust survivors who had no other home, Israel was once a hero state.

Israelis were viewed as fighting off Arab terrorists (many of whom had supported Nazi Germany), making the desert bloom and providing aid to the newly independent African countries. Much of the world applauded its great victories, especially in 1948 and 1967, against more powerful and threatening Arab enemies who denied its right to exist.

American campuses, which in many respects mirror a left-wing European worldview, have also transformed. Gone are the dominant, moderate, pro-Israel professors of the "greatest generation," who lived through the Great Depression, World War II, the Holocaust, the birth of Israel, and the Cold War. In their place are the children of the 1960's, the students who embraced the powerless and waged a cultural war for civil rights. By and large, their sentiments have not left them. The overwhelming majority of American college professors, especially in the social sciences and the humanities, feel a deep affinity with the Palestinians.

Jewish students are now seen very differently as well. Gone are the images of Jewish leadership on social issues. Now Jews are frequently seen as part of an old elite, struggling to defend the status quo. Nor are Jews any longer the academic elite. Asian students now dominate that field, and were aptly described as the "new Jews" by Nicholas Lemann in Slate magazine several years ago. At the same time, Jews, he wrote, have become the "new...Episcopalians."

Furthermore, the erosion of Jewish identity in the United States over the last 50 years has led to a concomitant decline in support for Israel. Intermarriage, unfortunately, has played a significant role. The 2000-2001 National Jewish Population Survey found that even among those students who identify as Jews (and many from intermarried families do not), almost half have only one Jewish parent. Significantly, when it comes to feelings about Israel, 36 percent of students with two Jewish parents said they were very emotionally attached to Israel, compared with 4 percent from one-Jewish-parent homes.

But should we be surprised? After all, for most of modern life, Jews were either barred or allowed only limited entry into universities. Indeed, it was only after World War II that quotas on Jews at universities began to lift. Prior to that, many top universities counted their Jews closely.

Tsarist Russian universities were all but foreign territory for Jews up to 1917 and most Jews were forced to travel to Switzerland or Western Europe for a higher education. And European universities in turn were often all but closed to Jewish faculty until after World War II. In fact, neither Einstein nor Freud could get a teaching appointment in German or Austrian universities.

But America was supposed to be different. For first generation American Jews, this country was the goldene medine. The dream of an American university education displaced the old, Eastern European ideal of a yeshiva education for children. For the great bulk of poorly educated, first generation Eastern European Jewish immigrants, struggling to make it in a world of discrimination, poverty and fierce competition, American universities remained remote and unattainable, a world only for the upscale WASPs.

For their children, however, it was a different story. Education was seen as the route out of the ghetto or small business or working-class job into the great American middle-class. Although most second generation Jews still attended public universities (city colleges and state universities), and not elite institutions, this generation achieved their desired entry into the mainstream.

And the Jewish dream came to be realized when, in the wake of World War II, the decline of anti-Semitism after the Holocaust, the G.I. Bill and the new emphasis on meritocracy (reflected in the widespread use of SAT tests), opened the door widely for most Jews in the 1950's and 1960's. Suddenly Jews streamed into all the elite universities.

I believe history will regard the period from 1950-2000 as a Golden Age of American Jewry, when Jews, only 2 percent of the U.S. population, formed 30 percent of the Ivy league population and moved up to occupy one-fourth to one-third of legal, medical, scientific, and academic positions in American society.

During this time Jews, often many of the best students on campus and the leaders in social movements (civil rights, anti-Vietnam War, feminism, environmentalism), seemed to be on the "right side" of campus issues.

What Is Being Done

Fortunately, not all is lost. While the Palestinian cause may hold sway on campuses, the majority of Americans (by a margin of three to one), support Israel, as does the great majority of Congress and the Bush administration. In the war against terror, Israel stands out front and center as part of the Western coalition against those who would threaten our fundamental liberties.

The greatest issues on campus, beyond the openly anti-Israeli rhetoric, are apathy and lack of knowledge

On campuses, which are subjected to many fads, the Palestinian cause is also losing its luster and has over the last few years given way to other issues-- Darfur, the war in Iraq and environmentalism among them. In addition, a number of national Jewish organizations have taken the lead in assisting Jewish students to organize in support of Israel on campus. So too have a number of major foundations, from the Shusterman Foundation to Heritage Legacy Foundation. And there are a number of Jewish academics, diplomats, lawyers and others who frequently lecture on college campuses in support of Israel.

The struggle over Israel on campus is not just a struggle about today. Rather, as a recent survey by pollster Frank Luntz found, the real issue is the discomfort that many future American leaders feel about Israel. Today's graduate students "at the finest graduate schools in America," writes Luntz in the introduction to his pamphlet America 2020: How the Next Generation Views Israel, "are turning against Israel in alarming numbers." A typical remark is that of a University of Chicago student who said: "Jews have a seriously negative influence on our policy in Israel-Palestine. With all of their money and power, they have succeeded in forcing our government to be involved in the Middle East." The anti- Israel sentiment reflected in the report could, in 20 years, transform itself into public policy reminiscent of the anti- Israel positions of the Eisenhower administration in the 1950's.

The mobilization of American Jewish organizations and foundations, the increasing involvement of Jewish parents and the roles taken by Jewish students on campus are positive harbingers of the future. Led by AIPAC and Hillel, American Jewish organizations ranging from Aish Hatorah and Chabad to AEPi and Scholars for Peace in the Middle East have united under the Israel on Campus Coalition to work for Israel on campuses across the country.

But the greatest issues on campus, beyond the openly anti-Israeli rhetoric, are apathy and lack of knowledge of the Middle East in particular and international affairs in general. In many ways, the shock felt on campus is a pale reflection of how Jews and Israel are perceived in the larger world. Future shock has come to the American campus.

This article originally appeared in The World Jewish Digest.

Professor Jonathan Adelman, who teaches at the Graduate School of International Studies at the University of Denver, has taught at Hebrew University and the University of Haifa. He is a frequent speaker on Israel, both on and off campus, for a number of major Jewish organizations, including AIPAC, UJC and JNF. 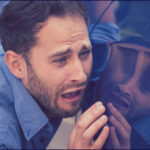 The First Scratch Is the Hardest3 min read 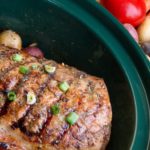 As the Flame Flickers6 min read