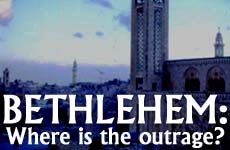 Palestinian gunmen occupy the Church of the Nativity, as Israeli troops keep watch outside. Who's crossed the line?

A visit to the Temple Mount in Jerusalem by Ariel Sharon was enough to kick off this second Palestinian war of terror on Israel known as the Intifada. Or so the legend goes. In fact, as even Palestinian Authority spokesman Imad Al-Faluji has stated on more than one occasion, Palestinian military action against the Jewish state was planned long before Mr. Sharon's "provocative visit" to Judaism's most holy site, which adjoins a site revered by Muslims as Haram-al-Sharif.

But imagine: If a mere day trip by Mr. Sharon into the vicinity of an Islamic holy site -- which, frankly, as Islamic sites go, ranks way below your Meccas and your Medinas -- could be considered reason enough to go to war, what about the armed Palestinian occupation, now into its second week, of one of Christianity's most sacred sites, the Church of the Nativity?

Needless to say, the seizure of the 1,677-year-old church by 250 guerrillas affiliated with Islamist terror factions has hardly roused the armies of Christendom. Crusades, Christian-soldiering and all that went out in the last millennium.

Still, it's a shock to realize that this desecration of the ancient church built over what's believed to be the birthplace of Jesus Christ has brought down neither Christian wrath nor international pressure on the desecrators to lay down their arms and leave. The closest thing to a meaningful call for action out of Rome, for instance, comes from Father David Jaeger, a Catholic spokesman, who said this week, "We appeal to the world to condemn this act and stop this behavior from continuing."

Father Jaeger's condemnation would be a good start -- only he was referring to Israeli troops, not the terrorists.

Father Jaeger's statement would be a good start -- only he was referring to the Israeli troops who have encircled the church, not the terrorists who have occupied it. Church officials, meanwhile, insist on styling the latter "refuge" seekers, but you could say only heaven knows why. They also insist that the Franciscan friars and nuns inside the church are not, emphatically not (perhaps too emphatically not), hostages.

This line is starting to wear thin as contradictory stories leak out of Bethlehem, including a Thursday report by UPI of a cell phone call made to German journalists from "a German" inside the church who said, "The Palestinians use us like human shields."

Occupier or guest, this band of sanctuary-seekers doesn't exactly call to mind a hunted herd of panting Bambis. According to the Israeli government, among those inside the church are notorious killers from Yasser Arafat's Fatah, Tazim and Hamas rosters. They include Ibrahim Musa Salem Abayat and Ismail Musa Muhammad Hamdan, two leading Tanzim operatives responsible for -- among multiple terrorist attacks -- the kidnapping and murder on Jan. 15 of Avi Boaz, a 72-year-old American citizen.

Also inside are Nidal Ahmad Isa Abu Gali'if and Muhammad Sa'id Attallah Salem, a pair of henchmen thought to be in on the March 29 suicide bombing at an Israeli supermarket that killed, among others, a 17-year-old girl out shopping for a Passover meal. There's a Fatah general-secretary named Kamel Hassan Hamid, who reports to the Palestinian Authority's Marwan Barghouti, and is said to be responsible for distributing funds to terrorist agents. Hamas is also represented by such operatives as Ibrahim Muhammad Salem Abyat, a chief organizer of the faction's terror operations.

In other words, Sunday school it ain't. No wonder Mr. Sharon told the Israeli Parliament he would "expect the international community to demand that they the terrorists lay down their arms and leave the holy place."

No official of church or state has demanded that Palestinians holed up over Christ's birthplace drop their weapons and leave the church.

But no. A strange hush hangs over the world, including the still-mainly Christian West. From the European Union to the Holy See, from the resolution-happy United Nations to the newly "involved" United States, no official of church or state has demanded that Mr. Arafat order the Palestinians holed up over Christ's birthplace to drop their arms and leave the church ASAP.

Very politely, Israel this week rejected the Vatican's idea of a solution, one that would have guaranteed all 250 terrorists safe passage to the Gaza Strip, where they would only re-arm and regroup -- and reattack. As Israeli President Moshe Katsav wrote the pope, "Under the circumstances, I regret with all respect and consideration we have for Christian Holy Places, we have no alternative but to prevent armed Palestinian terrorists, who have murdered innocent Jews, from escaping and continuing their acts of bloodshed."

Mr. Katsav might have also mentioned that the Vatican's solution would have turned sacred religious sites into sure-fire escape hatches, all but guaranteeing future seizures.

And so the stand-off continues, with surrender being the only solution to avoid a pitched battle. Whose surrender will it be -- terrorism's or civilization's? You would think -- you would hope -- that the world wouldn't want to stay quiet on this one.

The Denver Hair Stylist who Fought Against Anti-Semitism

When the Berlin Wall Came Tumbling Down

Marijuana and Judaism: What Does Jewish Law Say about the Subject?
The Miami Boys Choir is Taking over TikTok
Caramelized Onion and Pumpkin Pirozhki
For Every Individual, A Torah Scroll
Comments
MOST POPULAR IN Current Issues
Our privacy policy
Aish.com Is Looking for Great Writers