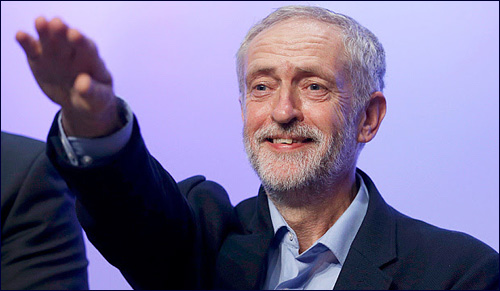 Revealing the root of the Labour party’s anti-Semitism.

Every time anyone thinks Britain's Labour party has reached a new low of anti-Semitism, entirely new depths seems to open. In September, I wrote here about how the election of Jeremy Corbyn to the leadership of the Labour party constituted a "mainstreaming" of racism in the UK. Although Mr. Corbyn claims he does not have any tolerance for any hatred of anyone, he is a man who has spent his political life cosying up to anti-Semites and terrorist groups that express genocidal intent against the Jewish people. He has worked closely with Holocaust deniers, praised anti-Semitic extremists and described Hamas and Hezbollah as his friends.

During his leadership so far, it is clear that the lead he is given is being followed farther down the party hierarchy. In March, I described how the party appeared to be rotting from the head down, with the discovery that the Labour Club at Oxford University had become an entity rife with anti-Semitic insults. Yet anyone who thought that the party could fall no farther had not imagined its turns of the past week.

At the start of the week, the MP for Bradford West, Naz Shah, was found to have posted on Facebook threads such ideas as the deportation of all the Jews from Israel over to America; the caption read, "problem solved." Elsewhere she wrote on a discussion thread, "The Jews are rallying." Ms. Shah happens to be a Muslim and represents a constituency which, until the last election, was represented by George Galloway. Other luminaries of the area include the former Liberal Democrat MP and David Ward.

So it is fair to say that among her peers, what Ms. Shah said was not unusual. The posts are from 2014, a year before she became an MP, and during the latest of Israel's engagements in Gaza. In her apology, once she was found out, Ms. Shah talked of the fact that it was period in which "feelings were running high." Of course, not everyone during a period of heightened feelings calls for the destruction of a UN member state, but Ms. Shah did, and within a day of the exposé of these messages, and an appropriate political outcry, she was suspended from the Labour party, pending a full investigation.

Labour's week had barely begun. Within hours, another Labour MP, Rupa Huq, tried to come to Ms. Shah's rescue. In a BBC interview, Ms. Huq tried to compare calls to eradicate the State of Israel with any other "amusing" thing one might find on Twitter. After a swift U-turn, Ms. Huq managed to restrain herself and remained in the party.

Next, from stage far-left, the former Mayor of London, Ken Livingstone, currently on Labour's National Executive Committee, made his intervention. Mr. Livingstone has been in the Labour party for almost five decades and in the same trenches as the party's current leader all of his political life. They have marched together for many a terrible cause and stood shoulder-to-shoulder on many a forsaken platform. But as Ken Livingstone went on several BBC programs, he probably did not expect that within hours, his own Labour party membership would be suspended, as was Ms. Shah's. Livingstone had used his media opportunities to start talking about Hitler – specifically to claim, that Zionism was an early policy of Hitler's. Perhaps sensing that he had got himself onto unfortunate ground, Livingstone then stressed that this was all before Hitler "went mad" and killed six million Jews.

So within a week, the Labour party leadership was forced to suspend one of its newest MPs and one of its oldest grandees – and both for the same reason. Presently, Jeremy Corbyn and his spinners are desperately trying to pretend that they have cut out the problem and are dealing with it appropriately. But there are reasons why they cannot do this with the problem that the Labour party – and the wider left in Europe and America – now has when it comes to Jews and the State of Israel.

Both Jeremy Corbyn and Ken Livingstone say that they condemn anti-Semitism. They always tend to add that they also condemn "Islamophobia and all other forms of racism," a disclaimer that always seems a deliberate attempt to hide a hatred of Jews under the skirts of any and all criticism of Islam. But doubtless on one level they believe it. What is most fascinating is that all the while they are saying this, they stoke the very thing they claim to condemn.

There was much outcry to one answer Ken Livingstone gave this week when he tried to excuse Naz Shah's original comments by saying that they were "over the top and rude." But it was what he said earlier and has so far gone uncommented upon that was far more revealing and points to the left's central problem here. In an earlier interview that morning with BBC London, Livingstone had said:

"The simple fact in all of this is that Naz made these comments at a time when there was another brutal Israeli attack on the Palestinians.

"And there's one stark fact that virtually no one in the British media ever reports, in almost all these conflicts the death toll is usually between 60 and 100 Palestinians killed for every Israeli. Now, any other country doing that would be accused of war crimes but it's like we have a double standard about the policies of the Israeli government."

That right there is what is at the centre of Labour's anti-Semitism problem. It pretends that the Jewish state does such things for no reason. There is no mention of the thousands of rockets that Hamas and other Islamist groups rain down on Israel from the Gaza Strip. The comment turns a highly-targeted set of retaliatory strikes by Israel against Hamas in the Gaza Strip into a "brutal" attack "on the Palestinians" as a whole. While mentioning those death-tolls, Livingstone has no interest in explaining that the State of Israel builds bunkers for its citizens to shelter in, while Hamas uses Palestinians as human shields and useful dead bodies for the television cameras, to help Hamas appear as an aggrieved "victim."

In pretending that a state, Israel, in protecting itself from a rain of rockets, stabbings and car-rammings in the best way it possibly can, is, instead, committing war-crimes, not only is there a perpetuation of one lie; there is the subtle placing of a kernel of a thought. Why, a naïf might wonder, do these double-standards exist only in regard to Israel, and not to, say, Iran, China, Sudan, North Korea or Russia? Might it be because some people just hate Jews?

Such a comment is also the reason why even if the party pretends to "root it out," it no longer can. What Livingstone said there passed without comment because it is the sort of thing which many MPs in the party and countless members of the party believe. Yet every time they say it, they are propagating a lie. Excusing Naz Shah's comments by saying that they came "at a time when there was another brutal Israeli attack on the Palestinians" parcels a whole pack of lies into one.

That is the problem. It is the narrative of the "left" on Israel that is causing the resurgence of anti-Semitism. It is not coming from nowhere. It is coming from them. If the left wants to deal with it, they first have to deal with themselves.

This op-ed originally appeared on http://www.gatestoneinstitute.org/

Hurricane Irma and Living in the Cone of Uncertainty

Richard Dawkins and Eugenics
Extras In Our Own Epic
Evolution 2.0: The Coming Darwinian Revolution
Chukat 5782: Let’s Play the Blame Game!
Comments
MOST POPULAR IN Current Issues
Our privacy policy