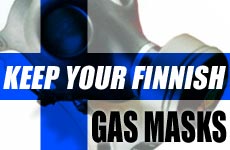 Dear Finnish Foreign Minister, It's a difficult situation and I am dreadfully sorry you are so upset with the Jewish people. We are, after all, only trying to stay alive.

Re Finland's refusal to sell gas kits to Israel.....

Finland refuses to sell to Israel what are considered to be the best gas-detection kits in the world, despite widespread evaluations that Iraq may attack Israel with poison chemical weapons..... Finland claims that the European Union forbids the export of dual-use equipment to countries in conflict.... Finnish Foreign Minister Erkki Tuomioja provides some "background" to the decision, however. "I am appalled at the Israeli policy of suppression, humiliation, subordination and impoverishment towards the Palestinians," he said.

Although we here in Israel will survive nicely without your Finnish gas masks, thank you, I am quite impressed with your sensitivity to moral issues. Morality is a good thing for a political leader to espouse. I'm just wondering... are you also appalled at the Arab policy of "suppression" (i.e. destruction) of the Jewish state? At the "humiliation" the State of Israel is forced to experience at the hands of a hypocritical world? At the "impoverishment" of the Israeli economy and the hardships it endured through years of illegal Arab boycotts? Through the closure of markets to Israeli produce? Through the widespread, mafia-like thievery by organized bands of Arabs throughout all of Israel? (Entire industries exist in the West Bank -- all based on stolen Israeli cars, computers, farm equipment and other vital items.)

Oh yes -- I forgot "subordination". I suppose one might say the Arabs are "subordinated" to Israeli rule. Because they have refused time and time again to recognize Israel's right to exist, and have, time and time again, chosen to make war rather than peace, Israel refuses to relinquish control of historical Jewish land she acquired in a war the Arabs began. For the past 30 years of Israeli "rule," the Arabs have indeed been "subordinated" -- to the highest standard of living of all their Arab brethern throughout the Middle East (with the exception of the ruling Saudian family who are in a class of their own). Their death rate has plummeted; their life expectancy has risen by 50%. Their per capital income has increased tenfold as they and their children opened businesses, built houses, sent their kids to universities, saved money, held down newly created jobs, not to speak of the sudden availability of decent welfare and medical care for the first time in their lives. The number of Arab children attending school has risen by more than 100%. Seven Arab universitites were built in the West Bank under Israeli "subordination" (none had existed under Jordanian suzerainty). During the past two years, they have, with their own hands and by their own volition, destroyed much of this prosperity and in its stead, they are free and independent -- no longer "subordinated" to Israel – under the gracious, advanced, democratic, prosperous and liberal rule of Yasser Arafat and his henchmen. They are in fact free to live in one of the most despotic, cruel, corrupt and despised regimes in the entire world.

The Jewish people are not about to leave; nor do they intend to commit suicide in order to assuage your outraged sense of morality.

In sum, Mr. Tuomioja, it's a difficult situation and I am dreadfully sorry you are so upset with the Jewish people. We are, after all, only trying to stay alive. Even the U.N. gave us its blessing in 1948 (although they've done their best to cancel it since then). I'm even sorrier that the Arabs have been kept prisoners by their own brethern in miserable camps, that they are murderously determined to wipe us out, and that the world is such a difficult, unmanageable place. However, in case you are not sufficiently aware of the fact, I feel it incumbent upon myself to tell you that the Jewish People are home; they are not about to leave; nor do they intend to commit suicide in order to assuage your outraged sense of morality.

If our Arab neighbors are unhappy with us, there are countless other Arab countries who will undoubtedly accept their brethern with open arms, just as we have accepted our Jews (600,000 of whom were refugees from Arab lands). If they are able to make peace with our existence, they will surely prosper in the future as they have prospered in the past. Not only since 1948, or 1967, but in the past 200 years, ever since Jews began returning to the Land of Israel. (It was then called Palestine, which was a tiny part of the Ottoman Empire and never an independent state, in case you've forgotten). The more Jews returned here, to their ancient, biblical home, the more the land itself came alive after 2000 years of desolation and neglect. And the more the Jews came, the more Arab immigration from neighboring countries grew. And prospered. You see, the Jews created the word "prosperity" in the Middle East. With their sweat and blood.

If the newly dubbed "Palestinians" (a name they acquired only in the past 25 years. They called themselves "Arabs" -- part of the great Pan Arabian nation -- before that. And before 1948, "Palestinians" were the Jews who lived in Palestine!) continue on the path they have so far chosen, they will continue to destroy themselves. It really is appalling, but then again, as I said, the world is a difficult place. Finland wasn't always the cultured, civilized, peaceful country it now is either. So there's always hope that the Arabs too will advance, change, develop, and a different, less murderous morality will thrive in the Middle East. Meanwhile, we Jews here in Israel are hanging on and doing everything we can not only to survive, but to grow, and prosper. Even without your superb Finnish gas masks.

And who knows, perhaps you're afraid to sell them. Perhaps you'd rather keep them for yourselves. The world being the chaotic and violent place it is -- you or your friends may need those masks some day. Islamic terrorism isn't limited only to Jews.

Each Name A Promise
Would You Rather Be Right or Happy?
Korach’s Unique Punishment
Who Was Josephus? The Controversial Backstory of the Famed Historian
Comments
MOST POPULAR IN Israel
Our privacy policy