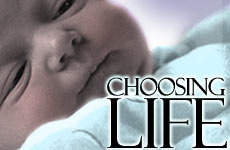 Despite doctors' dire warnings of a problematic pregnancy, a couple decides to go full term.

"I'm sorry Mrs. Luxenberg, it looks like you're going to have to abort the baby. You don't really have a choice."

The doctor approached me with a slight look of disapproval on his face. Things had been proceeding disastrously until this point, and now they'd gotten even worse. An infected gall bladder had progressed into a life-threatening situation. Removal of the wayward gallstone that was causing all the problems had necessitated the use of a heavy dose of radiation, apparently putting the 6-week-old fetus hiding in my womb in mortal danger.

My head started to spin.

"Thank you, doctor. I'll have to speak with my husband before we do anything drastic."

"There's nothing to really think about, Mrs. Luxenberg. Do you want to give birth to a deformed baby?"

I groaned and turned my head away. He took the hint and left.

His words hurt and frightened me. We had invested so much hope in this baby. After losing our first to SIDS after an extensive coma, and our second having undergone a painful and prolonged stay in the neo-natal intensive-care ward, we had been so heartened when I found myself expecting again. All signs had been finally pointing to a normal pregnancy and birth. This baby was supposed to be our comfort, our ticket to normalcy. However, fate had seemed to just throw another curve ball our way, and this was a big one.

Abort? Abort our precious hope? How would my husband react? My parents?

I was in the midst of my reverie when my mind involuntarily rolled back to a conversation I had about a year before with a different set of doctors Same topic, different circumstances.

Our second child, now several months old, had been languishing in the intensive-care ward since birth. She had been diagnosed with a serious and incurable genetic disorder. One day her doctors called us in for an emergency conference. We arrived tense, and were confused to find them in an unusually relaxed and upbeat mood.

"I received the results of the skin biopsy." The doctor started talking before we even sat down. "Very unusual. Either your daughter's disease is more rare than we thought, or else it has disappeared entirely. You're all staying here until we get to the bottom of this."

Either your daughter's disease is more rare than we thought, or else it has disappeared entirely.

The disease, thank God, had vanished. Unbeknownst to these experts, at least until now, there was actually a form of the genetic metabolic disease our baby daughter suffered from wherein the vital process of enzyme production existed, but was merely delayed. After about two weeks, it begins dutifully producing, and the body starts to function normally.

"You should know," our doctors told us as we all gathered for a celebratory parting, "that when we test for these diseases in-utero, we immediately and strongly recommend abortion when the results are positive, as we would have for you had we spotted it then. But from now on we will think twice. If there's even the slightest chance for these children to recover and a lead a normal life, perhaps we should give it to them. Even though you suffered so much, at least it will bring the chance of life to children who may have never been allowed to be born."

These words ran through my mind now, along with a picture of our beautiful and vibrant daughter, as I contemplated my current dilemma. What if her doctors had diagnosed her in-utero? And what if we had listened to their advice?

I tried to focus on the present. Was it really all so cut and dry? First of all, where was it written in stone that all fetuses exposed to radiation are born deformed? Second of all, does that automatically make it right for me to terminate his life?

Yet the image of the alternative, and the pain that it would bring to everyone involved, was totally overwhelming.

WHO ARE WE TO JUDGE?

When my husband walked into the hospital room, my heart shattered as I broke the news. He heaved a sigh and we quietly sat together for a while, absorbing the latest crisis, a position we had unfortunately found ourselves accustomed to.

"Should we? Are we even allowed to?" I asked between sobs. Since Benjy and I had become more committed to Jewish observance, we had discovered that the Torah has very definite and wise guidelines concerning every circumstance, from the seemingly trivial to the most profound.

My husband shook his head. "Miri, I just don't know," he confessed. "But remember what the rabbi told us about Joshua?" He was referring to our first baby, whose life had been painfully brief but extremely meaningful. "How every Jewish soul is precious and has a purpose in life, even if it's beyond our understanding. Perhaps the same applies here as well."

How well I remembered. The rabbi's clear-headed guidance, and warm support of the unconditional preciousness of life had been the anchor which got us through some very tough decisions during our first child's ordeal, until he passed away from his coma after five months.

How many other babies never got the chance -- because their parents took their doctors' advice at face value?

My husband continued to speak, his voice choked with emotion. "Who are we to take away this baby's chance to fulfill his potential, whatever it may be? Who are we to judge?"

I nodded. In my heart I agreed with him. Yet the doctor seemed so sure...

I reminded Benjy about the conversation we had with the doctors concerning our daughter, our second child. "Who would have dreamed that there was a strain of beta-oxidase deficiency that corrected itself? How many other babies had that strain and never got the chance that Rachel did -- because their parents took their doctors' advice at face value?"

My husband nodded and sat quietly, his eyes focusing inward. "Miri, let's call the rabbi back and see what he has to say."

The rabbi confirmed our feelings. After patiently hearing us out and asking a number of pointed questions about the medical details, he responded gently but emphatically. "I know you're in a lot of pain, and I admit that it would be hard for me to remain strong in your shoes. But in the eyes of the Torah, there is absolutely no reason to abort this baby. There is no compelling evidence, neither medically nor in Jewish law, to support an abortion in this case."

He explained how the preciousness and importance of the human soul equally applies to the yet-unborn child. He told us that while Torah law did permit abortion in certain circumstances, these cases were rare, such as when the mother's life would be directly endangered by carrying the baby. He explained that the fetus did possess a soul, and was in many ways, both legally and mystically, a human being, worthy of as much consideration as any other human life.

The ethical thing is to allow him to come into the world, and try to help him live out whatever life that the Creator has planned for him.

"There is every reason to believe that you will give birth to a normal, healthy child," the rabbi assured us. "The doctors may feel that they are playing the odds, but with stakes so high, we must bet on the side of life. And..." he added softly, "even in the doctor's worst case scenario -- an abnormal child -- the ethical thing to do would be to allow him to come into the world, and try our best to help him live out whatever life that the Creator has planned for him."

I found his words sobering, yet encouraging. Indeed with my own eyes, I've seen babies struggle under the most adverse, depressing, hopeless circumstances. I've seen how their life force is so strong, so powerful, that they are able to overcome almost anything.

I hoped and prayed that the baby I was carrying would be able to overcome whatever was destined for him to endure.

I also prayed the same for us.

FROM WORRY TO JOY

A few days later, I lay in my hospital bed when a young intern came "to chat." My decision not to abort had circled the hospital ward and was met with disbelief bordering on disgust.

The woman looked at me with a pitying expression on her face. "I don't understand you," she began. "Why do you want to have a baby when there will definitely be something wrong with it? Is that fair to the baby and to you?"

I was walking on eggshells and tried to carefully explain our decision which was based on Judaism's point of view.

"I hear what you're saying," I began. "Yes it would be uncomfortable to have a baby that wasn't healthy. It seems like it wouldn't be fair, I know. But the baby is already here. His soul has already arrived in this world. I'm not allowed to send him back just because we'll all be uncomfortable. Please understand -- I've had 'unhealthy' babies before, in fact, only unhealthy ones, and from them I learned one thing. It was only their bodies that were weak. Their souls were strong and blazed like fire, and that's really the most important thing. Thank you for being concerned, but please, don't feel sorry for me, or for the baby. We're in good Hands."

His soul has already arrived in this world. I'm not allowed to send him back just because we'll all be uncomfortable.

She shook her head and walked away, confused and at a loss for words. This was clearly a departure from the worldview she had absorbed at medical school.

We packed up and left the hospital a few days later, minus one gallstone and plus one heavy burden, which we tried to carry as gracefully as possible despite our fears. We felt confident that our decision not to abort was not atypical despite the doubts of the medical staff. For any believing Jew who finds himself in a difficult situation, following the Torah's guidelines, no matter how unpleasant or uncomfortable, is a rational and wise response.

Seven tense yet exhilarating months later, I gave birth to a normal, healthy baby boy -- so perfect and so beautiful that people stopped me in the streets for many months afterward, commenting on his unusual beauty.

Benjy and I rejoiced. It seems as though all those doubts and worries had been transformed into prayers and blessings, which had then been abundantly answered.