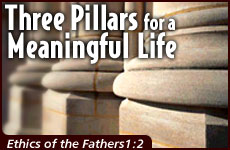 The path to finding permanence in a transitory world.

"Shimon HaTzaddik1 was one of the last members of the Men of the Great Assembly2. He used to say the world stands upon three things: the Torah, the Service and Kindness."

Ethics of the Fathers 1:2

This teaching in Pirkei Avot ("Ethics of the Fathers," Judaism's primary treatise on ethics) comes to teach us how to live a meaningful of life. This is the import of saying "the world stands on three things." Shimon HaTzaddik is not merely saying here's some nice ideas or a witty aphorism. He's saying, "Do this to partake in the very purpose of existence." And knowing one's purpose -- knowing that what one does is purposeful -- is the beginning of ethics because nothing mobilizes the personality like a sense of mission.

A flight to Australia takes roughly 25 hours and there's only one flight out of the local airport. If he misses that flight he'll never make it. He rushes to the airport, runs up to the ticket office and says, barely catching his breath, "I need a ticket."

"Sorry, everything is sold out."

"Take this man, put him in the bathroom and keep your mouth shut."

Undaunted, he dashes to his bank, withdraws $20,000 cash, quickly returns to the ticket office, and approaches the manager, putting the money down on the table. "Listen," he says, "I MUST be on that flight, no matter what! Put me in the bathroom. I don't care! But I must be on that plane."

The manager takes the money, calls the head steward and says, "Take this man, put him in the bathroom and keep your mouth shut."

On the same flight is passenger B, who's a billionaire. Every day millions are coming into his bank account and he doesn't know how to get rid of it fast enough. But he's miserable. His wife just threw him out of his house. His family has disowned him. He feels no affection for anyone. And no one feels affection for him.

Then he gets an idea: "I need some attention. Let me buy a ticket on a long-distance flight and get pampered for a few days." He buys a first class ticket, gets red-carpet service, and lets everyone know he has money to burn. For every glass of champagne he gives a $100 dollar bill for a tip. All the stewardesses buzz around him. He's the most doted passenger in the world.

Of course the truth is the exact opposite. What makes the guy in the bathroom the happiest passenger and the guy in first class the most miserable?

The guy in the bathroom is going somewhere -- not just "anywhere from here." He knows why he's on the plane. He's willing to make any sacrifice to be on the flight. The guy in first class, on the other hand, has no destination, no destiny, no purpose. It doesn't matter how much he's enjoying the temporary conditions, deep down he's the most miserable person on the plane.

We're all on a flight. Some of us fly seventy years, some eighty, some ninety. But it's going to end one day. Some of us distract our minds and kill time. Some of us struggle to acquire a nicer seat. But only if we find a purpose to this flight and do something about it will we find true happiness. 3

Shimon HaTzaddik comes to tell us our purpose. The world stands on three things. Focus on the Torah, the Service, and Kindness and tie yourself into the ultimate purpose for living and experience profound fulfillment no matter your external conditions.

THE THREE PILLARS OF EXISTENCE

Many of us have a tendency to be like the rich guy on the plane, seeking transitory pleasures, rather than like the guy in the bathroom who suffers deprivation for the sake of something beyond immediate gratification. Albert Camus used the Myth of Sisyphus to describe the pursuit of non-existential, material life as the act of rolling a heavy stone up a hill, only to have it roll back down. Indeed, much of life is routine. Much of life can seem futile since we fail so often, and once we do succeed we find ourselves confronting new obstacles. We seem so vulnerable to forces outside ourselves, like government, nature and fate.

Camus concludes, however, that this condition should not lead us to despair, but in fact to an existential happiness, i.e. a happiness based upon the simple beauties of our existence: enjoying a glass of water, the warmth of the sun and most of all the challenge our daily struggles present us with.

Much of the Camus position sounds identical to the struggles Solomon portrays in Ecclesiastes. "There is nothing new under the sun." "What profit a man from all his struggles." "All is vanities… vanity of vanities." Like Camus, Solomon concludes that life has beauty and value. "The light is sweet, and a pleasant thing it is for the eyes to behold the sun." "Rejoice, O young man, in your youth." "In the morning sow your seed, and in the evening withhold not your hand."

The difference is that for Solomon "The end of the matter, all having been heard: fear God, and keep His commandments." All our activities "beneath the sun" -- i.e. rolling the stone up and down the hill -- have meaning because there is a God "above the sun," who made the sun, and for whom all the toil will ultimately be considered, thereby shoving the stone over the hill, once and for all, albeit perhaps not in this life.

Ecclesiastes is essentially a critique of materialism. The sun symbolizes the physical world; it is the source of that life. Everything "under the sun" means everything in the physical/material world. And the author's premise is that no matter how much you think you have, no matter how great you think you are in material terms, you are only sowing the wind. You have nothing in terms of true value and permanence. All is vanity "under the sun."

However, by implication, that which is "above the sun" has true value and permanence. What is "above the sun"? "Fear God, and keep His commandments." Fearing God (the internal person) and doing His will (the external actions of a person) are not only of supreme value, but the only true value, the only thing that counts after we wither and pass away from the "under the sun" world.

Shimon HaTzaddik's activities "upon which the world stands," as described in the mishna quoted above, is equivalent to Solomon's activities "above the sun." Torah and Service are ultimately activities of non-transitory, permanent value for the inner person. Torah is connecting to the will of God for humanity. It is the "blueprint of creation." God "looked into it and created the world." When you engage in Torah learning you are engaging in a primordial form of wisdom from whence the world was created, and hence something that "the world stands upon."

"Service" in the simplest sense refers to the Temple service. The purpose of the Temple was to focus and amplify the experience of God's Presence. Physical places help to focus abstract concepts. One feels the presence of "the Law" when one goes into a Federal Courtroom. One feels the presence of "government" when one goes into a Capitol building.

An act of true kindness is like toppling the first domino; it sets up a chain reaction of good will that transcends the physical act itself.

When the Temple was destroyed, the pillar of "Service" became centered in the synagogue and prayer. Prayer is called the "service of the heart." A "service of the heart" -- relating to God, feeling His Presence -- is a non-transitory activity "upon which the world stands."

Finally, Shimon HaTzaddik says we must ultimately be other-oriented. It's not enough to develop our selves and pay homage to God. We must also contribute to the world of others, helping them in all ways. Kindness (gemilut chasadim in Hebrew) includes charity but goes beyond it to include things like helping others bodily (not just monetarily), comforting the bereaved, visiting the sick, and in general going beyond the letter of the law to be a paradigm of ethics in our interpersonal relationships at work, in the home and society at large.

Gemilut chasadim too, then, is an archetypal, non-transitory activity "upon which the world stands" because the good we do for others is remembered by them forever. One good deed sets in motion other good deeds that go beyond the momentary deed. An act of true kindness is like toppling the first domino; it sets up a chain reaction of good will that transcends the physical act itself.

A great rabbi once said that it is possible to live 80 years and yet hardly have lived a year. Shimon HaTzaddik gives us the secret for really living. He was called the "Saintly One" not only because his was a pious life but also because his was a supremely meaningful, a "three-pillar" life, a life running on all cylinders that went beyond of limited bounds of material life.

1. Shimon the Saint (or “the Righteous One”) lived at the time of Alexander the Great.
Back to Text

2. These were a group of Torah Sages and Prophets founded by Ezra following his return from Babylon to the Land of Israel. They served as both the legislative and judicial branch of the re-established Jewish state, paying particular attention to enacting decrees aimed at strengthening observance and dissemination of Torah, such as canonizing the prayers, formulating the Mishnah and in general fortifying the faith.
Back to Text

3. Thanks to Rabbi Ezriel Tauber for this parable, which is recorded in his Choose Life!
Back to Text

What Do We Need to be Happy?