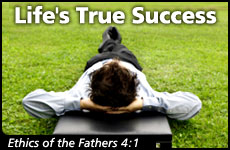 The pursuit of happiness begins and ends with inner peace.

Our mishna speaks first ofwisdom, rather than knowledge or logic or intelligence. Wisdom is the application of the other three, the faculty of directing the power of the intellect and interpreting information to recognize its deeper significance, its meaning, and its relevance to daily life. One may possess encyclopedic knowledge or be able to perform lightning-fast computations yet remain an utter fool. The qualities of wisdom are patience, judgment, and perspective. Many geniuses lack these, and many of average intelligence posses them to a high degree.

The lessons of life are both great and small, and it is a fool who believes that wisdom trumpets itself from the rooftops. Many of life's most important lessons are broad, sweeping concepts of morality and self-discipline, but the subtleties and nuances that instruct us in applying these general principles to the mundane tasks of living are themselves found in life's subtleties and nuances.

"Go to the ant, O sluggard; consider her ways and become wise" (Proverbs 6:5). So said King Solomon, suggesting that the smallest creature can teach us one of life's most fundamental lessons. How much more so every human being. Each person has some quality or characteristic that can be instructive, and the wise man knows that wisdom resides everywhere. Moreover, the wise man's insatiable thirst for wisdom is the surest sign of the wisdom that resides within him. Only the fool is content with his understanding of the world around him.

The assertiveness of the human ego and the persistence of human desire produce a force of almost limitless power. How much have men accomplished, both for good and for evil, through their relentless quest to gain sovereignty over their fellow men? Empires have been built, empires have been destroyed, and still human beings vie for the opportunity to lord over their neighbors. Fortunes have been amassed, only to vanish in the endless quest for more. Families have been built upon the love of wives and children, only to be shattered by infidelities driven by passion and the desire for virile conquest.

True strength is an internal phenomenon. Like a coiled spring containing extraordinary potential power is the one who can keep rein on his passions and his impulses. Rather than unleashing all their energy in a single, destructive outburst, the truly mighty are those able to release their inner power with control and direction manner to create, to build, and to save. It is the inner battle against anger, jealousy, pride, lust, and pettiness that is the proving ground for true power and true heroism.

More than by any other yardstick, human beings measure success in terms of accumulated wealth. The childishness of this standard should be obvious to all, given the endless examples of exceptionally wealthy people who have lived tragically miserable lives, and of people with limited means who have lived lives of fulfillment and contentment. Consider Hetty Green, the notorious miser who died worth nearly a hundred million dollars but saved scraps of soap, and Mother Theresa, recognized by the world for her saintliness, who lived a life of material austerity.

Most instructive is what Ben Zoma does not say. He does not define the wealthy person as one who issatisfied with his portion. True satisfaction is neither possible nor even desirable in this world. It is our unrealized goals and dreams and aspirations that drive us toward achievement and the fulfillment of our potential. Life's only real satisfaction will come with the reward that is reserved for us in the World to Come.

Happiness is a function of the effort we put forth toward the realization of life's goals.

In contrast, happiness is a function of the effort we put forth toward the realization of life's goals. The degree to which we use our innate abilities and acquired resources in pursuit of meaningful goals – when we understand that our purpose in this world is to strive toward purposeful accomplishment – precisely to that degree will we experience happiness, independent of our success or failure.

That others may have more or less than we do has no bearing whatsoever upon our efforts to make the most of our portion. The person who understands this and makes it the guiding philosophy in his life is the person who is truly happy, and truly rich.

When all is said and done, all of us want to be appreciated for who we are and what we have done. If we believe in our own accomplishments – as most of us do – we expect others to recognize our worth and accord us honor in proportion to what we deserve.

In reality, most of the time our perceptions of ourselves are distorted by subjectivity, and others may find less cause to honor us than we find to consider ourselves worthy of honor. Moreover, the world is a place in which superficial wealth, fame, and power – all the things Ben Zoma has taught us not to value – are the source of honor. Even the truly worthy – especially the truly worthy – frequently receive far less honor than they deserve.

Ultimately, it is our own recognition of the value of our deeds that is the greatest reward.

In truth, why should we care what others think about us and what we have done? If my accomplishments are genuinely great, do they become greater when they are recognized by others, or do they become diminished if others are too myopic to see their greatness? Ultimately, it is our own recognition of the value of our deeds that is the greatest reward in this world, and the recognition of the Almighty that will determine our reward in the World to Come.

Far better than seeking honor is to accord honor to others, particularly those whose virtuous deeds go overlooked by many. Within every person resides tzelem Elokim – the spark of the divine image that makes all human beings deserving of respect. By honoring others we honor the Almighty and, at the same time, we confirm our own self-worth.

The one whose first thought is for the honor of others will most surely attract notice and gain honor for himself, both in this world and the next. Similarly, Ben Zoma teaches, the one whose wisdom enables him to see beyond the superficial attraction of wealth, knowledge, power, and honor, the one who directs his greatest effort toward the development of his internal self rather than his external persona, this is the one who will acquire the inner peace that is the ultimate source of incomparable wealth, genuine honor, and true happiness.

I Can Do It

Nothing is Random: Ethics of the Fathers, 4:3
Why My Iranian Mother Didn’t Want Me to Become a Religious Fanatic
The Jewish History of Prague
Why the Sexual Revolution was Bad for Women
Comments
MOST POPULAR IN Spirituality
Our privacy policy
Aish.com Is Looking for Great Writers