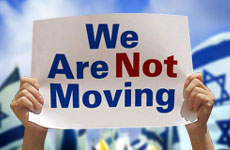 Our enemies seek to destroy more than our bodies: it is our spirit. It is in this that they are most mistaken. Nothing is so indomitable as the Jewish spirit.

We finish Havdalah, the ceremony that separates Shabbat from the rest of the week, with an unspoken urgency; at its conclusion, we will wordlessly dash to the computer to check the news... Has something happened? Was this Shabbat, this day of rest, restful? Or did it take with it another Israeli's life?

And there is the bulletin: "Three soldiers murdered..." by former Palestinian policemen who snuck into their barracks and shot at everything that moved.

I repeat the news aloud and numbly click to American news sites where I know, in some perverted attempt at "even-handedness," the tragedy will be reported differently.

Are they absolutely mad, my deadened mind wonders, these editors who come up with these headlines and photo captions? The deaths of three soldiers awakened from slumber are lumped together with the men who snuck into their barracks and attacked? The attackers' family mourns in an aseptic description – they were passively "killed" when in fact they were themselves the killers?

This is the madness of the way that life in this country is depicted – Israelis are attacked and when –if—we defend ourselves, the deaths of those attacking us are lumped together with our own, as if there is a moral equivalency between a 15-year-old blown to bits outside a disco and the bomber who blew himself up.

The deaths of a child blown to bits and the bomber who blew himself up are not the same.

Today's deaths, though, are different.

Unlike the usual activities of the Palestinian security services and their allies, today's attack was, at least, on soldiers, on combatants.

This is little consolation in a country where military service is compulsory, where even after the three-year stint is completed, men give up several weeks a year to reserve duty. This is unavoidable for a tiny country surrounded by more than a dozen – largely despotic – regimes sworn to annihilate us. This is our reality.

Soldiers here are our brothers, boyfriends, cousins, and neighbors... so it is little emotional comfort, but at least it is within the realm of the conventional rules of battle, something to which our enemies normally pay no heed.

I do not imagine, though, that much of a distinction will be made in the streets of Ramallah or in Lebanon, where tens of thousands danced exultantly in the streets two weeks ago when a Hamas "activist" blew himself up in a pizza parlor, murdering and maiming the usual targets: babies in strollers, pregnant women and families grabbing lunch while out shopping.

So now this Shabbat bleeds into memory and I know that there are three more mothers grieving, more families waiting expectantly for news of their wounded sons. And an entire nation has received yet another blow.

A little more than six months ago, I became an Israeli. Along with voting rights, this gives me the privilege of using first-person, plural pronouns -- "we" -- when referring to Israelis. I am one of them, one of us.

Soldiers here are our brothers, boyfriends, cousins and neighbors.

The reasons I made aliya when I did are complicated – once one decides to become a citizen, it is worthwhile to put it off for as long as possible in order to preserve the package of benefits that comes with new citizenship; I made it some 20 months early. Within a month or two, the circumstances that had necessitated my completing the process had changed and I seriously considered returning the citizenship. I didn't.

I delayed as long as I legally could filling out the final forms and picking up my Israeli identity card. I finally went the day two boys, one an American, went for a hike in the hills south of Jerusalem and had the misfortune to happen upon a group of what the American media calls "Palestinian militants." The boys were savagely beaten to death.

I was numb with pain when I heard this. I sat in my office, unable to work, unable to think of anything except their mothers, their younger siblings... the boys were gone, but their families had to live on with their anguish. And we all had to continue to live in a world that is home to a kind of hate and cruelty most of us cannot imagine.

It is a crushing burden, the knowledge of this hate. Especially when it comes with the realization that it is directed, equally, toward me.

We have to live in a world home to a kind of hatred and cruelty most of us cannot imagine.

What could I do? I did the only thing I could think of: I went and picked up my identity card and signed the forms that made my aliya complete.

It was my response to their hatred.

In the months since, I –along with the rest of Israelis—have been battered repeatedly by the shootings, the suicide bombers, the car bombs and the exploding packages. Have I been near any of these incidents? Thank God, no. Not yet.

But what I understand is that, regardless of the reassurances I give my mother and other friends and family in the states, I am a target.

I still feel safe on the streets of Jerusalem, safer than I would walking the streets of my hometown, but that could –in a millisecond—change if I happened to be in the wrong place at the wrong time.

This is a war. Today, they targeted soldiers. But tomorrow it will be back to babies in carriages.

When this war began, now nearly a year ago, the country was painfully divided along those lines. Public discourse was strident and painful; our divisions more clear to us than our unity.

But a year and some 160 Jewish lives later, our own vision has been cleared by the hatred of those who seek to drive us from here; we see that we are indeed, one.

The Jewish state was founded as a refuge, to provide a guardian entity that could use the powers of a state to protect Jews from those who seek to annihilate or otherwise harm us – wherever we are. Be it in Ethiopia or Entebbe, the armed forces and political power of the Jewish nation would be there to protect us.

To do so is provocative, we are told. And who knows if any retaliation would be effective anyway.

The armies who oppose us are clear. Read their newspapers or watch their TV: they seek to destroy the Jewish nation not by conventional warfare, but by breaking it down slowly from the inside, by making mothers afraid to take their children out to play, by making young couples afraid to go to the movies, teenagers afraid to go to get a slice of pizza.

Ultimately, what they seek to destroy is much more than our bodies: it is our spirit.

It is in this that they are most mistaken. Is there anything so indomitable as the Jewish spirit?

In Deuteronomy, the Torah instructs: "Let not your heart become soft, do not fear, do not panic, and do not tremble before (your enemies)."

The Torah is speaking to soldiers, but the aims of the "militants" have put all of the Jewish nation on the front line.

The more horror and hatred heaped upon us, the more resolute we become. The more clear we are about what we are facing. The more we understand our interconnectedness, the unity of the Israeli nation and of the Jewish people that goes beyond its borders.

The other day, I ran into a neighbor of mine on the bus home.

"You just made aliya, right?" she asked.

I flickered back to the time that I considered returning my citizenship and I was struck with a sense of enormous gratitude: how lucky I am to be here, to be able to assert the Jewish people's right to exist safely within our homeland.

Do I regret it? Not for one second.

Still Crazy: Why We Made Aliyah
Don’t Believe in Other Gods Versus God is One
Seeing Without Eyes
Why Shouldn’t We Eat Whatever We Want?
Comments
MOST POPULAR IN Israel
Our privacy policy
Aish.com Is Looking for Great Writers