We Are What We Say 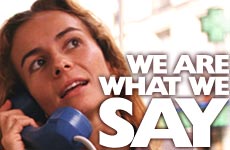 Appreciating the immense impact of those little words we utter.

When I as a teenager was searching for truth as only an assimilated Jewish teenager can, one of the New Age disciplines I dipped into for a while was a system of self-study based on the teachings of a 19th century Russian mystic by the name of Gurdjieff.

Gurdjieff's goal had been that people should "wake up" and become fully conscious human beings, rather than live out their lives as robots.

I joined a Gurdjieff group whose leader (he was Jewish, too, of course, as were most of the other members) took as his central premise this principle:

The behavior which most hinders spiritual awakening is the pervasive human inclination 'to put other people down.'

The behavior which most hinders an individual's psychological and spiritual awakening is the pervasive human inclination to put other people down. The study group's guiding maxim, therefore, was "Don't let a putdown pass your lips."

To me at 19, putdowns didn't seem like such a big deal, and I found it odd to have such emphasis placed on eliminating something that to my mind was just a natural part of life. Nonetheless, as a diligent and earnest young seeker, I took it upon myself to adhere to the rules.

Months went by, and something interesting started happening. This single abstention -- inadequate as my sporadic practice of it proved to be -- increasingly had the effect of casting a disconcertingly bright light onto all sorts of feelings within that had previously been hidden from my view.

It seemed that this one gesture of self-restraint was automatically getting me in touch with something much deadlier.

It seemed that this one gesture of self-restraint -- that of denying myself the luxury of imposing my negativity upon others -- was automatically getting me in touch with the much deadlier negativity I was unconsciously directing my own way.

Not much time passed before God in His wisdom plucked me up out of the sunny West Coast, and, much to my surprise, set me down -- where else? -- in Orthodox Brooklyn.

The cultural milieu could not have been more different, except, to my mind, in one noticeable respect. Just as put-downs had been strictly forbidden during my memorable stint at the self-study group -- whose forty or so members had waged a lonely, uphill battle against the socially accepted, casual denigration of one's fellows -- here was an entire community that made shmirat halashon (literally: "guarding one's tongue") a pivotal, community-wide, institutionalized aspect of religious observance.

The Torah, apparently, had forbidden gossip, slander and derogatory speech quite some time ago -- at Mount Sinai, actually -- well before the advent of California's Human Potential Movement.

A book published just about the time I arrived in New York, "Guard Your Tongue," by Rabbi Zelig Pliskin, set forth for the English-speaking public Judaism's laws governing this area of behavior.

THE SHORTCOMINGS OF GOODWILL

I learned that since human nature is such that we're all experts at rationalization and self-justification, goodwill is insufficient. The commitment to refrain from putdowns has to be buttressed by a subtle, comprehensive network of "halacha" (mandated behaviors) applicable in all the infinitely varied situations which arise in daily life.

The nuances were intriguing. Sometimes, divulging negative information can be essential -- for instance, when it comes to a prospective marriage partner, or a business deal.

Under certain circumstances, saying something positive about someone is the 'wrong' thing to do.

Under certain circumstances, saying something positive about someone is the wrong thing to do -- for example, when it's likely to arouse a listener's jealousy or skepticism.

I was taken aback by this psychological realism in an ancient tradition which, tribally speaking, I could claim as my very own. Aside from its vastly more comprehensive scope, there was an essential difference, however, between what I'd learned in the self-study group, and Judaism's concept and practice of this discipline.

As understood in this observant Jewish community, the focus of shmirat halashon was not me or my enlightenment. At the center was my relationship with God.

As legitimate, noble and desirable as any given individual's personal growth may be, and as effective a tool as guarding one's speech may be along the way to that goal, I gradually learned that spiritual growth transcends any particular individual's quest for liberation.

Whatever I do, privately or publicly, is linked inextricably to the well-being of the community.

Whatever I do, privately or publicly, is linked inextricably to the well-being of the community.

In fact, it's linked to the world beyond my own reach, and to worlds beyond human perception.

To the extent that my mundane daily speech is morally sensitive, to that extent will it promote not only my own psychological well-being but the well-being of -- dare I say it? -- mankind. The little words I utter have infinite significance in the eyes of our Creator.

Refraining from putting people down, and from putting oneself down, is an aspect of our purpose here in the world -- to come to recognize that each and every one of us is nothing less than the Creator's personal handiwork. To insult one of God's creations is to disturb our relationship with God Himself.

Decades passed. I've long since been plucked out of that community in Brooklyn and set down here in Jerusalem, where the ancient traditions are far more deeply rooted than the tall old pine out my window. But I'm still surrounded, as I was back then, by Jews of all ages whose dedication to the goal of guarding their speech is as fervent and sincere as was mine when, as an innocent teenager, I first started looking for truth.

Recently, the annual city-wide seminar for Shmirat HaLashon took place in neighborhoods throughout Jerusalem. An event organized by and for women, it consisted of classes held all day long on the meaning and practice of guarding one's speech, and a mass rally at night bringing together an estimated ten thousand people.

It wasn't the grand opening of a new department store, it wasn't a political party's fund-raiser. It was a gathering of people who are trying to better utilize, in private and in public, the gift which is the identifying characteristic of our species: our amazing ability to speak.

There's a simple question that in general we can ask ourselves when in doubt as to whether a particular remark would be permitted: Would the person of whom I'm speaking be pleased or displeased were this comment uttered in his presence?

With a guideline as self-evident and straightforward as that, why should it be necessary to review the laws of proper speech on a regular basis? That is indeed a mystery of the human soul.
But the good news is this:

If not for the ever-recurring urge to speak ill of others, we wouldn't have this opportunity to refine our characters.

If not for the powerful, ever-recurring urge that's implanted within us to speak ill of others, we wouldn't have this great opportunity to refine our characters, thereby joining God in our own creation daily.

When we curb that inexplicable urge to put others down, we start finding ourselves less frequently in the irritating company of imbeciles, ingrates, and sadists, and surrounded more often, much to our surprise, by fallible, vulnerable, striving human beings who resemble -- how uncanny! -- none other than you and me.

Empires Come and Go: Ethics of the Fathers: 2:7

A Message in a Bottle

The Diet for the Soul: Ethics of the Fathers, 4:2
In the Shadow of David and Goliath
Where Do the Laws of Nature Come From?
Saadiah Gaon, Rashi and Maimonides: How Three Rabbis Revolutionized Judaism
Comments