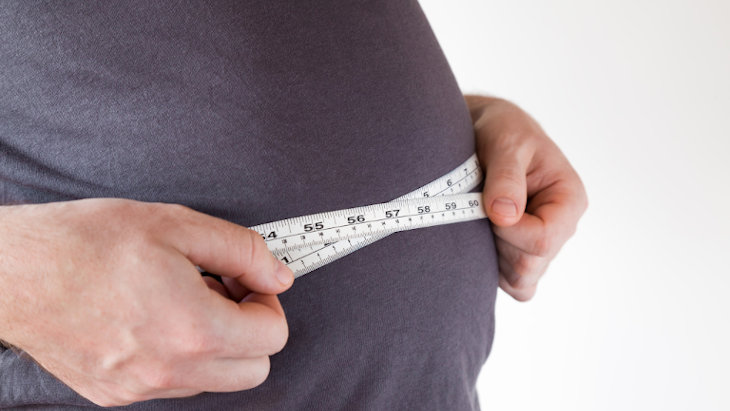 Some helpful thoughts on my weight loss journey.

Since I was little, I had a weight complex. I didn't struggle with my weight; I was just aware that I was fat.

The term “fat” might come across as harsh and judgmental, but that’s what I was. I lived my life shopping in the Husky section as a kid and buying relaxed-fit pleated pants (thank you Dockers) as an adult. There were times in my life when I attempted to slim down, including a fifth grade stint at Weight Watchers, but more often than not, I tried to practice Radical Acceptance and simply accepted my reality as it was.

For many years of my adult life, I maintained my fat weight (the technical BMI chart terminology is Obese), because in my own estimation the sole purpose of losing weight was to look better and I never thought that I looked fat. So I was happy to eat what I wanted and maintain my place closer towards the right-hand side of the BMI chart.

All that changed in January 2019. I had returned from a trip to Israel where I spoke at a school about addiction. I was sent a picture from that engagement and I was shocked. I looked HUGE! While I initially challenged the reality based on the camera angle (the photographer was sitting), the photographer (he wasn’t a professional), and my attire (the relaxed fit shirt and pants were puffed out and distorted my look), I ultimately had to accept the reality: I actually looked fat.

And so, I decided to diet.

I just chalked it up to “whatever,” and planned to continue maintaining my nicely cushioned exterior. Then my wife decided she wanted to lose weight. As a supportive husband, I offered to join with her in her endeavor.

In four months I lost 40 pounds and reached my personal goal weight.

We researched various different diets (now called health management systems – the same old-fashioned diets with better packaging and marketing) and ultimately decided to use a free phone app called MyFitnessPal. There were no restricted or required foods. All you do is enter the food eaten throughout the day, either manually or by scanning the barcode of prepackaged items, and the app keeps track of your calorie tally. The app, which can sync with my fitness tracker, adds calories to my daily limit based upon my exercise. This served to incentivize exercise, since it provided more wiggle room for my daily intake.

On February 4th, 2019 I entered my start weight into the app and began my journey. Just over four months later I reached my personal goal weight after losing 40 pounds. I attribute this progress to both my initiating a regular exercise routine (walking five times a week), monitoring my food intake (which over the four months has changed in both amounts and types of food – who knew that green beans and peppers had so few calories?), and having a partner to keep me on track. I am now working to maintain my weight and healthier lifestyle.

Now fast forward 18 months to the present day, and I can unabashedly report that while I have gained some weight back, I’ve pretty much maintained my new weight and lifestyle. I’ve also had a while to reflect upon my weight-loss journey. Here are some of my thoughts that might help fellow travelers:

1. View your actual weight as a piece of information that doesn't define who you are. The number on a scale does not define you; it's simply a numeric representation of your weight. Just as when you weigh a bunch of bananas at the supermarket, your first response to the outcome is not “those bananas are so fat,” neither should this be the response to the number on your scale. The number is an accounting of weight, not a judgment of you. When you view your weight as more than a number, you introduce strong emotions into your life.

This allows for recognition of a reality without infusion of strong emotions. Noticing the judgments you make related to weight and working to view the number as an objective description goes a long way at preventing feelings of shame related to your weight. Shame is an emotion that arises when we believe a certain experience or behavior would result in rejection by others. In the case of weight, unless we are sharing that number with others, the only rejection we face is from ourselves.

People may internalize judgments from others which can result in self-rejection and unjustified personal shame. Belief that one’s weight is due to a “lack of self-control” stems from the belief that an individual should be able to achieve a goal if they simply try hard enough. Recognition that many factors, physical and psychological, play a role in behavior can assist in easing self-judgment. Similarly, shame for how you look often stems from the notion of an ideal body image promulgated by family or society. That there is a certain way one should look. Working to remove this judgment, while often difficult, can help one reach a point where they are either satisfied with their body or dissatisfied but not ashamed or rejecting of themselves.

If we are willing to simply notice the number and relate to it in the same way we relate to the weight of bananas at the store, then we effectively strip the foundation of shame from the experience (I’ve never seen anyone ashamed by the weight or look of their bananas). The dissolution of shame makes it easier to take responsibility for one’s behaviors and increase the possibility of successful behavioral change.

2. When you judge food, you set yourself up for personal judgment. I remember my first Weight Watchers meeting. After weigh-in, the woman running the meeting provided food education. Her message: Bagels are the devil’s food! She explained that bagels were the worst possible food to eat and were the cause of obesity and weight gain. This level of judgment, unsurprisingly, did not spur change. It simply caused self-loathing. Anytime I ate a bagel after that meeting I viewed myself as aligning with the devil. I was evil.

One of the most helpful aspects of the app was that it monitored calories (and nutritional content). An eaten bagel, then, is represented by an objective number not a judgment. When one looks at food as tangible representations of a calorie number, it makes it much easier to decide what to eat without including an extra helping of self-judgment. The removal of judgement-based emotions related to foods allows one to make rational decisions about which foods to consume in order to attain their dietary goals.

3. Commenting on someone’s appearance requires tact and thoughtfulness. People's reactions after seeing me sans 40lbs really took the cake (Green's chocolate babka, specifically), in terms of entertainment. There were those people who realized I’d lost weight but were unsure of how to broach the subject. There were others who were so worried about offending my pre-weight-loss appearance that they simply ignored the elephant in the room (no longer me…hah). While understandable, it would have been nice to have noticed my success.

There was one interaction that stood out most, in a good way. An individual pulled me aside and asked me very sincerely if I was okay (as weight loss could be a sign of illness). I thanked him for the concern, explained that I had worked hard to lose weight, and that thank God, I was in good health. He gave me a big smile, complimented me on my accomplishment, and shared that I looked great. His attentiveness to my well-being while observing (without judgment) the reality, was the perfect balance. It also laid the foundation for a follow-up appropriate comment.

Here’s to a new year filled with less judgment – about weight, food, ourselves and others – which will likely assist in successful execution of one’s determined resolutions.

Tzachi Rosman, Psy.D. is a licensed clinical psychologist who specializes in the treatment of issues related to addiction, trauma, and self-esteem. Since 2008, Tzachi has worked at VA Hudson Valley HCS in Montrose, NY serving as Staff Psychologist on the hospital’s residential Substance Abuse and PTSD units. Tzachi has a private practice in Teaneck, NJ, enjoys writing articles about Mental Health, and free-building Lego sculptures. He can be reached at yrosmanpsyd@gmail.com

Thank You! 10 Formulas to Master Gratitude

Collecting Diamonds: Ethics of the Fathers, 2:20

Is There Anything You Need?